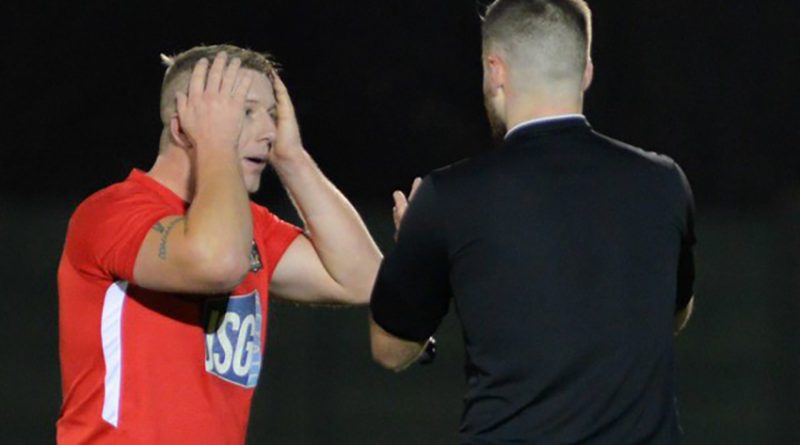 FAREHAM TOWN suffered another league thrashing on Tuesday night as they hosted Brockenhurst, losing 5-1 to the high flying Badgers on a cold evening at Cams Alders.

But Pete Stiles’ men will feel the final scoreline was harsh on them particularly as they had many chances despite a range of different injury absences involving key players, whilst the visitors made a great start and never looked back after gaining an early advantage.

Brockenhurst took the lead after just four minutes but there was some controversary about the finish. A long ball forward was meant to find Silvano Obeng who appeared to shove defender Ashley Tattersall to the floor when challenging for the pass. The referee allowing play to continue and the striker advanced towards goal. Although his shot was saved by new Fareham goalkeeper Dane Rigby, Christie Ward reacted quickest to hammer home the rebound.

In response, Charlie Cooper and debutant Stuart Morgan had curling efforts saved by away number one James Mayo, whilst the visitors nearly made it 2-0 just before the quarter hour mark. Neat passing down the right saw Keiron O’Donnell played through on goal and well placed but his shot was turned away brilliantly by the Town keeper for a corner. From this resulting set piece a header from Joe Chamberlain drifted harmlessly over after being found unmarked at the back post.

The Badgers doubled their advantage on 22 minutes when Ward was able to waltz through a makeshift defence and seemed to be fouled inside the box. Up stepped Obeng who sent the Fareham shot-stopper the wrong way and the ball ended in the corner of the net. But moments later a Fareham attack ended in another penalty.

In an attempt to clear the ball, Mayo had his kick blocked by Cooper and ran behind him towards the net, the Brockenhurst keeper fouling the attacker in a desperate bid to prevent a certain goal. The referee awarded a spot kick and gave the opposing player a yellow card for the tackle, Ben Rowthorn smashing home expertly to reduce the arrears at 2-1. Ross Kidson then hit the crossbar with an effort from a floated free kick with Fareham now on top.

But either side of the half hour mark saw injuries to Cooper and Tattersall, which meant Kai Sterne and Ethan Jones came off the bench respectively. This didn’t halt Town’s momentum, though, as Simon Woods went close with a low effort, with the hosts rueing missed opportunities when Brockenhurst made it 3-1 on 40 minutes. Ward broke free on goal but his effort hit the post, with a rebound falling kindly for O’Donnell to fire home with ease in the final notable action before half time.

Similarly to the first period it was Brockenhurst who started brightly in the second, seeing Rigby foil a low effort from O’Donnell after the winger had been put through on goal down the right side. But there was nothing the Fareham keeper could have done when the visitors made it 4- 1 just three minutes later, a powerfully driven effort from Seung Woo-Hang reaching the bottom left corner with Rigby beaten for pace and power at his far post. This ended the game as a contest with Ward nearly making it five 60 seconds later when he smashed a shot into the side netting.

Fareham’s next opportunity came as Morgan nearly capped his brilliant debut, running through two defenders on his 30-yard drive, eventually having his shot deflected over the crossbar for a corner on the right side. Unfortunately it was only going to worsen for the Creeksiders as their visitors scored a fifth goal on 65 minutes after Obeng passed across the ground to Matt Sheedy, who had only come on for Lyle Simpson, the attacker drilling home into the corner leaving Rigby with absolutely no chance.

Brockenhurst were forced into another substitute as Mayo suffered an injury and was replaced by Matt Taylor on 68 minutes, saving brilliantly from Woods on his first action down low. Moments later a ball found Morgan who also had an effort blocked by the keeper’s legs whilst Sterne fired wide across the six-yard box before drifting wide as Fareham showed some attacking openings.

The best Fareham chance came when a cross from the left was deflected towards the net; a goalmouth scramble falling for two players who both missed the tap-in and the ball was safely cleared away by a defender. Archie Wilcox then wiggled free in midfield and advanced towards goal before his low shot from range was scuffed on its way going past the post for a goal kick. Then Gary Austin came off the bench and the Creeksiders’ made their third and final change with eight minutes left to play.

Obeng nearly sealed a hat-trick as he headed over the crossbar following a cross down the left side but was unable to add to his 26 goals this season. Down the other end, Austin had three late chances to get a consolation goal, firstly shooting wide and then seeing an angled shot saved by Taylor between the sticks. In the final opportunity of the game the striker collected a pass and saw a lobbed shot hit the top of the crossbar and out to safety; referee Lewis White blowing his whistle just seconds later.

Although the final scoreline flattered the New Forest based opponents, it was easy to see why they are second in the Wessex League before their match against AFC Stoneham on Saturday afternoon. Fareham now play table-toppers Horndean at Five Heads Park in an away league game, before hosting Hamble Club on Tuesday night; Pete Stiles’ men looking to arrest defensive frailties following no league clean sheets since September and 10 goals conceded in their last two games at Cams Alders.

Bronze is colour for Gosport boxer