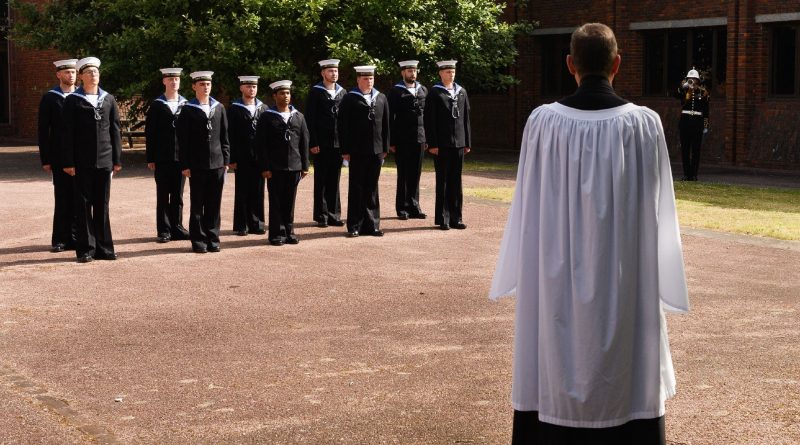 HMS COLLINGWOOD staff held a poignant service late last week as they paid tribute and remembered those affected by a wartime tragedy at the training establishment; which occurred seventy-nine years ago during World War Two and killed dozens of young sailors who had joined the Royal Navy just weeks before.

Just after midnight on June 18, 1943, a single German bomber was flying behind a squadron of Allied Forces planes when it dropped two 50kg high explosive bombs on the training facility on Newgate Lane, Fareham. And although one fell onto the playing fields with little damage caused the second had more deadly consequences for the area alongside the establishment’s history.

Hitting an accommodation hut on the Collingwood site the second bomb caused the death of 33 young sailors alongside causing injuries to thirty eight others, mostly aged seventeen and eighteen years old. They were volunteers serving King and Country, with the majority having been away from home for the first time.

79 years later these sailors were remembered by civilian and military staff who joined together in their annual memorial service, which was held at the exact location of the tragedy. It started with a speech from Reverend Jonathan Backhouse, one of the HMS Collingwood Chaplains; who spoke of the loss of the young sailors and the tragedies of war across the generations since the 2nd World War.

The Establishment’s Base Warrant Officer, WO1 Martin Watson then read out the names of the 33 young trainees who died in the tragedy; which was followed by a minutes silence to respect the deaths and a bugler from Her Majesty’s Royal Marines Band, Collingwood playing the traditional ‘Last Post’.

Concluding the tributes was Commanding Officer Captain Catherine Jordan, who laid a wreath at the site of the accommodation hut; which features a tree that was planted for the fiftieth anniversary in 1993. Ahead of the service thirty three memory cards were tied to the tree’s branches; each one displaying a poppy, a copy of the sailor’s prayer, the young trainee’s name and finally their service number.

Speaking after the service had concluded, Captain Jordan gave her own thoughts as she said: “We will always remember those who lost their lives here during the war. Tragically, they never lived to fulfil their potential and undertake the service for which they had volunteered, but we will never forget their sacrifice.”

PICTURED BY KEITH WOODLAND: Reflecting on loss of predecessors as the Last Post was played.