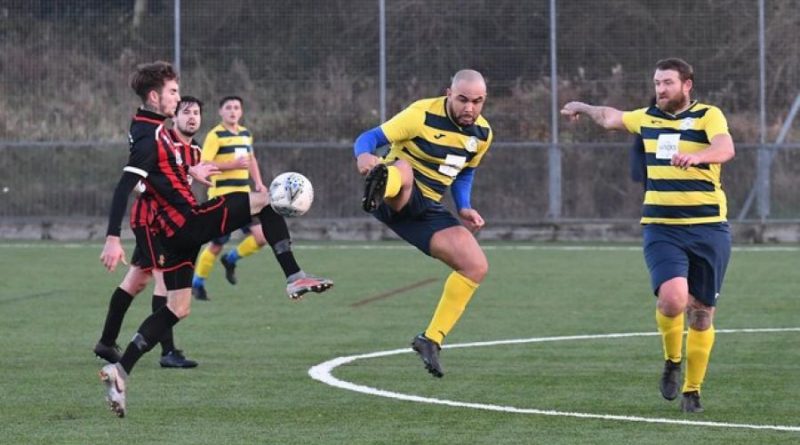 FLEETLANDS FC avenged an earlier season defeat against local rivals Paulsgrove last weekend, ending their Christmas preparations with a five-four win over their mid-table rivals at Cowplain School in a thrilling encounter. Goals from Jamie Wrapson, George Gregory, and a double by former Gosport Borough player Alpay Ali sealed the victory for the Coptermen, although their opponents can take huge positives in defeat given their injury crisis over recent weeks.

Paulsgrove started the better in sunny but chilly conditions, Harry Tindale and Jake Pepall seeing shots saved by Fleetlands keeper Jayden Ridout. Therefore it was no surprise when they took the lead after nineteen minutes; debutant Ashton Leigh latching on to a loose ball and calmly finishing into the bottom corner to open the scoring. Tom Doughty then created space down the middle but saw his driving effort fly harmlessly over the bar from twenty-five yards out.

It was two-nil when Leigh doubled his tally on twenty-nine minutes, the striker effortlessly drifting past a few defenders and fired home a second. Soon afterwards he should have gained his hat-trick when he found himself on the eighteen yard box, but the advancing Ridout was quick to deny him a third goal. In response Fleetlands were looking dangerous on the break and saw their first chance in the 37th minute, Wrapson’s shot brilliantly saved by Connor Revy at close range.

But the Coptermen didn’t give up and were level at half time, scoring twice in a matter of minutes. A cross was headed home by Ali from an angle before the striker was allowed to seize upon poor back passes and slot home into the unguarded net after rounding the diving goalkeeper. And they should have been ahead in stoppage time as the ball was played down the right wing and was crossed into a crowded penalty area, being fired over by Callum Theobald under defensive pressure

The Coptermen started the second half in full flow passing around the 3G pitch surface, taking a 3-2 lead after forty-nine minutes; Callum Smith’s brilliantly placed cross finding the advancing Wrapson at the back post who fired home a well timed corner. Tactical substitutes were further made for the two sides before Fleetlands made it four-two just after the hour mark; Ali setting up Gregory with his incisive sideways pass as the attacker side-footed into the bottom left corner.

But the scoring wasn’t over yet as Paulsgrove made it four-three on seventy-one minutes, a ball into the box wasn’t dealt with by the Fleetlands defence and Leigh took full advantage in sealing a triple. Any hopes of a comeback were dealt a huge blow however with the Coptermen’s fifth goal on eighty one minutes, Gregory converting his second goal of the afternoon with a calm finish from an angle. It was nearly 6-3 moments later as Wrapson fired wide with a curling low effort.

More poor defending from Fleetlands allowed a fourth goal for Paulsgrove and Leigh with five left on the clock; the striker proving his quality after joining from Bognor Regis earlier that week to fill a key attacking position. In stoppage time it should have been five apiece as substitute Keith Martin saw a powerful shot tipped brilliantly onto the crossbar by Ridout who had seen a quieter second half, with the corner cleared away to safety in the final notable action of this league clash.

Fleetlands held on for their first win over Paulsgrove in five years, ending their hoodoo from the end of November 2016 and move up to sixth place in the Hampshire Premier Division after 17 matches in the season played so far. The Coptermen’s next league encounter will take place on January 8, 2022; where they will host Overton United at Lederle Lane with a 2pm kick-off. Games against Lyndhurst and Chamberlayne Athletic will follow to end the New Year period, with no other games announced. 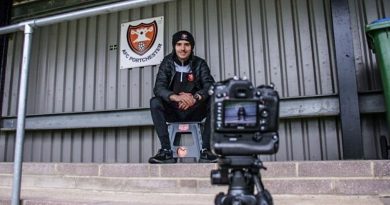