Doubles apiece from Callum Benfield, Charlie Cooper and Gary Austin set the Creeksiders on their way, with Jack Breed and Ethan Jones also scoring to seal a huge margin of victory against their Hampshire Premier League One opponents.

Manager Pete Stiles was aiming to remove memories of recent weeks that included three straight league defeats with their last home game ending in a 5-0 loss to Shaftesbury at Hallowe’en.

Fareham started well, with a flurry of corners in the opening moments, taking the lead after just six minutes from a set piece. The delivery was cleared by Harvest defender Jacob Palmer but Jack Breed was lurking and saw his low shot hit the bottom corner via a slight deflection.  Not content, the Creeksiders pushed for a quickfire second but were denied by great away goalkeeping from Jack Davies, who parried Benfield’s powerful header, Kai Sterne’s effort and a shot by Austin on the turn in a matter of moments.

It was 2-0 shortly afterwards as good interplay created space for Benfield, who hit his effort early and caught the unsighted away keeper off guard with the ball crashing inside the far post. Fareham quickly made it 3-0 on 24 minutes as Cooper advanced forward on the wing and played a delicate pass into the feet of Benfield, who doubled his tally for the night with a calm finish. In response, Harvest looked good in possession, seeing openings from both Remi Cake and Jay Kane but ultimately weren’t enough to test the returning Dan Kempson between the home sticks around the half hour mark of play.

Despite the efforts of Harvest, they couldn’t stop the attacking threats of the Creeksiders who saw Austin going close twice, Benfield’s free kick tipped over the crossbar and Sterne firing over from close range under pressure. But a fourth goal did arrive on 42 minutes as Austin was played through on goal with just the keeper to beat, which was comfortably completed with a calm finish across the diving number one. This quickly became 5-0 just before the break when Breed turned provider as he played in Benfield, who was quick to react to the pass and fired home first time for his second of the goals. The referee blew his half time whistle shortly afterwards, with arguably the only issue for Fareham being an injury to Dan Bennett as the midfielder was replaced by Ethan Jones.

Despite threating attacks for Harvest through Harry Leigh and Mike Granger when play restarted, it didn’t take long for the Creeksiders to reassert their dominance. They added a sixth on the 54th minute. Charlie Cooper was fouled down the right wing with the free-kick taken by Ethan Jones, the effort flying through the hands of Harvest goalkeeper Jack Davis – many feeling sorry for the player as he was definitely the away team’s best performer up to that point. It didn’t take long for number seven either, as Charlie Cooper flicked a header into his own feet and rifled home his first of the night, a reward for a good display from the right winger.

The game then hit a slight lull with substitutions for both sides and no hope of a Harvest comeback, although to their credit they never gave up, forcing some corners with 20 minutes left to play, their best chance coming in the 74th minute as a header by defender Callum Harman was brilliantly saved by Dam Kempson. Down the other end Simon Woods, Austin and Ryan Mackney were all denied by the Harvest goalkeeper in the final 10 minutes as they took advantage of tiring legs in the visiting ranks. An eighth goal did finally arrive on 88 minutes when Cooper broke free to have his effort parried by Davies only to fall back kindly for the winger to slot inside the open net with a rebound shot in the final notable action, the referee blowing for full time shortly afterwards.

Fareham will hope this brilliant and professional performance against weaker opposition stands them in good stead with some huge games in the next few weeks. A short trip to Alresford Town on Saturday awaits the Creeksiders in the league as they look to end a poor run of form in the Wessex Premier, before Fareham host Abbey Rangers in the FA Vase second round proper seven days later at Cams. Three further league games before the end of November which will see high-flying Brockenhurst and Hamble Club visit Cams Alders on successive Tuesday nights, with Fareham also facing a trip to current league leaders Horndean on November 27. 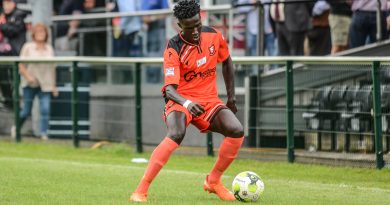