It marks a return to the football pitch for the Creeksiders as they started their 2021-22 pre-season campaign with a foursome display despite many changes by manager Pete Stiles.

It was almost the perfect start as Fareham nearly scored after 30 seconds.

Charlie Cooper running down the right put a low inswinging cross into the feet of Luke Slade who fired wide of the far post.

Moments later recent young signing Dave Parker saw an effort well saved from the Colden Common goalkeeper, who made many saves throughout the afternoon.

But Fareham did take an early lead after just eight minutes following a minor scare down the other end, one of a few for the Creeksiders in the first half.

A home corner was met by an attacker and it took a fine defensive block off the line by Ashley Tattersall to stop Fareham falling behind, before the away side broke away on the counter attack. The brothers Josh and Callum Benfield linked up down the right which ended in a simple finish by the latter into the corner after a cross was perfectly played across the area.

Colden Common almost equalised straight away with a fine passing move after 20 minutes, which ultimately came to nothing as visiting keeper Dan Kempson denied a strong effort by tipping it over the crossbar with a sharp save. This seemed to spark Fareham into life again after a quiet spell with a period of possession, that quickly helped them to double their lead just after the half hour mark.

Luke Slade collected a cross inside the area, before turning and firing the shot into the far corner to make it 2-0; a fine finish in the circumstances of little match action.

Blocks from the Colden Common defensive line denied Callum Benfield, Luke Slade and Gary Austin in a goalmouth scramble before the ball was cleared. However this was just a temporary reprieve as Slade scored with a move similar to the Fareham second goal just before the half time break.

With Fareham making eight changes for the second half, it was only natural that Colden Common started the better against newbies trying to get accustomed to each other’s way of playing alongside a different formation.

However the home side were able to take advantage of many set piece opportunities, allowing Fareham’s fresh legs to reassert control of the proceedings as further pre-season substitutions disrupted the flowing football at times.

Curt Robbins went closest with a volley that forced the away keeper into a great reaction save on 62 minutes before Kai Sterne fired over the rebound.

But it was 4-0 just moments later as Dan Bennett was found in space on the edge of the penalty area, calmly opening his body and curling home into the net to effectively end the game as a contest.

Further attempts by Gary Austin and Curt Robbins went close but were unable to add to the score-line, despite the latter somehow missing an absolute sitter on 91 minutes from two yards as he fired over the bar. That one will definitely be going into the end of the season awards come May 2022.

After Fareham’s solid victory manager Pete Stiles was understandably pleased with the friendly success, stating: “It was pleasing to get a run out once more and try new things and new players although it was frustrating a few more new faces weren’t able to play. I probably learnt more in the second half than the first, but, yeah, it was a good first run out.”

Fareham will now play a home friendly versus Littlehampton Town on July 17 (Saturday) with a 3pm kick off, before the Creeksiders host a Royal Navy side three days later.

Salisbury FC will visit Cams Alders on July 24, before Fareham travel to Folland Sports in a midweek clash later that week to complete the pre-season schedule by the end of this month.

The Creeksiders start their season versus Baffins Milton Rovers on August 3 at Cams Alders before their first FA Cup tie against Street FC four days later.

More photographs from Paul Proctor can be found on: https://paulproctor.smugmug.com/Colden-Common-0-4-Fareham-Town/. 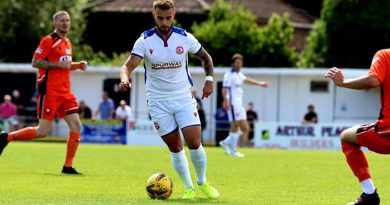