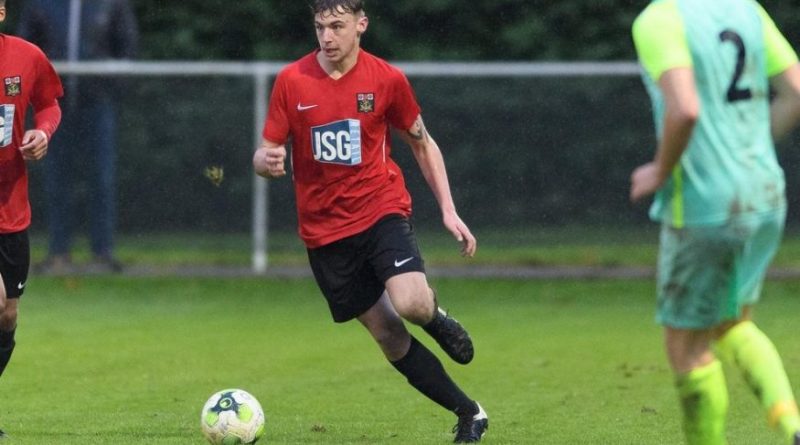 FAREHAM TOWN have asked for financial support as they look to get defender Archie Wilcox back to fitness at the earliest available opportunity, as their star player looks set to be ruled out for the rest of the 2021-22 season after dislocating his shoulder for the third time already this campaign.

The 19-year old suffered the injury in Fareham’s derby defeat to AFC Portchester on Bank Holiday Monday at Cams Alders, in which he made his return to the starting eleven following a similar injury and scored his tenth goal of the campaign in the first half with a looping header into the net.

Although wearing a brace under his shirt offering some protection, he was replaced by Ethan Jones as Portchester launched a stunning comeback to seal local bragging rights; home fans deeming this enforced substitute as a turning point as they let a two-nil lead slip either side of the interval.

And further examination has shown the injury is more severe that originally thought, the youngster now needing an operation to fix his shoulder. It is understood this treatment is needed as soon as possible to avoid further issues that could impact both Wilcox’s playing and working careers.

But with the NHS under pressure due to the pandemic and Wilcox’s tender age, medical experts are reluctant to carry out the operation at this stage. Therefore Fareham have decided to go private and have set up a crowdfunding page using JustGiving to raise the needed funds for this operation.

Requiring a total £5,500 for all treatment to go ahead, the club released the page on Friday morning with details shared on their social media platforms; sparking a huge response from local fans. This did include Portchester and Gosport Borough supporters who were only too happy to help their ex-player.

So far, the JustGiving page has raised £2,945 at the time of writing; which has been raised by a total of 42 donations by friends, family, supporters, and local businesses. Globe readers and football fans can support this cause by donating via this link or contacting the club directly, with the Crowdfunder set to finish immediately after the target has been successfully met.