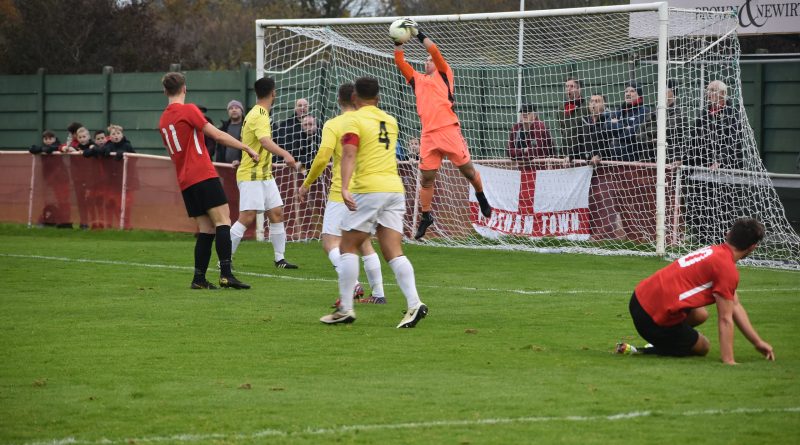 FAREHAM TOWN’S dreams of a record-breaking cup run ended on Saturday as they exited the FA Vase at it’s second round stage; losing five-three against Abbey Rangers in a topsy-turfy cup clash at a packed Cams Alders. But although another defeat for the Creeksiders it was a drastic improvement on recent games, coming back from 3-1 down to level before two late goals for their Surrey based opponents ended a fine run in this non-league competition.

On a great looking surface Abbey Rangers started brilliantly and on the front foot in overcast conditions; taking the lead in just the seventh minute. A long ball forward found Evan Lopes who advanced past Ashley Tattersall down the right side, creating enough space to fire home inside the corner past a diving Dan Kempson for an one-nil advantage. Minutes later pinball in the Fareham area allowed Tom Neale to beat Archie Wilcox, but thankfully his shot was denied by a smart goalkeeping safe down low.

Struggling to contain their opponents it took Fareham nineteen minutes to create their first notable opportunity, a free kick being headed wide by Wilcox who rose highest. Like buses, another chance came the way of the Creeksiders as Jack Breed’s effort was saved smartly by Dease Kerrison at his next post; Charlie Cooper following up with a drive that was cleared off the line by Pat Kirby. Just before the half-hour mark Fareham clinched an equaliser as Gary Austin was played through on goal, making no mistake sending his shot high into the top corner for one-apiece.

On the half hour mark Fareham had a chance to take the lead when good play found Wilcox, whose skidding effort was saved by Kerrison down low with the opportunity smothered. Down the other end Abbey Rangers won a corner down the right with a long delivery reaching George Chandler at the far post, whose downward header beat Kempson and crept over the line for two-one. The visitors made it 3-1 on forty-one minutes when a passing move found Daryl Cooper-Smith and the striker made no mistake in slotting home a finish inside the post, a fine goal that forced huge celebrations amongst a large crowd of away fans behind the goal.

Trailing at the break Fareham started the second half on the front foot as Cooper ran down the wing and crossed into the box with a fine delivery, finding Austin who fired a measured shot that cannoned off the post and away to safety. Although Arjun Jung saw his effort saved by Kempton for the visitors, the Creeksiders ramped up the pressure with quick passing that saw them have two further chances in succession. Cooper’s pace saw him beat a defender down the right and his effort was blocked for a corner, which was headed inches wide by Austin under pressure from Tim Pitt in the air.

But Fareham continued to push and pulled one goal back on 58 minutes, Cooper again causing problems to cut inside before shooting from thirty yards out. The ball smashed against the crossbar and fell kindly to Breed who simply guided his header home into an unguarded net to make it 3-2, with another chance coming shortly afterwards as Wilcox fired over the crossbar from twenty yards just after the hour. Down the other end came a warning shot for the Creeksiders as their pacey winger set up Cooper-Smith who forced another smart save down low, whilst changes in both sides caused a slight lull in proceedings with 20 minutes left to play.

Fareham did get their second equaliser to make it three-apiece on 74 minutes as Austin picked up the ball inside the midfield, advancing forward and playing a side-wards pass into the path of Breed who slotted into the open net from six yards despite a desperate slide from the Abbey Rangers defender. The Creeksiders shortly had a guilt-edge chance to take the lead as a free-kick was played inside the box and fell to Wilcox six yards out, but with the goal gaping he scuffed his low shot as it got stuck under his feet and the ball was dragged wide under pressure.

But instead of scoring a winner Fareham were punished for poor finishing on 84 minutes; Abbey Rangers scoring on a rare second half attack as a period of head-tennis fell kindly to Marcus Williams who held off his marker and fired a snapshot into the bottom right corner to make it four-three. The visitors then absorbed a spell of Fareham attacks as the hosts pushed forward with a couple of free kicks, before unleashing a sucker punch in stoppage time as they got a fifth goal. A long ball down the middle on the break found Jae-Ru Kelly who fired low inside the post and celebrated with their fans, the referee sealing their place in Monday’s draw for the third round shortly afterwards with the final whistle.

Pete Stiles will be rueing a second straight home defeat at Cams Alders and will be most concerned about his defence, with Fareham conceding nine goals in their last two games. And two tough league tests await the Creeksiders this week as they host second place Brockenhurst on Tuesday evening before travelling to Horndean next weekend. Fans of Fareham Town will be hoping that improvements to the performance continue but that the results begin to pick up with the Creeksiders now in mid-table in the Wessex League Premier and now out of both national competitions in a tough start to the season so far. For Abbey Rangers they will learn their Vase third round opponents on Monday afternoon, before playing Hanworth Villa in a Combined Counties Football League encounter. 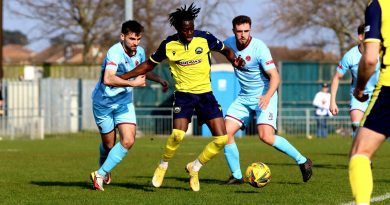