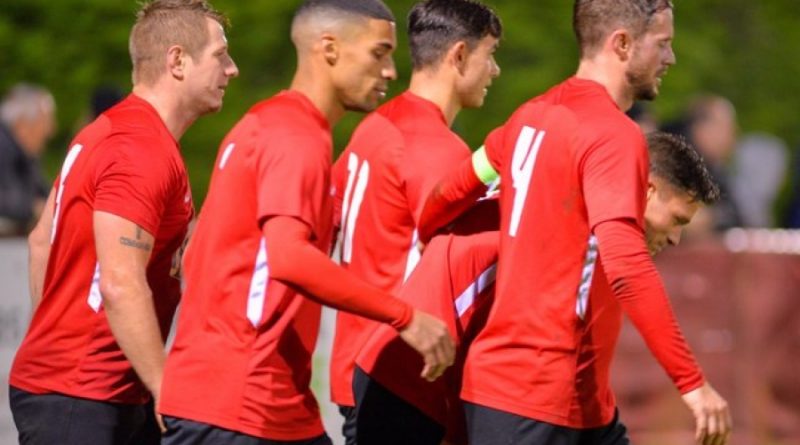 FAREHAM TOWN made it two successive wins and set up their mouth-watering Wessex League Cup semi-final El-Creekio derby versus AFC Portchester in early 2022, beating Division One side Downton by six goals to four in a thrilling match at Cams Alders. Just days after beating Amesbury 8-0, this tie also saw Pete Stiles’ team reach 100 goals scored this campaign as the Creeksiders were taken all the way in this quarter final encounter; needing two extremely late finishes to beat their Wiltshire-based opponents to avoid a penalty shootout and progress to the next round from this quarter-final match.

In raining conditions the underdogs Downton took an early lead after just three minutes, full-back Sam Dibble shooting towards goal with a speculative effort from 25 yards; home goalkeeper Declan McCarthy misjudging the pace due to the wet surface as the ball slipped through his grasp. Although he recovered the effort a linesman raised his flag to signal a goal despite his viewing angle. But Town quickly responded with the equaliser as Stuart Morgan threaded the ball through to overlapping left back Elliott Holmes, who smashed home a side-footed shot across the diving goalie Matt Fredericks.

Morgan and Jack Breed then went close for Fareham as they controlled the midfield area with great possession, but Downton were looking dangerous on the counter attacks and should have scored on the 17th minute; a long ball finding Shaun Prentice who was denied by the legs of McCarthy. But the hosts didn’t heed this warning as the visitors scored on 29 minutes as Prentice provided a cross from the left which was left by Dan Clark and fell to Sam Howe to calmly finish into the bottom left corner. Another chance fell to Josh Cummings but his angled effort drifted wide of the posts after cutting-in.

Fareham equalised again on 33 minutes as a chipped pass was collected by Ben Rowthorn who ran in space down to the by-line and pulled a low cross to find Morgan, who made no mistake firing his left side footed shot into the bottom corner with a calm finish. Buoyed by their second leveller the hosts did dominate the final spell before the half-time interval, Casey Bartlett Scott advancing forward and firing over the bar five minutes later. Rowthorn further fired over under pressure before midfielders Archie Wilcox and Ross Kidson saw efforts saved by Fredericks between the sticks; scores level at HT.

The visitors started the better after the interval as a fine passing move found Howe in space within a crowded penalty area, his shot well parried away by McCarthy for a corner that was easily cleared by the home defence. In response Fareham made a change as Josh Benfield replaced Gary Austin and it proved to make an immediate impact as the former was tripped in the penalty area. A penalty to the hosts was given despite some protests, Rowthorn sending Fredericks the wrong wide with his calmly placed spot kick into the corner. Tom Settle then fired straight into the side netting on sixty minutes.

Downton made it three apiece on 64 minutes as Marcel Laptas broke free down the right and fired a low shot past McCarthy into the net from eighteen yards, with the entertainment unaffected by rain or substitutions. Fareham came back firing and retook the lead on 68 minutes as a long ball was fired goal-wards by Benfield that was saved by Fredericks, only for the rebounds to fall kindly at Morgan’s feet and the midfielder’s effort beat the visiting goalkeeper despite his best diving efforts; Kai Sterne and Curt Robbins entering the pitch as the manager sought to protect their hard fought advantages.

But didn’t seem to work as Downton equalised on 84 minutes when a ball into the box wasn’t dealt with and bobbled into the path of Laptas who lashed home another equaliser. However Fareham did bounce back into an attack and made it 5-4 five minutes later, Morgan winning another penalty that was converted by right back Ethan Jones with a composed finish. The last goal and match winner did arrive in stoppage time as Breed advanced from a counter attack and found Holmes with lots of time to calmly score the Creeksiders’ 102nd goal this campaign; sealing the victory with a last notable kick.

Credit needs to be paid towards Downton who proved that attacking rewards can be reaped if other sides are brave enough, more than matching their higher league opponents in a memorable style as mentioned by many spectators. For Fareham they progress to the semi-finals of this competition and will host Portchester, although no date has been set for this encounter. With two straight wins along with 14 goals, the Creeksiders will now host Dorset-based Hamworthy United on Saturday afternoon in the Wessex League; their final game before Christmas with their next match being on December 27.

PICTURED BY MARTYN WHITE: Fareham players celebrate one of six goals versus Downton on Tuesday 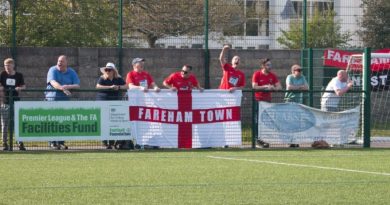