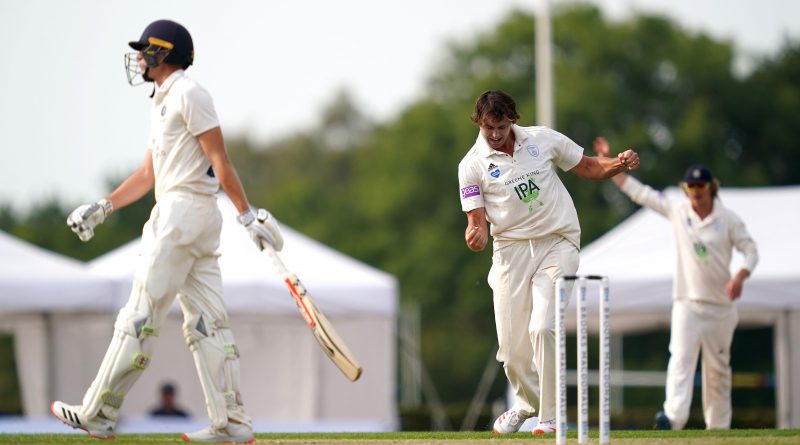 HAMPSHIRE CRICKET have sealed yet another boost to their County Championship title push in 2022, this week securing James Fuller’s signature to stay at the Ageas Bowl for another two summers; making him the sixth first team player to commit their futures to the county after a successful year across al three domestic formats this summer.

The South African born all-rounder had seen spells in New Zealand and English domestic cricket since 2010, Gloucestershire and Middlesex boosting his knowledge of conditions before joining the Hawks in late 2018. Fuller signed a two year contract for the county in October that year and further represented English Lions later that winter.

Making his Hawks’ debut in April 2019, Fuller made an immediate impact upon arriving at the Ageas Bowl featuring through all three formats during his first full season. Throughout the campaign he did take 15 wickets and scored nearly 400 runs whilst cementing a middle-order batting slot, alongside a reliable position as a middle overs role with the older balls.

His contributions helped Hampshire reach a second successive List A fifty-over final as they sadly lost to Somerset in July, although Fuller did score fifty-five unbeaten in the competition curtain-closer that improved his reputation of making crucial runs in the lower order that had previously helped his previous club Middlesex in winning the 2018 red ball title.

Although the 2020 domestic campaign was truncated due to Covid-19 pandemic guidelines, it was a successful one for Fuller as he took a hat-trick for Hampshire against Surrey in the Bob Willis Trophy; becoming the fifteenth player to record this landmark spell for the county. The all-rounder added a successful Vitality Blast Campaign under his belt as he became Hampshire’s top run scorer in the Twenty-20 competition as they did reach the latter stages.

Fuller only featured in two red-ball encounters this summer, but recovered from successive ducks to take two wickets against Warwickshire at Edgbaston in September; Hampshire winning that game by sixty runs in Birmingham. The week afterwards he score 38 runs across two innings and took 1 wicket as the Hawks beat Nottinghamshire in Southampton, before losing their final game away in Liverpool as their title dreams were tragically ended.

But his biggest impact came in the white-ball formats this year, becoming a mainstay in both sides as Hampshire reached the latter stages of both the Royal London One Day Cup and Twenty-20 Blast. His batting and powerful ball striking saw him score over 300 runs combined, with the experienced 31-year old player hoping to continue this form into the next two campaigns.

In a quote on the Hampshire website, Fuller said: “It’s a great feeling. The Ageas Bowl is a place I really like playing, it’s got everything you need. But even more so, we’ve got a great squad and I feel like everything is lining up at the moment and I’m really happy to have extended my contract”.

“We’ve got talented youths coming through who can play without fear, a good core group of guys who have played half a dozen years together and then the more experienced players with a decade or more to their names. It’s a great platform, but if we want to capitalise on this make up and win trophies we will need to work as hard as we have ever worked in this off season and I’m excited because I know this group of players will do that.”

And Hampshire Director of Cricket further expressed his excitement of signing the experienced player to a new extension, saying in a statement online: “James has the ability to change games and has shown that across the formats since he joined. He’s become a really popular member of the squad and we are pleased that he has agreed to continue his journey with us”.