By Connor Steel and Rob Thomas

TWO MAJOR organisations in Gosport have announced their own community projects to help displaced Ukrainian refugees, joining other Hampshire groups and Fareham Borough Council in showing support as the Russian invasion enters its second week amidst intense attacks from President Putin’s military operation.

So far it is believed that 1.2 million residents have fled Ukraine into neighbouring countries, with more expected this weekend as Russia announced a temporary ceasefire in both Volnovakha and Mariupol to allow residents to leave. This started at 7am GMT and is set to end in the coming hours.

Gosport Borough Council has released information in an article on its website about how residents can help financially or by donating essential items and it lists drop off points across the local area including the Town Hall.

The council will receive donations – on behalf of Jacobs Well – between 9am and 5pm throughout the working week (Monday-Friday). However people are asked not to leave donations outside the Town Hall when it is closed in the evenings and at weekends.

Jacobs Well – located at Units 1-2 on Toronto Place – are themselves collecting donations (though not clothes) throughout the week and it is  open between 9am and 5pm daily except Sundays.  It is also available to pick up larger donations from residents, who should email or by phone 02392 583 050.

Basepoint Business Centre – on Aerodrome Road – has also been announced as a drop off point for donations. It is open during the working week between 8:30am and 5pm, and donations should be handed to receptionists at the entrance – again no clothes will be accepted.

Readers are asked to email the council if they are aware of any other local groups that are collecting donations and/or have arrangements for transportation to the region. These will then be added to the article on the council website which will be regularly updated.

Gosport Mayor Mark Hook and Council Leader Graham Burgess have offered support and thoughts to Ukrainians on the town’s behalf, raising the country’s flag in a presentation held at the Falklands Garden  – next to the ferry terminal – last Thursday morning.

Fareham Borough Council has announced it is accepting small donations at its Civic Offices’ reception area. They will be accepted during the working week when the building is open – 8:45am to 5:15pm – and residents are being asked to pack donations into carrier bags for easy transportation, and to ensure they are not left outside when the building is closed.

Executive Leader of Fareham Borough Council, Councillor Seán Woodward, said: “I utterly condemn the horrific attacks taking place currently in Ukraine which has been invaded by the despotic president Putin’s Russia. The council, like many of our local residents, would like to help those affected in any way we can. We have therefore set up a donation point at the Civic Offices as we are ideally placed to collect and forward these donations to ensure they reliably get to those most in need.”

In a separate article on the Fareham Borough Council website, several drop off points have been listed across the town including Robin’s Nest Imporium in West Street, and Café at Zero 5 located in Solent Airport. Readers can access the full list here.

Meanwhile Gosport Borough FC has dedicated its Southern League Premier League game against Hendon this afternoon to the Ukrainian crisis, with their match programme showing a large flag on its cover and inside there is due to be a donations list.

Alongside this special printed tribute, the club has confirmed that 50 percent of all gate receipts from this afternoon’s match will be donated to the Unicef Emergency – Support Ukraine’s Children Appeal. Borough players will also be donating a percentage of their match fees to the cause.

The club has said it is planning its own project to help Ukraine with further news being announced in the next few days. This comes after its successful ‘Feed a family in need’ scheme during the pandemic and more recently the provision of the Local Gosport Pantry which showed great community relationships.

With the crisis in Ukraine showing no sign of an immediate ending, people can also donate to national charity funds such as the British Red Cross and the Disaster Emergency Committee,

PICTURED BY BBC NEWS: Ukraine refugees move across train station lines in desperate bid to escape the conflict, now on day ten at the time of writing. 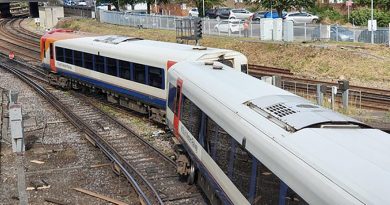