GOSPORT Borough bounced back from FA Cup frustration as they beat Sholing 2-1 on Wednesday evening, inflicting the first defeat on the in-form Boatmen in their 10th game of the 2021-22 campaign.

Bradley Lethbridge did the damage for the hosts at Privett Park on a clear evening in Gosport, with a goal in either half sandwiching a volleyed effort by Sholing on the hour mark. It means that Borough have qualified for the next round of the Hampshire Senior Cup, with opponents and fixture dates still to be settled by the organisers.

Following a minute’s applause to mark the sad death of little cancer patient Sophie Fairfall, it was Sholing who started the brighter on a dry evening as they saw a succession of corners that led to their first chance after two minutes. A set piece was recycled down the right and worked into Claudio Herbert, who jinxed past his marker before firing wide with an angled effort from the corner of the box. But in truth it was a fairly quiet opening 10 minutes as Gosport dominated possession and Pat Suraci’s effort was blocked at source.

On 16 minutes, Gosport saw their first chance of the game as good interplay between Theo Lewis and Jake Wright broke through the organised Sholing defence. However, the latter’s side-footed effort simply went the wrong side of the post. Chances then came for either side as Jake Cope’s cross narrowly missed Charlie Wagstaffe on the wing and Gosport’s Lewis fired over when well placed.

Such was the cagey nature of play as the game hit the half hour mark. There was a surprise when the hosts took the lead as Bradley Lethbridge found space down the right on 33 minutes. His cross-come-shot towards a back post attacker looped Sholing goalkeeper Luke Deacon, hitting the post and crossing the line in the opposite corner. The referee gave the goal as Borough celebrated, with many fans thinking the ball had actually gone out of play instead.

In response to falling behind, Sholing had a succession of crosses into the box with Herbert looking dangerous down the right although they were unable to convert the final shot or ball as they struggled to break through. Gosport then looked to extend their lead as Suraci had two shots from range parried away by Deacon alongside many corners, but the referee blew for the half time interval with no stoppage time added on.

Sholing made a change at the break with Nathan Gray replaced by Josh Carey, which seemed to help as the Boatmen started well. The young striker fed Cope who cut inside and fired over from range before the visitors won a free-kick that smashed the post, whilst the rebound was missed by Jack Barnes from an angle. But the visitors’ pressure continued and got the desired result on 59 minutes as a throw-in was partially cleared to the edge of the box, which was volleyed home by Joe Adams with a wonderful finish.

Credit to Gosport though who responded brilliantly to this deserved leveller, retaking the lead just moments after the resulting kick-off. Good passing left Lethbridge one-on-one with the backtracking Sholing defender in retreat, feigning a pass across goal and then curling an effort low into the bottom left corner with Deacon unsighted, making it 2-1 on 62 minutes. A substitution for Gosport soon followed as Bouwe Bosma came off and was replaced by Nathan Watkins, while Sholing also made changes themselves in response to falling behind.

Proceedings then reverted into a slower tempo as fresh legs took time to settle into the game. But there was a flurry of half chances as Martin Buckland twice went close for Sholing with 25 minutes left. For Gosport a curling effort hit the ‘bus’ from range while Lethbridge came close to his hat-trick on 84 minutes when he broke through to see a slot blocked by Deacon. Lewis was also denied from the rebound by the Boatmen keeper as they pushed for a third and decisive goal. The referee ended the game shortly after two minutes of stoppage time, ensuring Gosport’s progress to the next round and inflicting Sholing’s first defeat this campaign.

Gosport will return to Southern League Premier South action on Saturday when they host Tiverton Town on Saturday afternoon, who lost to Sholing in the FA Cup last weekend. Another home clash versus Wimborne awaits the Borough next Wednesday night (29/09) before a short trip to Dorset when they play Dorchester Town on the first weekend of October. For Sholing, they are due to play Slimbridge in the Southern League Division One this weekend, before they play Cirencester Town away next Tuesday evening. 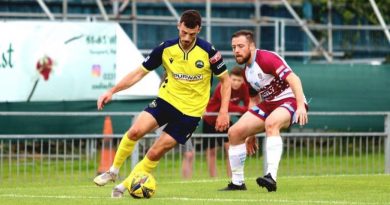 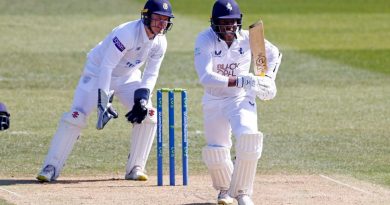