GOSPORT Borough were beaten in an entertaining match versus a clinical Havant & Waterlooville (HWFC) side at the Draper Tools Community Stadium on Saturday afternoon, with all four goals from a 3-1 Hawks victory coming in the first half before a quieter second period.

But it was a good performance by the visitors in overcast conditions against higher league opponents, which also saw many players and staff (including Boro boss Shaun Gale) return to HWFC given strong links between the two ‘local’ rivals from their National League South encounters.

Both sides were attacking and looking lively in the opening 15 minutes with some scorable opportunities at both ends.

Tommy Wright saw the first chance for the home side as he shrugged off a Boro’ defender, before firing towards goal with the ball diverted to safety by the visiting goalkeeper.

Down the other end, Bradley Tarbuck played an inviting cross into the danger area, which narrowly missed the diving feet of Dan Wooden with the goal gaping from six yards.

The two Boro’ dangermen combined again on 25 minutes when Wooden drifted wide and crossed the ball into Tarbuck, who cut inside and shot straight at Havant keeper Ross Worner down low. This opportunity came back to haunt the visitors as the home side scored just 90 seconds later; James Robert playing a precise ball down the wing to find Scott Rendell via a slight deflection, with the striker converting underneath an advancing Gosport goalkeeper.

Borough were level within minutes following a home corner with the ball won by Dan Wooden on the halfway line; the striker advancing towards goal and firing into the net beating Ross Worner after holding off the tackle of HWFC defender Josh Passley. Another fantastic move followed moments later as Rory Williams and Bouwe Bosma linked up down the left, but again the cross was inches away from finding Tarbuck at the near post.

This move was followed by a HWFC set piece that created the second goal for the home side; a free kick from the right by Billy Clifford seeing an initial shot saved, with the ball falling kindly to Sam Magri who simply tapped into the unguarded net from three yards out. A third goal came on 44 minutes as Tommy Wright broke the offside traps and slotted into the net past the outstretching arms of the goalkeeper to make it 3-1 to the home side.

After the break both sides looked to recreate the attacking play from the first half, but often lacked the final ball as the defences dominated the play. An effort from Wright flew inches wide from an angle, whilst another free-kick by Billy Clifford caused a minor panic in the Gosport backline before being cleared to safety on the hour mark as changes caused some disruption to the tempo of the attacking play.

On 67 minutes Adbulai Baggie did well to collect a lobbed pass and cut inside, but sadly his finish didn’t match the build-up as his tame shot was gathered by Ellis Grant in the Borough goal. Fellow Havant replacement Theo Widdrington came even closer to making it four-one, but his 25-yard free kick clipped the crossbar and bounced behind for safety as the game looked to be drifting towards its fore-gone conclusion.

Despite this Gosport still threatened in attacking areas and created two opportunities to pull one back before the end, constant dangerman Dan Wooden taking down a long ball from Matt Briggs, beat a Havant defender and tried to toe-poke a shot under the home keeper who saved with his legs.

On 80 minutes, Tarbuck was able to run through on goal, but saw a low goal-bound effort blocked by the backtracking Joe Newton in the final chance of the game; the final 10 minutes much quieter and saw the injury of Havant’s Jamie Collins disrupting any momentum with little stoppage time added at the end.

It was a good match and Gosport did well to create many chances, but were let down by poor finishing and were overall punished by clinical Havant finishing in an overwise even game on balance.

Borough will now play Lymington Town FC on Monday night at Privett Park following a 0-0 draw in August 2020, before travelling to Hungerford next Saturday in their final pre-season match. They then host Poole on 14/08 in their first Southern League encounter of the new season. 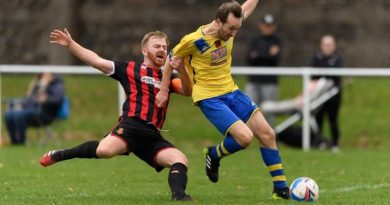