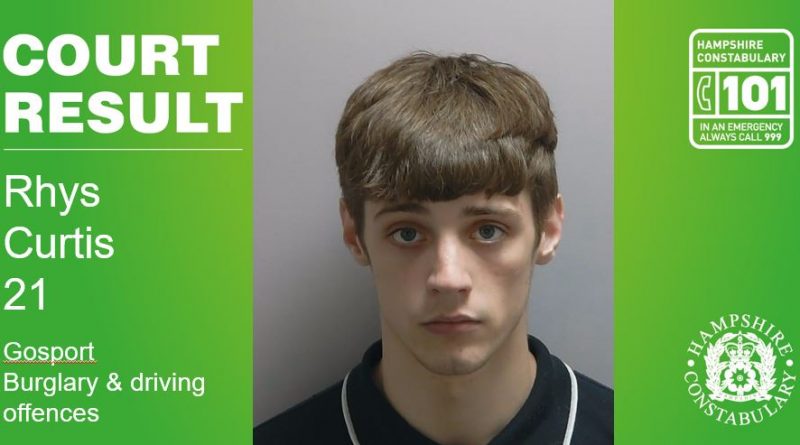 A GOSPORT man has been jailed for 34 months following a burglary and an incident when he crashed into a house while drug- driving.

At about 10.50am on February 11, 2020, Rhys Curtis, aged 21, and 19-year-old co-defendant Max Plaister entered a house on Selsey Avenue, before waking the occupants – who were known to them.

The pair searched the house while making demands for property, and stole around £3,000 worth of jewellery and some trainers.

Curtis, of Mill Pond Road, Gosport, and Plaister, of no fixed abode, were subsequently arrested and charged in connection with the offence by Hampshire Constabulary.

Both denied it initially, however Curtis pleaded guilty to burglary on Thursday, September 30, this year.

Plaister was subsequently convicted of burglary on Monday, October 4, following a trial at Portsmouth Crown Court.

In a separate incident, police were called at around 11pm on Thursday, November 5, 2020, after a Ford Fiesta being driven by Curtis collided with a BMW, a Vauxhall Astra and finally a house on Varos Close.

The collision resulted in significant structural damage to the property.

Curtis then got out of the car and ran from the scene.

He was arrested later that night before being charged with the following offences, which he admitted at Portsmouth Magistrates’ Court on 17 June this year:

Appearing at Portsmouth Crown Court on Thursday, October7, Curtis was imprisoned for 34 months, and handed a 21-month driving ban. Plaister will be sentenced on December 12.

PC Charlotte Pocock said: “These were all very serious offences, and I am pleased that both defendants have been convicted.

“Rhys Curtis’s behaviour in November 2020 resulted in an incredibly reckless incident which could have killed someone or left them seriously injured.

“The vehicles that were crashed into were written off, and there was a hole in the wall of the house, leaving the property with significant damage costing thousands of pounds to repair.

“The impact on the victims in this particular case has been life-changing.

“Too often people do not think of the consequences of getting behind the wheel of a car and driving illegally. I hope this case acts a reminder to everyone of the devastating impact that driving illegally can have.”