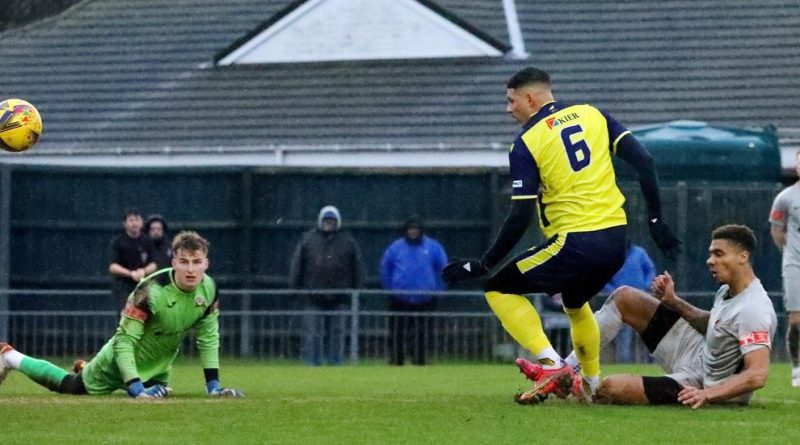 GOSPORT BOROUGH continued their perfect start to 2022 by clinching a narrow one-nil victory against Walton Casuals on Saturday afternoon, avenging their defeat to the same opponents back in August. Mason Walsh scored the winner in pouring downpours and terrible weather conditions at Privett Park to seal three points for the second time this year, building on their fantastic 5-0 thrashing of local rivals Salisbury on New Year’s Day.

It was the hosts who adapted quicker to the slippery and heavy surface in the first ten minutes of play, recovering from an early Billie Busari injury stoppage to see good attacks sniffled out by a good defensive effort. They created their first opportunity after 13 minutes from a corner as the ball fell to Mason Walsh, whose 15-yard low drive was gathered by Walton goalkeeper Jacob Adams. Down the other end Adam Liddle fired went wide and the visitors won quickfire set pieces with little effect in a scrappy opening spell.

Liddle and Rohdell Gordon linked up on 19 minutes with some good possession that was ended by a brilliant tackle from Harvey Rew, but in truth Gosport were the better side as they continued to put dangerous crosses into the box and were simply unable to get a final touch with Walton defending well. On 29 minutes they created their best chance of the afternoon as Walsh’s stinging effort was parried by Adam and the ball looked to be heading towards Briggs, who was denied by a stunning defensive block by Jerry Wiltshire and the referee to everybody’s surprise gave a goal-kick.

Walton created their best opening just after the half-hour mark as home goalkeeper Albert White was beaten to a long ball by Liddle, whose attempted lob was cleared off the line by Briggs. Shortly afterwards Joshua Huggins picked up a knock that saw another injury stoppage whilst Mike Carter was booked for a foul on Tarik Moore-Azille running through midfeld on 40 minutes. A final chance before half-time saw Walsh drag a shot wide on the turn in stoppage time, ending a goalless first half.in which neither goalkeeper was really tested.

Gosport started brightly after the break as good interplay ended in Busari stinging the gloves of the away keeper within sixty seconds, Dan Wooden glancing wide of the far post moments later. But the visitors were looking dangerous on the counter attack and they themselves saw their best chance in the fifty-first minute, Gordon cutting inside on his stronger foot before unveiling a curling shot that forced White into a diving save; both Bradley Keetch and Liddle also firing over before the hour mark.

And after Walton had made two substitutes, the hosts took the lead on sixty-seven minutes. From a visiting corner Gosport hit on the break through half-time replacement AJ Harris-Sealy who played in Harry Kavanagh on the overlap. The right-back’s low cross was played into the corridor and missed a crowded penalty area, finding Walsh unmarked at the back post to tap into the unguarded net; sending the majority of an 543-strong crowd into relieved celebrations. In an extremely similar attack moments later saw Wooden’s shot blocked as Gosport sought to score a second that would have definitely killed the game.

But Walton had other ideas and launched a spell of pressure that saw multiple chances in the last 20 minutes, which started with Liddle’s shot being deflected and brushing the crossbar on seventy-three minutes. Moments later Ansu Janneh and Gabriel Odunaike linked up down the right with the latter dragging wide, whilst Tom Bird was denied a penalty after slipping when through on goal under pressure. The final chance fell to Walton on 89 minutes when Liddle’s floated cross hit the crossbar before bouncing safely away, Gosport surviving three minutes of injury time with good game management tactics as they won niggly free kicks; allowing them to seal the points and another clean sheet without much drama.

Gosport have now overtaken Chesham in the Southern League Premier and sit in fourth place after 25 matches, although other sides have games in hand and saw fixtures cancelled this weekend. The next test will see Shaun Gale’s men travel across to Poole next Saturday before hosting 3rd place Hayes & Yeading, Harrow Borough and US Portsmouth at Privett Park over a seven day period. They will then end January with an away trip to the Met Police, who currently sit second in the standings as some times enter the final third.

PICTURED BY CHRIS MOORHOUSE: Matt Briggs couldn’t convert the rebound after a shot is parried in the first half due to a great block by a defender