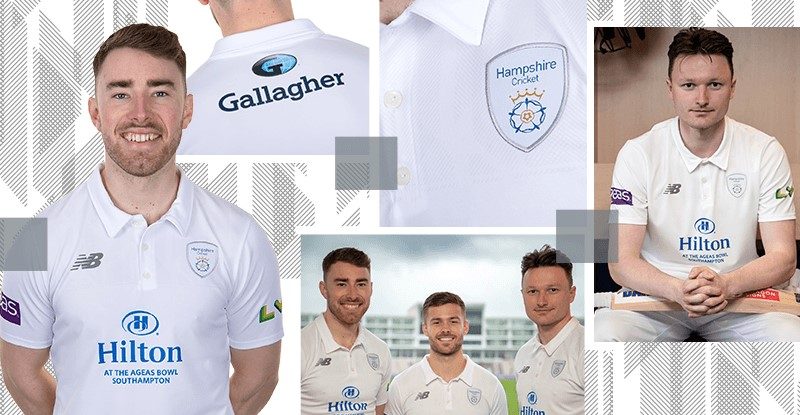 HAMPSHIRE CRICKET have unveiled their new kits for their County Championship and Royal London One-Day Cup campaigns this weekend, sharing marketing photographs and details on their club website for supporters to pre-order immediately.

The County Championship kit follows the traditional white for first class cricket, which features alongside a subtle grey underlay on the design. More obvious is the change in sponsors from Greene King IPA to Hilton for the 2022 summer campaign.

In contrast navy will be the primary colour for the Royal London One Day campaign with yellow trim featuring in the design seen in this link; the only change being simplicity of lines and abstract shapes with no changes of sponsors in the form of Showcase Cinema De Lux.

Both kits have been created by New Balance and feature the various competition logos on the sleeves; with supporters able to pre-order from the online store with all purchased shirts available for delivery or collection from the week starting March 28.

For every shirt purchased Hampshire will be donating £5 to Southampton Hospitals Charity as seen in 2020 and 2021; the club continuing their support of the NHS and the construction of a specialist rehabilitation space within the General Intensive Care Unit at University Hospital Southampton.

Hampshire’s first appearance in their new County Championship kit will be the pre-season friendly versus Loughborough UCCE on March 28, before stating the Division One campaign against Somerset in Southampton from April 7 (Thursday) before travelling to Surrey seven days later.

Supporters will however be forced to wait for their first showing of the Royal London One Day kit, with this competition not scheduled to begin until August. Hampshire will open their campaign versus Worcestershire at the Ageas Bowl on August 5, before travelling to Kent two days later.

No new kit designs have been unveiled for Hampshire’s Vitality Twenty-20 campaign, although it is expected to feature yellow as a primary colour and navy blue for extra detail. The Hawks will open their quest for glory on May 27 versus Middlesex at the Ageas Bowl.

PICTURED BY HAMPSHIRE CRICKET: Marketing photographs showing the new kit for the 2022 County Championship campaign starting in less than three weeks at the Ageas Bowl 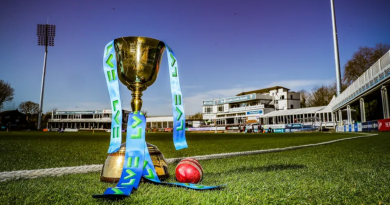