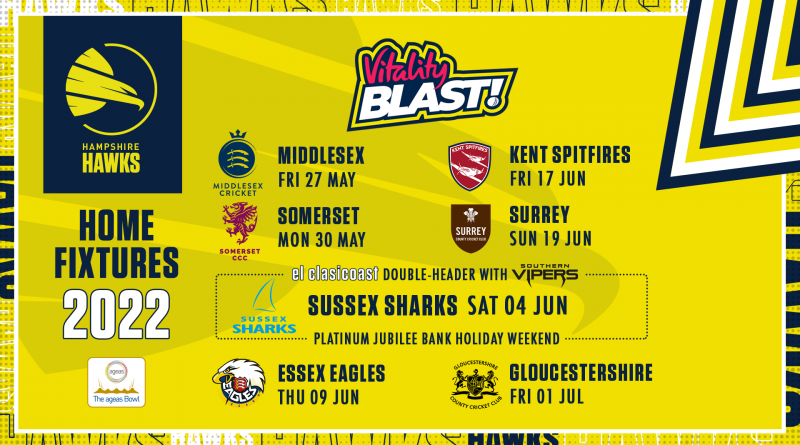 HAMPSHIRE CRICKET have announced their home fixtures and ticket information for their 2022 Vitality Blast campaign, with special deals and prices available to supporters as the Hawks try to replicate their successfully dramatic run to the competition’s finals’ day last summer.

The Hawks will play seven home clashes at the Ageas Bowl as part of the Southern section of the group stage; hosting Middlesex, Kent, Somerset, Surrey, Sussex, Essex, and Gloucestershire. Fixtures will be played between May 27 and July 1 including a Bank Holiday double header in June.

It follows the recent release of County Championship fixtures amidst a reshuffle of the cricket summer calendar, which comes into force in 2022 following the England international test side’s four-nil Ashes defeat in Australia. The changes include more red-ball cricket over the summer months of June and July, meaning the Blast wil start in May.

Most Blast games will be played on either Thursdays, Fridays and the weekends in order to be more supporter friendly; with the final round robin encounters to be played on July 3. The quarter finals will take place between July 6-10 before a sold-out finals day will feature two semis and the final at Edgbaston on July 16.

Following the announcement of fixtures the county have now offered a range of ticket deals for the competition, including that 2021 Hampshire Members (excluding standard members) can access all Hawks Vitality Blast group fixtures as part of their Membership by simply scanning their Membership card upon arrival at the gate.

Non-members can also secure their spots to all seven twenty-20 encounters using their new 2022 Vitality Blast Passport; available for just £99 courtesy of the ‘Super Early Bird’ discount. This will run for a limited time before an early bird price of £109 and an advanced £119 ticket price for admission to the matches, with the link available to purchase here.

The Hawks are hoping that the sales of ‘passports’ follow the success of 2021, in which all they sold out and fans were able to access the seven Vitality Blast matches throughout June and July. This was despite the capacity restrictions in stadiums and sporting events due to an extension of Government rules due to the Covid-19 pandemic.

Supporters can also register for priority ticket access for one-off or certain games by signing up via the link here. This allows many fans to join a ticketing period beginning on February 10th before Vitality Blast tickets go to general sale on March 8th, alternatively registering their interest in a mailing list for advertisements via the link here to keep in the loop.

Hampshire have also confirmed that similarly to 2021, a refund promise will further apply for the 2022 season. This means that fans purchasing tickets could be refunded if a match is cancelled, played behind closed doors or with reduced capacity due to any Covid-19 rules. More information on this promise can be found on this link alongside other regular questions.

And finally fans can also register for hospitality packages for all seven Blast games via the link, with VIP experiences across the stadium such as the Robin Smith and Hilton Suites. Prices range for each encounter from £99; which include a two course meal, complimentary bar, post-match snacks, premium suite seating and a parking pass. 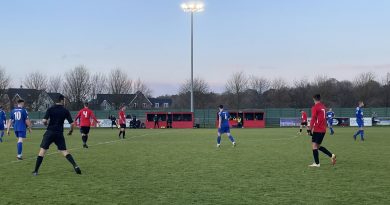