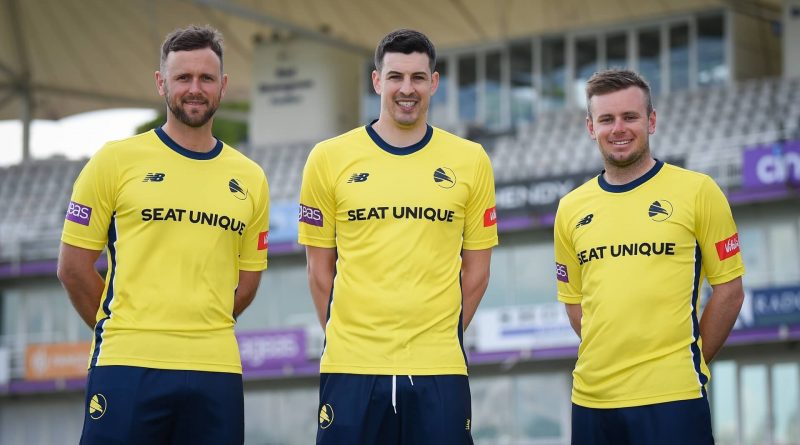 HAMPSHIRE HAWKS have unveiled their new strip for the upcoming Vitality Blast competition this week as they prepare for the 20th edition of the short-format cricket contest due to start in late May, again using a yellow and navy theme throughout the kit to be worn by the team this summer.

Created by New Balance and sponsored by Seat Unique, the shirt features a yellow dominated but simplistic design that removes stripes seen on the 2021 version; navy trim being used down the sides and for the collar, as well as the official Hawks logos and sponsors on both sides of the kit.

Similarly to 2021 the trousers of the kit are navy coloured with o yellow used for the logo, which also follows the colour schemes of previous strips with the Hawks rebrand coming in 2020.  White is also used as a trim shade alongside for the drawstring on the trousers, which can be adjusted by fans and players.

Replica shirts can be brought on the Hampshire online shop, costing £50 for adults and £45 for junior size with all products available to buy from Wednesday (April 27). As seen in the last two years and County Championship / Royal London One Day kits, £5 from each one sold will go to the NHS.

Supporters will get their first glimpse of the kit in action on May 27 (Friday) when Hampshire host Middlesex at the Ageas Bowl as they open their quest for glory; having reached the Vitality Blast semi-finals held at Edgbaston where they lost to Somerset in a thrilling encounter back in September.  They will then host Somerset the following Monday before travelling to play Essex Eagles at Chelmsford twenty-four hours later.

Currently Hampshire Cricket are in action with Lancashire in the County Championship, this game being played at the Ageas Bowl and is evenly poised going into day three on Saturday. The scorecard from this match, the fourth of the 2022 campaign, can be found via the BBC Cricket link available here.

PICTURED BY HAMPSHIRE CRICKET: Hawks’ players show off the kit for the 2022 Vitality Blast campaign.