A POIGNANT service was held recently at HMS Collingwood in Fareham to remember young lives lost in a wartime tragedy at the base 78 years on; which was one of many tragedies during WW2 across the local area.

In the early hours of June 18, 1943, a lone German bomber, flying behind a squadron of British planes, dropped two bombs on the training establishment. One of these fell onto the playing fields but the other had more deadly consequences, hitting one of the accommodation huts, killing 33 young sailors and wounding 38 others. They were all volunteers, signed up to serve King and Country, and most were just 17 or 18 years old. Often, this would have been their first time away from home, having been in the Navy for just over a fortnight.

Now, 78 years later, civilian and military staff alike joined in a memorial service to remember the lives lost in the tragedy and to observe a minute’s silence. the Rev Roland Wort, one of the Collingwood chaplains, spoke of the importance of keeping the memory of those lost and injured alive even though it was so long ago, before WO1 (Warrant Officer) Martin Watson read out the names of the young trainees who died.

The service was made even more poignant this year thanks to families of three of the young sailors who supplied photos and letters sent home by their relatives just before they died. These were displayed alongside a wreath consisting of 33 hand-made poppies, one for each of the lives lost.

Afterwards, Captain Catherine Jordan, Collingwood’s Commanding Officer, laid a wreath on the spot where the sailors’ accommodation hut had stood. Today, a tree stands as a permanent reminder of the tragedy and this year, memory cards were tied to the branches, each one displaying a poppy, a copy of the sailor’s prayer and the young trainee’s name and service number.

Speaking after the service, Capt Jordan said, “It is important to remember the sacrifice of these young sailors who were just at the start of their wartime naval service when they tragically lost their lives. They are part of HMS Collingwood’s legacy. We will never forget them. 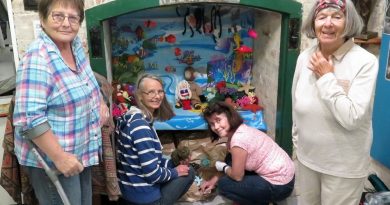