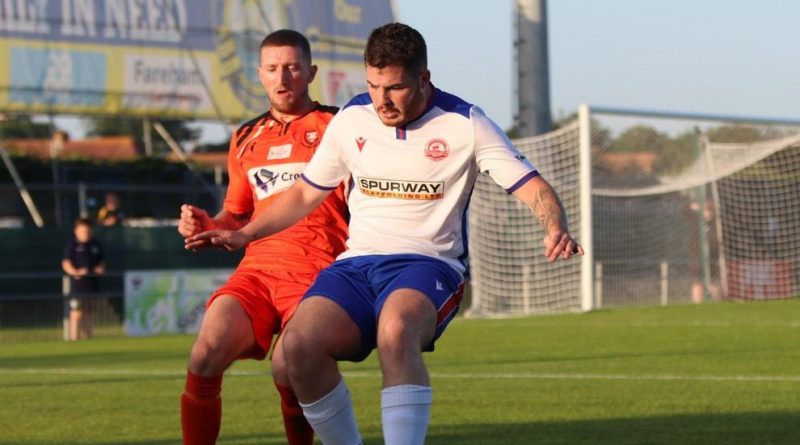 AFC PORTCHESTER have boosted their striking options in their charge to Southern League promotion this summer, confirming the signing of young Gosport Borough striker Bradley Lethbridge on a dual signing until the end of the current 2021-22 football campaign due to finish in late April.

The former Portsmouth trainee, now twenty-one years old, joined Shaun Gale’s side in July 2021; signing from local side Bognor Regis with excitement from fans and staff alike. However limited appearances due to injuries and other issues has affected his time at Privett Park in the first six months.

Lethbridge has only made six on-pitch displays this season in competitive action, scoring his first two goals for Gosport in their Hampshire Senior Cup victory over Sholing back in September. He has seen added a goal in their 11-1 win over Paulsgrove and a double against Portchester themselves back in late November.

And now Borough have let Lethbridge move to the On-Site Group Stadium in order to improve fitness and allow the attacker get valued match experience; having only made scattered appearances at Fratton Park in the Papa Johns Trophy, scoring just the single goal versus Oxford United in 2019.

He will now join Dave Carter’s side as a backup and option to Lee Wort, who has taken the strain of the scoring this year with 27 goals across all competitions for the Royals. Other competition includes Marley Ridge, George Barker and Rafa Ramos, who recently joined and scored twice versus Fareham.

“We’ve got a good frontline, it’s where we’ve throughout the season, we’ve got plenty of defenders but come a bit short with goals over the season. We’ve relied on Lee Wort a lot this season. It’s a view for next season as well, that’s what we’re looking to build for, he’s dual-signed (Bradley) so we’ll assess things in the summer. Hopefully we can get him enjoying his football again, get him a bit fitter, and scoring goals.”

Dual signing is popular in non-league and means that non-contract players can sign for another team without leaving their original side; offering freedom for teams in case of injuries, Covid-19 absentees or if two clubs agree a player could benefit from more game-time in a different or varying league level. Lethbridge can play for either side this season before the deal is reviewed again for the 2022-23 campaigns.

But sadly Portchester supporters will have to wait for Lethbridge’s debut at the On-Site Group Stadium as his self-isolation for Covid-19 finishes on Friday, just twenty four hours before the Royals’ home clash versus Alton on Saturday afternoon following last weekend’s weather related postponement.

However the striker is likely to feature in Portchester’s Hampshire Senior Cup quarter final against Hartley Wintney, which will take place on January 18 at the On-Site Group Stadium against Southern League Premier opposition. The Royals are then scheduled to play Stoneham away from home on January 22.

PICTURED BY TOM PHILLIPS: Lethbridge holds up his new strike-partner Lee Wort during Gosport’s pre-season encounter versus Portchester at Privett Park in July 2021.