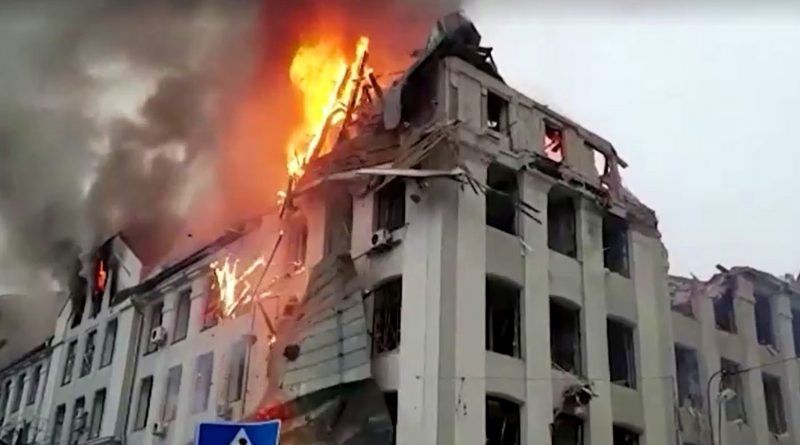 BOTH GOSPORT AND FAREHAM MPs have offered their support to the Ukrainian people over recent days, with the Russian invasion now hitting one week since it was launched by President Putin last Thursday (February 24); despite the best efforts of negotiators in the build up.

At the time of writing it appears that Russia have only taken one key port city, Kherson, located in the South of the country; which is due to heroic fighting efforts by Ukrainian citizens as they repel attacks in at least eight others including capital Kyiv, Mariupol, and Dnipro.

However this has come at a cost with over one million refugees either displaced or fleeing Ukraine into neighbouring councils such as Poland, whilst citizens have been killed as explosions hit many cities. On Tuesday high precision missiles hit the main television tower in Kyiv killing five and the city’s main Holocaust memorial was also targeted.

It is not clear exactly how many people have been killed or injured in this conflict so far, with both countries releasing varying figures over recent days. But the potential for more casualties and bloodshed remains lightly with no sign of a ceasefire despite peace talks on Monday.

In response the Government have announced fresh sanctions on Russia including the ban of their ships from UK ports and restrictions on financial transactions with their Central Bank; a move that is aimed to isolate and suffocate the ‘war machine’.

These new measures were welcomed by opposition MPs and Tory backbenchers on Monday after a statement by Foreign Secretary of State Liz Truss, whilst the Commons gave Ukrainian ambassador Vadym Prystaiko a rare standing ovation before Wednesday’s session of Prime Minister’s Questions.

Citing her government’s firm approach, Dame Caroline Dinenage wrote a short statement that featured as part of her monthly newsletter to Gosport released on Tuesday evening; in which she said her thoughts were with Ukraine and that she would keep her website updated with the latest information available.

The full comment by the Gosport MP reads as follows: “My thoughts and prayers are with Ukraine in these desperate times. We must continue to support the Ukrainian Government and its brave people in the face of this horrific assault by Russia.”

“Valdimir Putin cannot be allowed to get away with this unprovoked, premeditated and undemocratic invasion. The UK government have been clear all along that there would be a severe cost for any further Russian military incursion into Ukraine and I am pleased that they have announced a package of severe sanctions on Russia.”

It concludes: “A number of constituents have already contacted me about family members who need help and many others are keen to find out what they can do to assist the Ukrainian people.  I will be keeping my website updated with the latest information. If you need any assistance in the meantime, please do not hesitate to get in touch.”

Neighbouring Fareham MP and Attorney General Suella Braverman continued this tone in a short statement released on her website, in which she said: “President Putin has unleashed a full-scale invasion of Ukraine by land, sea and air. This is a premeditated and wholly unprovoked attack on a sovereign democratic state.

“My thoughts are with the Ukrainian people and their President, whose defiance, courage and patriotism in the face of foreign aggression is inspiring. The UK and allies have been clear all along that there would be a severe cost for any further Russian military incursion into Ukraine.”

The statements follow a week in which local communities, as reported in the Globe, have launched fundraising and donation packages for Ukrainian refugees; the first packages due to be sent to Poland this weekend if all goes ahead as planned with donations soaring.

PICTURED BY SKY NEWS: Explosion hits building in the North-Eastern city of Kharkiv as fighting intensifies one week on from start of Russian invasion of Ukraine.