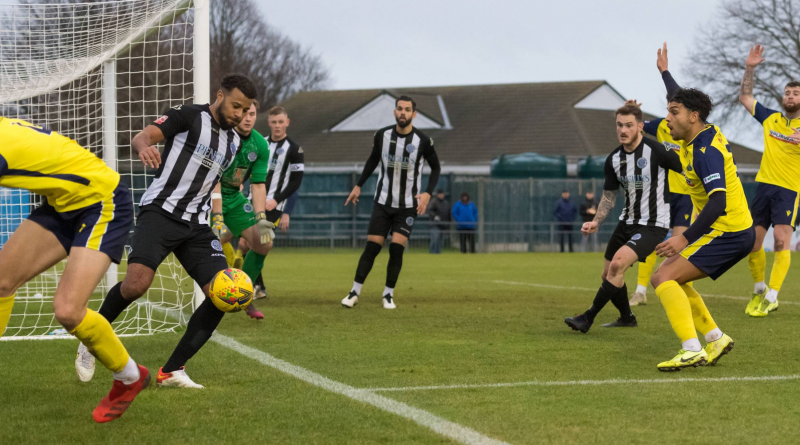 GOSPORT BOROUGH FC were denied a valuable win against Dorset-based Dorchester Town on Saturday afternoon, conceding a frustrating and painful late equaliser in a one-all draw at Privett Park. Played in front of 500 spectators and drizzly conditions Matt Paterson scored a controversial first half penalty that looked to seal a narrow victory to complete a Dorchester league double, but the Magpies got their well-deserved point through Thiago Caze Da Silva to deny another home win.

In truth it was a disappointing start to proceedings as both sides cancelled each other out in the opening twenty minutes; lacking the final ball in crucial areas following good build-up play. Although Dorchester’s Oakley Hanger saw his low cross cleared away by then defence, it was Dan Wooden who saw the opening effort in the tenth minute. A long ball found the striker in space at an angle, but his rising effort went over the crossbar with the home fans preparing to celebrate an opener.

Thankfully the game opened up on twenty-two minutes with Dorchester seeing a first shot on target for either side, Tom Purrington finding Alfie Stanley who saw his low powerful effort saved by home keeper Albert White for a corner. From this resulting set-piece delivery Gosport counter-attacked and fine passing ended in Wooden turning his marker, but also firing wide with his shot from a tight angle; whilst Charlie Gunson saw an effort drift wide for the visitors just after the 30 minute mark.

After another quiet spell in proceedings that saw Matthew Briggs booked and Purrington have some treatment for a minor head injury, Gosport took the lead on 42 minutes. Harvey Rew’s deep free kick looked to be headed wide by a home attacker, only to flick off the arm of Thomas Soares for an unlucky and controversial penalty. Despite a slight delay due to away protests, up stepped Matt Paterson to slot into the bottom right corner past away goalkeeper Gerard Benfield before half time.

Gosport seemed to attack upon the restart with Theo Lewis heading over a corner and firing straight at Benfield in quick succession.  Similarly to the first half the hosts were dominating the ball in the early stages but weren’t able to turn this into clear-cut chances although Joshua Huggins fired over from range, whilst Purrington shot straight at White from range following a counter attack on 63 minutes. This led into a lull in proceedings due to substitutions; both sides freshening up tiring legs.

Gosport saw the next opportunity on seventy minutes when Elliott Wheeler fired inches wide after a pass fell kindly into his path, whilst substitute Rory Williams had a low shot saved easily by Benfield in the away goal. With fifteen minutes left another home attack resulted in a rising shot by the ever-dangerous Wooden being well saved by the goalkeeper before linking up with Mason Walsh down the right. However the young winger’s effort was deflected wide via a block off the legs of Tiago Sa.

From this final Gosport chance on 81 minutes, it was the visitors who dominated the final moments in drizzly rain after an injury stoppage to Keiran Roberts. Albert White was forced into action to deny both Hanger and Ashley Wells in quickfire chances, but saved his best save for last in the 87th minute as he acrobatically tipped a powerful drive over the crossbar. However the home side were denied a vital win just seconds later, Thiago Caze Da Silva heading home Christos Papakonstantinou’s delivery; the winger further firing wide with the last chance of the game in stoppage time to end the stalemate.

Although Shaun Gale’s men are now unbeaten in three league games since losing at home to Swindon Supermarine two weeks ago, they have fallen to fifth place in the Southern League after other results this afternoon. Gosport will hope they can convert draws into wins on an upcoming week of travelling, trips to Hendon and Wimborne Town their next two games before Christmas. A final league match of 2021 versus Hartley Wintney at Privett Park awaits Borough on December 27 before a busy opening month of 2022.

PICTURED BY COLIN FARMERY: Borough players successfully appeal for penalty which was converted by Matt Paterson 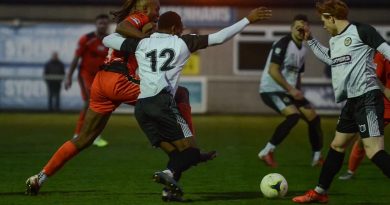