MET POLICE FC were victorious in a hard-fought victory at Privett Park on Saturday afternoon, beating Gosport Borough 2-1 in this Southern League encounter that promised so much.

But the hosts had been extremely disappointing and were ultimately punished for poor defending in the first half, leaving them with too much to overcome despite a red card for the visitors with 25 minutes left to play on a glorious afternoon for free-flowing football.

Gosport started well in sunny conditions as they brilliantly dominated possession in midfield, which allowed them to create the opening chance after 11 minutes. The ball was played into the feet of Bradley Tarbuck, whose low effort was deflected inches wide for a corner. But it wasn’t all one way traffic as Met Police then worked themselves into the game through a series of half chances from 12 minutes. Firstly striker Jack Mazzone shot straight into the hands of Boro’ keeper Albert White while Luke Robertson and Ruby Allen had efforts blocked by a solid looking defence led by Matt Briggs.

But on 15 minutes the Gosport defence was breached as Lewis Birch picked up possession in midfield and played a great through-ball forward down the left. Liam Ferdinand latched onto the pass and advanced into space before slotting past a stranded White into the corner before the visitors doubled their advantage moments later. The hosts were guilty of lacking concentration as a cross was deflected into the path of William Wickham, who curled an effort into the top left corner from 25 yards via a slight nick off a home defender to give the Met Police a sudden 2-0 lead.

Gosport were stunned but quickly got a foothold when Dan Wooden was fouled down the right and the hosts were awarded a free-kick opportunity from approximately 25 yards out. Theo Widdrington’s delivery was perfect and reached the unmarked Luke Hallett, who headed into the bottom corner from six yards to reduce the arrears. But sadly the remainder of the first half was very quiet with little goalmouth action for either side, although away defender Oliver Robinson’s header was chalked off for offside on 43 minutes after two injury stoppages for the Met Police.

The visitors started on the front foot in the second half with Mazzone and Ferdinand looking dangerous, the Gosport defence scrambling to clear the ball and avoid a potentially killer third Met Police goal. But as the clock ticked towards the hour mark, Borough looked to regain control as Wooden’s looping header drifted wide of the post following great work by Rory Williams down the left wing. Moments later Hallett came close to doubling his tally as he drilled an angled shot towards goal, but his net-bound effort was deflected narrowly wide off the legs of Bernard Tanner in defence.

Substitutions for both sides slightly halted the momentum but the 800-strong crowd were soon brought back to life as Robertson saw red for his involvement in a mass melee involving ugly clashes following a late foul on 66 minutes. The Met Police midfielder got his marching orders by referee Nicolas Metcalfe for wrestling Widdrington to the ground – a decision applauded by the fans in the main stand with a perfect view of the incident and one that seemed to spark life into the visitors.

They defended resolutely against waves of Gosport attacks down both wings, with the home side struggling to break down 10 men behind the ball. In truth though their final ball or cross into the penalty area was often poor despite Joe Lea’s effort over the bar, allowing the Met Police to intercept or close any open space in the penalty area. In fact it was the visitors who came closest to scoring a fourth goal as Zackary Chislett curled an effort wide before Salhin Abubakar drilled wide with the final opportunity in stoppage time; the referee ending proceedings shortly after a Gosport corner had been cleared.

With this defeat Borough missed the opportunity to move top of the Southern League table, instead remaining second following Hayes & Yeading’s late victory against Dorchester Town this afternoon. Shaun Gale’s men will hope to bounce back with a win against third-place Farnborough away on Tuesday night, before a enforced 11-day break following recent postponements due to fixture clashes with cup competitions. Gosport will then return with an away trip to Truro City, whilst their next home clash is not scheduled to take place until November 6 as Beaconsfield Town FC travel to Privett Park. But this is dependent on the FA Trophy Draw planned for Monday afternoon, with staff and fans hoping for a home clash on October 30 in a Hallowe’en weekend classic. 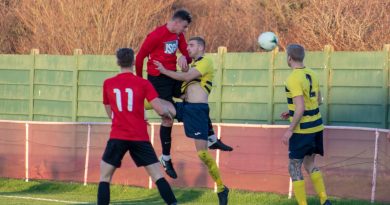