WITH HAMPSHIRE Cricket in the quarter finals of the Twenty-20 blast and facing Division One group of County Championship when it returns in late August alongside many stars in the new Hundred competition, it is safe to say that a great season could be upon the Ageas Bowl.

But expectant fans believe that Hampshire can progress in the Royal London One Day Cup and compete on all four strands of domestic cricket, which sadly looked like a lost cause as crowds entered the Ageas Bowl on Wednesday morning for their fourth group game.

Defeats against Essex and Lancashire alongside an abandoned home clash versus Middlesex meant that Hampshire were sitting in the bottom three of their group after four games; needing to beat a high flying Worcestershire to maintain hopes of progressing to the next round when this stage finishes later this month.

And with over 3,000 supporters in attendance on an overcast day, the Hawks rose to the occasion in a fairly one-sided victory of six wickets, partly down to the star man Kyle Abbott.

After the visitors won the toss and decided to bat first, it was the fast bowler who got things started for Hampshire with the wicket of Jack Haynes in the second over with the score 15-1. Two more overs fell for twenty runs as Worcestershire made a quick start to their powerplay, but were thwarted by the wicket of Tom Fell after four and a half overs to leave the scoreboard 36-2; the higher order batsmen bowled by Ian Holland’s Yorker that splattered the stumps.

After this bright start for the home side, Worcestershire were able to settle down with a partnership of 39 runs before Jake Libby was dismissed for just 12 runs (Given LBW off the bowling of James Fuller). It was soon 81-4 as dangerman Brett D’Oliveira was bowled by Ian Holland just before the drinks break, although more resistance from Worcestershire took them to 119-4 as their innings reached the half way point of 25 overs.

Despite the stabilisation of the visiting side, they did look prone to some accurate probing and intent of the Hampshire bowling attack led by Abbott as Worcestershire lost four quick wickets in a huge collapse; the bowler dismissing all of wicketkeeper Gareth Roderick, Ed Barnard, Joshua Dell and Josh Baker.

This carnage over the course of 3.4 overs confirmed a five-for by the bowler as he completed his best ever List A match figures with five wickets, conceding 43 runs in his 10 overs allocation.

Worcestershire were eventually bowled out for 176 off 39 overs in a below par batting display on a good surface, with John Turner backing up the 5-43 of Abbott with 3-44 off his 10 overs.

For the away side captain Jake Leach scored 34 unbeaten runs off 36 balls, but ultimately ran out of his fellow batting partners as Hampshire were set a target of 177 off 50 overs; a run rate of just over 3 ½ an over with time on their side.

The Hawks made a solid start with a 43-run partnership between Tom Alsop and Tom Prest, with the latter bowled off Adam Finch for 12 after 11.4 overs. Considering this was a pitch in which wickets could suddenly accumulate and probing bowling from Worcestershire, it was credit to the batting pair of Tom Alsop and Nick Gubbins who built up a 50-plus-run partnership to take them over the 100 mark off 24 overs.

But just before half way of the innings, Alsop was caught off the bowling of Brett D’Oliveira moments after he reached his half-century off 85 balls with six boundaries. At this point the score was 111-2, with the ‘nelson’ cricket curse striking for the visiting side.

Nick Gubbins then combined with Joe Weatherly, taking the sting out of a Worcestershire unit high from a big wicket and two maidens on the bounce. The middle-order partnership chipped off two thirds of the runs required as Gubbins reached his own half century before being dismissed for 59 to become D’Oliveira’s second victim. Weatherly continued to guide Hampshire to the target, but he did fall short with just three required as he was stumped by wicketkeeper Gareth Roderick to leave the score stranded on 174-4.

But the wait for victory was ended on the very next ball, with new batsman/wicketkeeper Lewis McManus smacking a full delivery for six runs to guide the home side home with 61 balls left to play.

The two points, coupled with a defeat against Gloucestershire on Friday (06/08), does leave the Hampshire One Day progress on a knife edge as they sit sixth in the first group with five points.

To finish fourth and qualify for the quarter finals, they will need to beat Kent on Sunday (08/08) and Durham four days later; both of these matches are away due to the Ageas Bowl being used for the remaining three games of Southern Brave’s Hundred campaign. 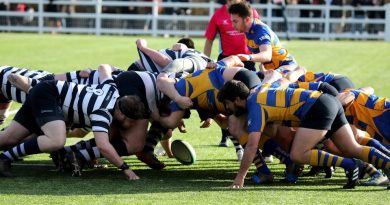