AFC PORTCHESTER were forced to settle for another home point on Friday evening as they were frustrated by local Portsmouth rivals Moneyfields at the On-Site Group Stadium, drawing one apiece after a feisty but engrossing league derby. But the two goals don’t tell the full story with two sinbins, a controversially given penalty and a late red card in the ninety minutes, which were played in front of over four hundred spectators enjoying the spring evening.

The hosts started the better on a dry surface and created the first chance after five minutes with ex-Moneyfields player Marley Ridge shooting at away keeper Callum McGeorge; who got a good low hand to the effort and diverted away to safety. In response the visitors saw their maiden opening on 11 minutes following a spell of Portchester possession, a threaded ball by midfielder Tom Cain reaching Dec Seidon who fired over the bar from a tight angle.

After this opening spell of chances the game seemed to settle into a cagey midfield battle that nether side wanted to lose; the next notable chance coming on 28 minutes when good football found ex-Portchester winger Joe Briggs, whose curling effort was denied by former teammate and home goalkeeper Steve Mowthorpe. And two minutes later saw a moment of controversy as the hosts won a penalty for an infringement that only the referee had seen.

Strong Moneyfields protests saw a sinbin card shown to defender Corey Heath, whilst Lee Wort was unaffected by the confusion and delay as he calmly converted the spot kick into the corner; becoming the league’s top scorer with 37 goals this campaign. In response the visitors went close to equalising twice through Steve Hutchings as he headed wide a free-kick and shot straight at Mowthorpe; Moneyfields dominating but unable to level before half time.

Portchester came out attacking in the second period and saw Wort almost double his tally as he stole the ball off a defender, seeing his shot blocked at source; whilst Tyler Gidding’s low side-footed effort was saved well by McGeorge at the second time on 53 minutes. And these missed opportunities were punished by Moneyfields moments later as the ball found Josh Hazell on the overlap; the wing-back rifling home across Mowthorpe into the bottom right corner.

In the aftermath of the equaliser away captain Steve Hutchings became the second player to be sin-binned for dissent; with Portchester seeing chances from Wort and Felipe Barcelos saved by the away keeper either side of the hour mark. Down the other end Moneyfields saw Seidon fire over the bar from range and Briggs shoot into the gloves of Mowthorpe as substitutions for both sides signalled a slight lull in proceedings with just twenty minutes left on the clock.

Portchester saw the best chance for a winner on 76 minutes as Barcelos floated a cross into the path of Wort, who hit a low shot against the post; whilst Moneyfields saw Hutchings’ fire over a half-volley just moments later. But any attacking momentum was halted by a straight red card for substitute Bradley Lethbridge after a late foul twelve minutes after coming off; leading to a niggly and fractious spell of additional time with both sides settling for a hard-fought point apiece.

When the dust settles it was a fair result over the ninety minutes and was a typical Wessex League derby; the result not really helping either side in their race for the top seven in the table. Moneyfields stay ninth after 34 games and will play Hamble Club on Tuesday evening having failed to close the gap on Portchester, who themselves rose to seventh although Baffins Milton Rovers will play this afternoon (Saturday). The Royals will now turn to cup competition action against Fareham on Tuesday night, facing the Creeksiders in their quest to reach the Wessex League Cup final.

PICTURED BY DANIEL HASWELL: Lee Wort takes the penalty kick in the first half to open the scoring; one moment of contention in a feisty derby between Portchester and Moneyfields on Friday night. 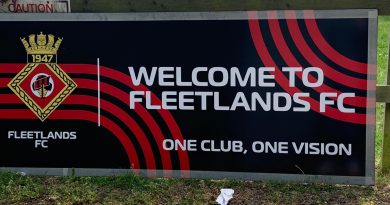 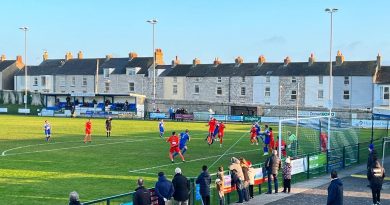