PORTCHESTER bounced back into winning ways on Tuesday night as they travelled to Southampton, beating bottom of the league Hythe & Dibden 2-0.

Goals from George Barker and Jake Raine sealed a much-needed victory for the Royals who may have wanted more goals but will be happy to simply get the points coming against their well drilled and hard-working hosts at the Garage Stadium.

In dry, breezy conditions Hythe & Dibden started well in possession and saw Liam Golding go close with an effort after 80 seconds, but the hosts went even closer in the sixth minute. A long ball played diagonally found Zac Willis in space with the winger driving forward to shoot, with his powerful angled shot deflected out for a corner. However the ball was cleared away from the clean sheet, which allowed the Royals to regroup and work themselves into the game with a length spell of possession.

Portchester’s first chance came following a succession of corners in the 15th minute, with the ball recycled and played out to Steve Ramsey lurking just outside the penalty area. He advanced inside the area but hit a bobble as he prepared to shoot, meaning that Hythe keeper Conor Manderson was able to smother the loose ball adverting any further danger. Marley Ridge then fired over the crossbar on 21 minutes before an even greater chance for the Royals, fine one-two passing set Lee Wort through on goal but the striker fired wide as his dangerous effort flashed over the woodwork.

Such was the pressure on Portchester to win due to the low standing of their opponents, the visitors were becoming frustrated and wound up towards the officials that was eventually punished. After a foul was given against him, George Colson was sin-binned for 10 minutes on the half-hour mark. And Curt DaCosta saw yellow for a foul in which he injured himself. The central defender was quickly replaced by Zak Sharp after being deemed unfit to play by the away medical staff / physios.

These injuries and discussions with the referee helped break up proceedings for Hythe who were looking to reach half time unscathed. But after a shot from Owen Roundell was held by their goalkeeper Manderson, the hosts created their best opportunity after 43 minutes with home fans already celebrating prematurely. Midfielder George Ashby’s wonderful out-swinging cross was floated to the back post and was met by striker Ethan Cheshire, who under pressure misjudged the header as he sent it over from five yards out. This was an opportunity that the hosts were rueing as Portchester took a lead on 45 minutes as stoppage time began.

The ball was worked into the feet of Barker down the middle who made his effort look simple from 25 yards, his curling and sublime shot hitting the net to spark huge celebrations for the away side; who had finally broken through an organised defence and changed away manager Dave Carter’s team talk for the better. It wasn’t the perfect end to the first half though as Ridge picked up an Injury and had to be replaced by Lamin Jatta before the referee blew for the break.

It was a slow start to the second period as both teams looked to implement their managers’ half time instructions, but ultimately cancelled each other out in a midfield battle that neither wanted to lose. However Portchester created a chance on 58 minutes and it was a sitter for Wort, who headed George Colson’s brilliant cross too close to the keeper making an equally amazing save. But despite the quality of the save, many would have expected the net to ripple again for the visitors and felt the striker could have done better with that opportunity.

Although there were chances for Barker, Ramsey, and Jatta just after the hour mark, play was broken up by home substitutions in order to freshen up the legs in their midfield. But still Portchester were on top and should have been given a penalty on 71 minutes when Wort ran into the box, but looked to be tripped by Tyler Braddock as he attempted the angled shot. Luckily for Hythe, the referee turned down the appeals from the visiting contingent including the bench and let play continue.

This seemed to give the home side confidence and they came out pressing high up the pitch with 15 minutes left, which nearly got Hythe an equaliser out of nowhere on 79 minutes. Under pressure Portchester’s Zak Sharp played a wayward back pass to his keeper but was then involved in a foot-race to the loose ball with home striker Filippos Terzids; somehow the defender got there first against the pacey attacker and safely cleared the ball to safety for a throw-in, which came of much relief to all involved with the Royals.

After some great play down the left saw a shot deflected out for a Portchester corner, the visitors doubled their lead on 84 minutes to kill this contest off. It was Jatta who made the goal as he got the ball and ran down the wing beating his marker for pace, before cutting the ball back into space. This split the home defence and found Jake Raine who made no mistake in placing a calm shot just inside the bottom post. Wort then nearly made it 3-0 in the final moments after winning the ball, but his shot was brilliantly saved by Manderson at his near post as the referee blew for full time shortly afterwards to confirm a job well done by the Royals in Southampton.

Following the victory Portchester have risen to 12th in the Wessex League Premier with just eight games played, Dave Carter’s side having matches in hand on other sides around them. They will now travel to Dorset on Saturday afternoon for a tough clash versus Hamworthy United before they host Alresford Town on October 16. Cup games versus Infinity and Fareham Town then follow before the end of October, while Hythe will host US Portsmouth on Saturday afternoon hoping to end their pointless start to the new campaign after promotion. 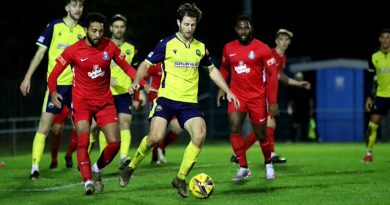