PORTCHESTER continued their recovery following last week’s 3-0 defeat to Hamworthy United, beating rivals Alresford Town by a two-one margin at the On-Site Group Stadium on Saturday afternoon. In warm autumnal weather Lee Wort scored a goal in both halves to seal a win following their huge victory over Hamble Club in midweek, but the score-line was made closer with the final kick of the game to end hopes of a welcomed league clean sheet.

Although Liam Campbell looked dangerous down the left wing and saw the first shot on goal with a rising effort, Portchester were in arguable control during the first twenty minutes in terms of chances and possession. Home captain Steve Ramsey fired inches wide of the post with a low driven effort from range on eleven minutes, whilst George Colson’s cross from the right was headed over the bar by Ryan Pennery under pressure from Sam Steel in the away defence. George Barker also fired over an angled effort when well placed on 18 minutes as Portchester looked to assert their dominance.

Instead after weathering the early pressure Alresford slowly worked their way back into the game and created a great chance after 26 minutes. James Parker-Trott was fouled around 25 yards out with the free-kick taken by Marcio Neves, whose curling effort came off the crossbar and was then quickly cleared for a corner. Just past the half hour mark great play down the right saw the Portchester defence split into two, but Iiyas Warshow’s finessed shot was brilliantly saved by keeper Steven Mowthorpe who tipped the ball round the post.

With the scores goal-less and an even first half coming to an end, a piece of sublime finishing broke the deadlock on 40 minutes. It was Portchester who took the lead as the ball was worked into the path of Lee Wort who let the ball run forward, with the striker hitting a first-time shot across the keeper Callum Smart into the bottom corner. This goal was met by cheers from the home side, who knew the timing of that finish was key as the sides went into the break shortly afterwards; with the away manager’s team-talk now dramatically changed by that Wort stunner just moments earlier.

Manager Dave Carter made one change at the break following a tough week of illnesses within his squad as Jake Raine was forced off as he struggled to keep up with the play. But Portchester’s play was not affected by this enforced substitute as George Barker hit the side-netting on 52 minutes whilst Sam Pearce headed wide from a corner just moments later. Down the other end Andry Demira shot harmlessly over the crossbar whilst Warshow had a low drive blocked at source by a defender’s legs as Portchester absorbed a mini-spell of away dominance around the hour mark, which seemed to spark the hosts into life knowing that one goal would not be enough to win the game.

Substitutions for both sides including home leader Ramsey caused a slight period of relative calm, but soon sprung into life on 66 minutes when Portchester doubled their lead with a fantastic second goal by Lee Wort. An incisive pass split the defence into two and fell to the striker who saw Alresford keeper Scott off his line, cheekily lobbing a shot over the advancing shotstopper and into the far bottom corner with a brilliantly composed finish. Just moments later it was nearly three-nil to the hosts as Owen Roundell broke forward in midfield and shot wide from twenty-five yards, before Adam Tomasso’s drive from inside the box was ultimately straight at the Alresford keeper from 10 yards in the 72nd minute.

With a two goal advantage the hosts looked to protect their hard-fought gains, dropping deep and absorbing pressure from Alresford who wanted to cause a final nervous spell with a goal. This was a mission that was nearly achieved on 87 minutes when Sutcha Shepard’s ball across the box found an outstretching foot of Liam Campbell, but luckily for Portchester this certain goal was denied by Steven Mowthorpe diving to his right hand side to tip it wide of the post. However the scoreline was reduced with practically the last kick of the game as a shot was blocked by a defender, with the referee deeming a handball in the 95th minute of play. The away striker stepped up and fired home his effort with a great penalty but ultimately this goal didn’t cause any problems as the referee blew his final whistle as soon as play restarted.

Portchester staff and fans were understandably delighted to gain their first home league win of the season, which they will hope to build upon on Tuesday night versus Infinity in the Russell Coates Cup. It will be a game that will feature many youngsters and U23 players with youth managers in charge of the local encounter; several first team players are rested due to playing Horndean in the Wessex League Premier away on Saturday afternoon in a great Portsmouth derby. 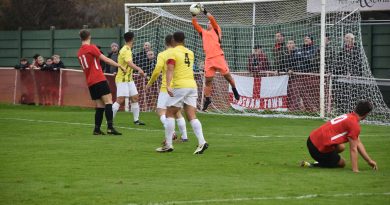