FOLLOWING their stalemate with AFC Stoneham last weekend, Portchester returned to winning ways on Tuesday night as they beat New Milton Town at home to progress into the next Hampshire Senior Cup; stretching their unbeaten run in all competitions to six games before some important upcoming ties.

But in fairness this winning margin does flatter the Royals, who were made to work hard by a brilliant away performance by the Linnets despite being one league below their opponents.

Portchester started brilliantly with a strong starting 11, taking the lead after just three minutes with their first foray forward. George Barker won the ball in midfield and played a great pass into the feet of Keiron Roberts breaking the offside trap. The striker made absolutely no mistake in slotting past the dive of New Milton goalkeeper Ollie Ball at his far post; notching another goal to make it 15 in all competitions already this season.

Despite the early goal proceedings quickly turned into an early battle of wills, with nobody wanting to make a mistake and the game was being played in the midfield. With this in mind however the hosts were dominating possession as they displayed good patience, which saw chances fall to both right back Tyler Giddings and Marley Ridge in the opening 20 minutes; hoping to take advantage of a side from the league below.

But unlike similar cup ties for Portchester, the Linnets seemed to gain confidence going forward as they had a spell of possession that led to their equaliser after 23 minutes of play. Away striker Tyrrell Sampson found space and jinxed through the home defence before rounding Royals’ stopper Steven Mowthorpe; tapping into the empty net despite the best efforts of Brett Poate tracking back. Chris Long also went close on 27 minutes, before Tyler Rudd suffered an injury and had to be replaced by George Deem after a collision.

The last 15 minutes of the first half matched the same intensity and this led to chances for both sides. New Milton won a free kick just outside a crowded penalty area with Matt Gane’s effort just whistling past the far post, whilst defender Elliott Lines headed wide following a series of corners as the visitors seemed to dominate. Down the other end, Portchester played a quick free down the right to find Lamin Jatta, but the striker’s low angled effort went wide. The referee blew his whistly for the interval shortly afterwards, bringing an end to a watchable period in which both teams showed various qualities and one in which any result was possible.

A quiet opening to the second period was ended in the 51st minute as a collision between home captain Curt DaCosta and New Milton’s George Deem. But unfortunately it was the away player who came off worse, seemingly suffering an injury that saw him stretchered off the pitch for Harry Morgan. Portchester also made their own tactical change as Finley Bello replaced Poate to offer more pace in the centre back position as they attempted to stop the fast attacking talents of New Milton.  George Richardson then fired over the crossbar on 59 minutes as he was fed by Jack Dacombe down the right, before Portchester asserted control just after the hour mark.

Barker went close in the 62nd minute as he picked the ball up twenty-five yards out and drove forward to beat three defenders, but couldn’t apply the finishing touch to a potentially specular solo effort. Moments later the attacker linked with McCreadie to win a corner, which led to their second goal of the evening on 66 minutes. After the ball was recycled following a clearance, brilliant wide play saw a driven cross into the box; finding DaCosta who made no mistake in converting home.

It should have been 3-1 to Portchester on 73 minutes as New Milton were caught out trying to play out of defence. The pressing Jatta stole the ball from the last defender and saw his effort well saved by away keeper Ball, with the rebound falling kindly to the advancing Roberts eight yards out. But with the goal gaping and fans beginning to celebrate, the striker somehow fired over the bar from close range with his powerfully hit effort.

Buoyed by this reprieve the visitors had two big chances to equalise in the final 10 minutes as fresh legs seemed to change proceedings. A clearence into the Portchester box caused chaos with the pinballed attempt to remove the danger fell to away captain Aaron Scott to fire wide from his half volleyed effort. Moments later a free kick was wasted by the Linnets as it was cleared away by an organised home defence, with the clock quickly ticking down as they pushed men forward to force a penalty shootout if they could score another equaliser.

Instead a fourth goal fell Portchester’s way as they took advantage of extra space in the fifth minute of extra time. Fine play down the left saw a cross into the corridor of uncertainty which was tapped home into the corner by young striker and substitute Archie Greenough for his first Royals goal in front of the home crowd. This was the final notable action before the referee ended proceedings, with another win for Portsmouth and progress to the next round of the Hampshire Senior Cup. Their opponents and dates for this match are still to be decided until all games have been played at this early stage.

But attentions must now turn to the FA Vase on Saturday afternoon, which will see Portchester in a local derby with Moneyfields away in Portsmouth. This promises to not only be a clash of two favourites from the Wessex League Premier divisons, but will act as a return to ex-clubs for the away manager Dave Carters and many other Royals over recent years. Next Tuesday Portchester host Horndean in another local derby at the On-Site Group Stadium, playing the Deans in a top of the league clash for the Wessex Premier. 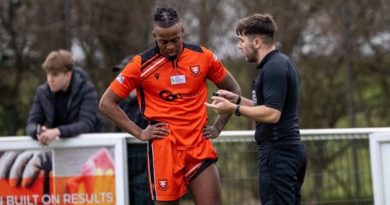