GOSPORT BOROUGH started the New Year in dominant style as they returned to winning league form on Saturday afternoon, thrashing their local rivals Salisbury five-nil at an overcast and drizzly Ray Mac Stadium. Goals from Harry Kavanagh, Matt Paterson, AJ Harris-Sealy, and a double salvo by Dan Wooden sealed this fantastic display from Borough, who avenged their heated FA Trophy defeat to the same side back in late October.

Although Calvin Brooks saw a shot blocked for Salisbury, visiting Gosport were the better side in the early stages and created their first opening in the sixth minute; Kavanagh cross finding Billie Busari and the youngster seeing his shot blocked before Mason Walsh fired over the bar. But they weren’t rueing missed chances as they did take the lead after Rory Williams’ free kick was turned home by a Wooden touch on the tenth minute.

The game settled down after this lighting start with Salisbury dominating possession as Sam Ashton and Harry Baker went close, but Gosport did nearly make it two-nil on 22 minutes. A cross found the head of Wooden whose nodded effort was saved brilliantly by ex-Borough keeper Patrick O’Flaherty and the ball was cleared off the line by a defender. Moments later Walsh and Busari linked up to see the latter’s goal-bound shot blocked.

Gosport took a two-nil lead after 33 minutes through Kavanagh after a shot was deflected to the feet of Wooden who couldn’t collect the ball; the pinball fell to the lurking right-back who drove a shot in the corner. And after Salisbury saw their first shot on target through Antonio Diaz, the visitors should have made it 3-0 as Wooden headed wide and Rew was unlucky not to convert the loose ball from an angle; the referee blowing for half time shortly afterwards.

The visitors did make it three-nil on 49 minutes after some brilliant build-up play resulted in Walsh taking advantage of a Salisbury injury as he raced forward, but instead of shooting he set up striker Wooden to slot home an easy finish.  In response to falling further behind Salisbury saw efforts by Ashton and Diaz that weren’t able to test away keeper Albert White before substitutes slowed the play either side of the hour mark.

But Gosport weren’t fazed and saw Busari had two good chances to add a fourth goal, seeing a shot saved by a diving O’Flaherty before the home shot-stopper denied another effort from the attacker as he ran through in the 65th minute. From the resulting corner Matt Briggs was able to hold up the ball and turned his markers in the box before firing over the crossbar via a slight deflection, with a shot by Mike Carter cleared away to safety.

Salisbury thought they had pulled a goal back on 73 minutes before the offside flag was raised and things were worsened as Chikanele Elechi was shown red for two yellow cards, an advantage that a storming Gosport ramped home with a fourth goal on 80 minutes. The ball was worked to midfielder Elliott Wheeler, whose effort was deflected home by new signing Harris Sealy; a score line that was made a perfect five-nil on 88 minutes as Paterson fired into the net from Busari’s low cross.

Gosport will be hoping this fantastic result and performance can kickstart their faltering league run in late 2021, with the three points maintaining their fifth place position in the Southern Premier standings after 24 games. Shaun Gale’s side will now hope to build a good streak of wins during a busy January, next playing Walton Casuals at home next Saturday before travelling to Poole Town away just seven days later. 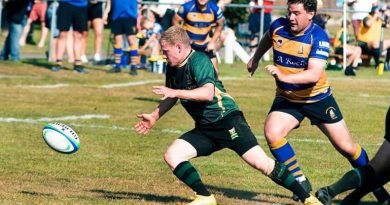 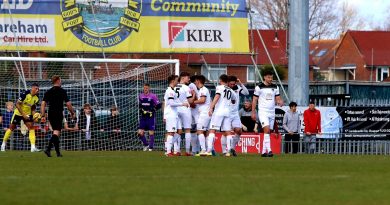