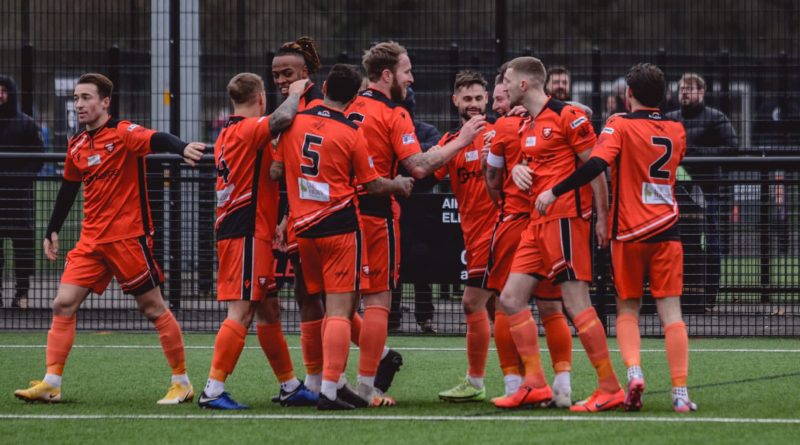 AFC PORTCHESTER gained a credible away point as they drew two-all with AFC Stoneham in a great league encounter in Eastleigh, despite being reduced to 10 men just before half time. This latest result stretches their unbeaten run to ten games since late November, with Dave Carter’s side being rewarded for hard-work, graft and desire in this fantastic result against higher placed inform opposition.

The Royals made a positive start on the artificial surface and should have been ahead with their first chance after four minutes; Barker’s rising effort goal-wards seemingly blocked by a hand in the area, the officials turning down loud appeals from the visitors. Down the other end Stoneham’s Scott Hills saw his effort brilliantly blocked off the line by Curt Da Costa before being cleared away to safety.

And after Marley Ridge had gone close following a tackle, Portchester took the lead on ten minutes as the youngster converted a wonderful cross from the left with a fine header leaving home keeper Tom Parker-Trott stranded. The visitors nearly doubled this advantage on 18 minutes when Ridge’s inviting cross narrowly missed the feet of both Lee Wort and Rafa Ramos advancing into the area.

Stoneham slowly worked their way into the game after falling behind as Nathan Clement’s delivery was met by Ryan Penny in the area, forcing away keeper Steven Mowthorpe into a solid save down low. In the 25th minute another chance fell the way of Hills who sent a snapshot harmlessly wide of the post, whilst Portchester were dealt a blow as captain Steve Ramsey was forced off due to injury.

The visitors saw two chances after the half hour mark as Ramos fired wide from Tyler Giddings’ rising cross whilst Wort’s diving header flicked the side netting from another cross. In response striker Ollie Dennett saw a shot saved by Mowthorpe before a potential game changing moment as Giddings was sent off for his reaction to a foul, leading to high tension scuffles as the referee blew for the interval.

Stoneham made a change at half time as Callum Laycock came off the bench, making an immediate impact as he saw a shot saved by the away goalkeeper and defender on the rebound. But the striker wasn’t to be denied on the 54th minute as he equalised for the hosts, scoring a half volley past diving Mowthorpe after a cross into the area. Penny then went close to adding a 2nd but sadly shot over.

Ten-men Portchester then saw a chance to retake the lead as Wort’s shot was brilliantly saved by an acrobatic home goalkeeper, with Barker screwing home the rebound under pressure. This miss was then worsened by a second Stoneham goal after 69 minutes when a long ball found Hill through and the striker made absolutely no mistake in chipping the ball over Mowthorpe into the bottom corner.

Substitutions for both sides including a debut for Bradley Lethbridge signalled a slight change in pace but this didn’t last long as Portchester equalised after 79 minutes with their last notable action of an engrossing encounter. Incisive passing play around the penalty found Barker down the left and good footwork allowed the winger to calmly slot home a low effort into the corner past a diving keeper.

From this point forward Portchester seemed to settle for a point as the hosts looked likelier to score the fifth and decisive fifth goal; creating two late chances to seal the victory. The first came when an angled pass found the advancing Laycock whose shot was blocked at source, whilst Penny went close with a stoppage time effort that was plucked out of the top corner by Mowthorpe’s fantastic save.

In the end both teams were forced to settle for a point, a result that means Portchester drop to 9th place in the Wessex Premier division after Moneyfields won on Saturday. The Royals will hope to get back to winning ways and continue their fine unbeaten run when they travel to Amesbury in a rearranged fixture from earlier this month on Tuesday night, before hosting Bashley next Saturday afternoon at the On-Site Group Stadium.