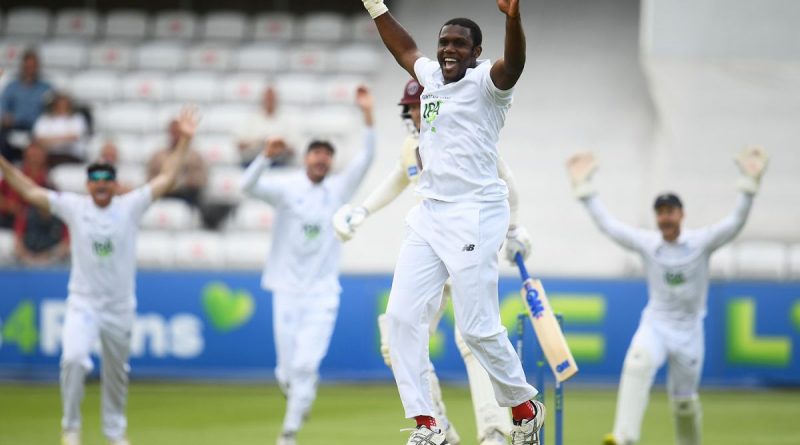 HAMPSHIRE CRICKET’S preparation for the 2022 summer campaign received another major boost earlier this week, all-rounder and red-ball bowler Keith Barker signing a new contract to stay at the Ageas Bowl for another two years until the end of 2023 as the Hawks seek title glories in future.

Formerly a footballing talent who played for Blackburn Rovers and Port Vale before starting his cricketing career; the left-arm fast bowler made his debut for Warwickshire in 2009 and helped the Bears win the 2010 one-day cup alongside the County Championship two years later.

After joining Hampshire at the end of 2018, Barker has become a key member of their four-day side over the last three campaigns; playing all but one game in his first season. The all rounder took 38 County Championship wickets at an excellent average of just 26.34 per dismissal, whilst also contribute 357 runs at a batting average of 25.50.

The 2020 campaign saw Barker only made two appearances due to a minor injury and a limited cricketing summer due to lockdown restrictions, but this didn’t stop the all-rounder from impressing. He took seven wickets at  28.71 alongside batting contributions of 28 not out versus Middlesex and twenty-five unbeaten against Sussex in the Bob Willis Trophy.

But 2021 was Barker’s real standout season for Hampshire despite his age, picking up forty one LV= Insurance County Championship wickets at an average of just 18.41 across both stages of the competition. His best bowling figures came against Nottinghamshire with a career best seven wickets for 46 runs at the Ageas Bowl, helping his side reach the later rounds with hopes of glory coming down to the final day.

The now 35 year old also proved crucial with the bat through the 2021 campaign, adding 379 runs in the lower order at an average of 27.07 per innings. He particularly impressed in a victory over Middlesex in May, scoring 84 runs in a seven wicket win at the Home of Cricket. But despite his efforts Hampshire were unable to seal the Championship title, losing in an one-wicket defeat away in Liverpool back in late September.

Barker was also rewarded for his fine displays in 2021 despite an injury affected start, being named Red Ball Bowler of the Year at the Hampshire End of Season Awards. The all-rounder was further selected by his peers for the prestigious Players’ Player of the Year award, with the Hawks hoping for similar performances when the 2022 summer of cricket begins in early April with fixtures still to be announced by the ECB.

Alongside his performances on the pitch Barker has further been working behind the scenes with the one-day squad, acting as a mentor and coach for the young side as they reached the latter stages before being trashed by Durham away at Chester-le-Street in mid August. It is unclear if the all-rounder has conducted a similar role with the Twenty-20 team, who reached Edgbaston’s finals days before losing to Somerset in a dramatic semi.

The star gave an interview on the Hampshire website in which he said: “It’s a great feeling. I felt I did pretty well last year and to be able to go again for another two years, I couldn’t ask for anymore really. I really want us to get that red ball trophy and push as hard as we can for that – we’re taking the right strides this winter and hopefully we can get over the line next year”.

Hampshire Director of Cricket Giles White was also delighted at the news, saying: “Keith has been one of the leading all-rounders in the longest form of the game for years. It’s not just the runs and the wickets that make him such a valuable member of our squad. He also plays an important role off the field and has become a well-respected leader within the group. We are obviously delighted that he will be playing a part in the club over the next couple of years.”

Bronze is colour for Gosport boxer