ALL the fun of a Victorian fair was the centrepiece of celebrations to mark the 150th anniversary of the construction of Fort Nelson on Portsdown Hill.

The funfair from the era in which the fort was built certainly drew the crowds, with hundreds of people enjoying traditional rides of a steam carousel, swing boats, a Ferris wheel, and a helter-skelter during the two days of festivities.

Victorian costumed characters gave performances and mingled with crowds, and the assault course which had proved popular with summer visitors, was reopened for the weekend.

Elizabeth Puddick, the fort’s Public Engagement Manager, said: “We had a fantastic weekend celebrating our 150th anniversary and stepping back in time with a Victorian fair seemed a fitting way to mark the event.”

Celebrations over, Fort Nelson now returns to its usual role of displaying the Royal Armouries’ national collection of artillery and historic cannon – more than 700 items from around the world and spanning 600 years of weaponry development.

It is open each week from Wednesday to Sunday, 10am to 5pm.

As it is a national museum, entry is free for both the displays and to wander around and admire the engineering and construction of one of what have become known as ‘Palmerston Follies’.

These are the forts built in the 1860s – when Lord Palmerston was Prime Minister – to protect Portsmouth and other naval bases from a feared French invasion that never came. In fact, the defences never saw action though some were used extensively during both world wars.

There is a charge for the car park, and people are being asked to pre-book their visit to guarantee entry because, in these Covid-times, numbers entering are limited. 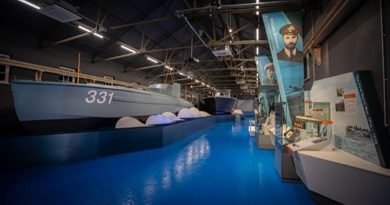 Walking in an Alverstoke wonderland