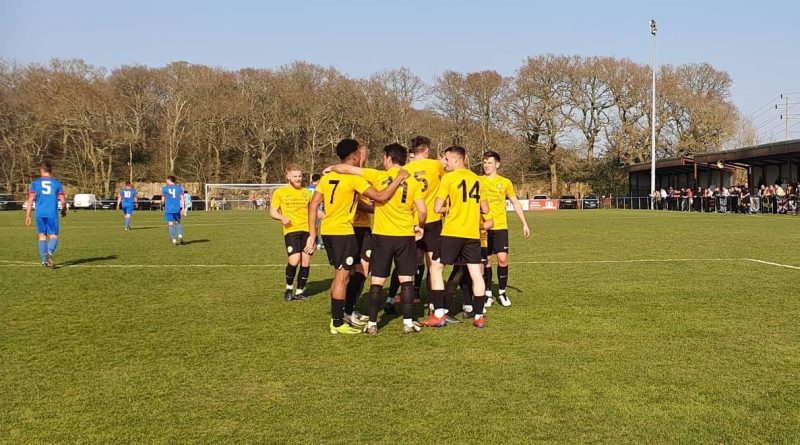 FAREHAM TOWN were unable to build on their historic cup semi-final victory over Portchester in midweek as they continued their poor league form against inform Bashley on Saturday afternoon, losing five-nil in beautiful conditions in the New Forest. It was a match that was decided in the first half with all five goals scored before a quiet second period as the Creeksiders improved, but simply weren’t good enough at the Glen Mex Stadium as they were punished for key defensive mistakes.

The Creeksiders actually started the better and created the first opportunity after four minutes as Charlie Cooper forced a low diving save from former teammate Ross Casey for a corner. This scare sparked Bashley into life and they themselves saw their first chance as Brad Morris fired over and ex-Gosport striker Matt Tubbs saw a penalty appeal turned down on nine minutes. But just moments later the hosts did take the lead as Tubbs collected a fine pass and calmly slotted past the away goalkeeper.

Straight from the kick-off Bashley doubled their lead as Archie Wilcox hesitated in the backline under pressure by Adam Grange, who won the ball and went on a mazy run before stroking home a low finish into the bottom corner to cap a fine solo effort on 16 minutes. This quickfire double paved the way for a quieter spell as a shell-shocked Fareham tried to reduce the onslaught and reached the half hour without much further incident; despite Lewis Aimson heading wide a fine cross from the right side.

Bashley did make it three-nil on 34 minutes with Tubbs scoring his second goal after an incisive team move, whilst Liam Farrugia fired over a powerful effort shortly afterwards. But the hosts continued to push and added a fourth as Tubbs sealed his hat-trick on 39 minutes with a fine shot on the turn, whilst it got worst for the visitors as they conceded a penalty after Tubbs was fouled in the box. Up stepped Grange who simply made no mistake from the spot in the final notable action before the interval.

Fareham started the second half with ten men following an earlier sin-bin to Dan Bennett but they did perform with more fluency than the first period and created their best chance to get a consolation goal through Josh Benfield whose shot flicked the outside of the post following a cutback from Casey Bartlett-Scott Down the left. In response hat-trick hero Tubbs went close to adding his fourth as he dragged a shot wide of the post from twenty-yards out before he was replaced by Bue Bennett just before the hour mark.

The Creeksiders continued to improve and saw two quick chances to reduce the arrears following a sequence of changes across both sides; Gary Austin firing wide from an tight angle and Curt Robbins forcing a fingertip stop from Casey in the home goal who diverted the ball to safety with attackers lurking for the rebound. But Bashley were looking dangerous when they went forward as Marcelo Rossi’s first touch was a shot that was well saved by Price in the Fareham goal, whilst Bennett headed over a fine cross with twenty minutes left on the clock.

The hosts nearly made it six-nil on 76 minutes after a spell of possession that ended in Ben Atiako-Hall winning a free kick twenty yards out, which deflected into the path of Lyle Simpson who scuffed his shot wide under pressure by Bennett, whilst Aimson went close moments later. But from this point attention turned to protecting their clean sheet, which Bashley managed with relative ease despite efforts from both Austin and Ben Rowthorn as the match reached its conclusion.

Following another big defeat Fareham have slipped to fourteenth in the Wessex League table after other results, scoring ninety and conceding 88 in thirty-six games this campaign; remaining winless since beating Blackfield & Langley in late January except for cup games. This is a record that manager Pete Stiles will hope to correct over the next seven days starting with a home derby encounter versus Moneyfields on Tuesday evening, before a long trip to Portland United next Saturday afternoon at the Weyline Stadium.

PICTURED BY SHAUN CANNON: Bashley players celebrate one of their first half goals as Fareham players trudge back to the centre circle during Wessex League encounter in the New Forest. 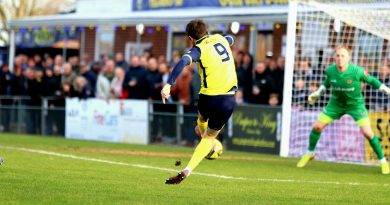