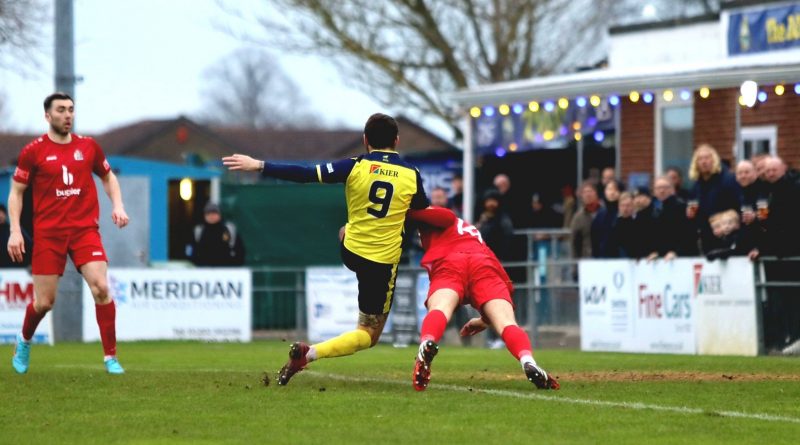 GOSPORT BOROUGH returned to winning ways with a comfortable victory versus Harrow Borough at Privett Park on Saturday afternoon, ending a run of two successive defeats against Poole and Hayes & Yeading United in the last week. Goals from Ryan Pennery and a quickfire second half double from Dan Wooden sealed the three points from a professional display in front of over 500 fans to lift Shaun Gale’s team following a mixed start to 2022.

In dry but chilly conditions Harrow started the better as George Moore saw his bouncing shot drift wide after ten minutes and Anthony O’Connor hit the post with an angled effort, but it was Gosport who took the lead on 14 minutes with their first foray forward. A cleverly worked corner was played into Bradley Tarbuck who hit the post with a first time shot, but Ryan Pennery was there to tap home the rebound effort from six yards despite the determined efforts of Shaun Preddie.

And after an offside goal from an angle Tarbuck should have made it two-nil on twenty-three minutes as he cut inside, seeing his low effort saved by Harrow keeper Joshua Strizovic at his near post; Mason Walsh firing over the bar moments afterwards with a curling effort. Down the other end Samuel Adenola was looking dangerous and his cross was narrowly missed by James Ewington before Dernell Wynter dragged wide just after the half-hour mark.

An earlier injury stoppage to Mike Carter had affected Gosport’s momentum, but the hosts seemed to regroup in the last ten minutes before half time when they created a flurry of chances starting as Pennery’s cross narrowly missed the advancing Dan Wooden at the back post. On 38 minutes Joshua Huggins headed over an inswinging delivery and Tarbuck fired over, whilst Moore’s shot was tipped around the post by home debutant keeper Fynn Talley in stoppage time.

Gosport started brilliantly after the interval as they doubled their lead within moments, Tarbuck collecting a pass and playing a delightful pass into the corridor of uncertainty to find Wooden who made no mistake in tapping home. It was three-nil on 51 minutes when Walsh’s floated cross was missed by the defender and goalkeeper to find Wooden unmarked, the striker sending his hooked volley inside the bottom left corner to send Privett Park into raptures.

Substitutions for Harrow signalled a slight lull in proceedings but Gosport won a penalty just after the hour mark as Tarbuck was fouled inside the box following a great turn, giving Wooden the best chance of a hat trick after 66 minutes. However the Harrow goalkeeper had over ideas as he dived the right way and pulled off a great save down low, denying a fourth goal for the hosts alongside a save from Pennery’s drive and a header that he tipped over the bar.

The final fifteen minutes were fairly quiet in comparison with play drifting to its inevitable conclusion as Nick Dembele returned to action off the bench following injury. But it was actually his brother and opposite number Balai Dembele who made the final impact as Harrow got their consolation goal in the 85th minute, the winger smashing home a volley following a cross that took a deflection. Despite a chance for O’Connor to spark a nervous ending, Gosport stood firm for a much deserved three points.

The three points lift Gosport into the top six, just outside the play-off positions, above Chesham United on goal difference although their rivals have matches in hand. However attention must turn to knockout competitions with the team scheduled to play US Portsmouth in the Portsmouth Senior Cup at home on Wednesday night, a mixed side expected to participate against Wessex League opponents. Tough away trips to Met Police and Hendon then await Gosport, before they host Farnborough on February 5 in a hugely exciting derby at Privett Park.

PICTURED BY TOM PHILLIPS: Dan Wooden hooks home a volley for his second of the afternoon, making it 3-0 to Gosport after fifty one minutes. 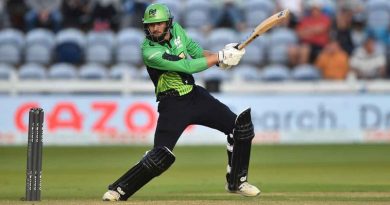 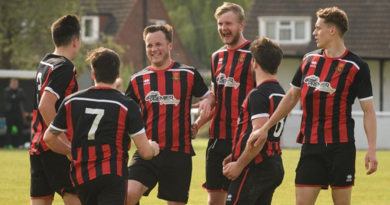