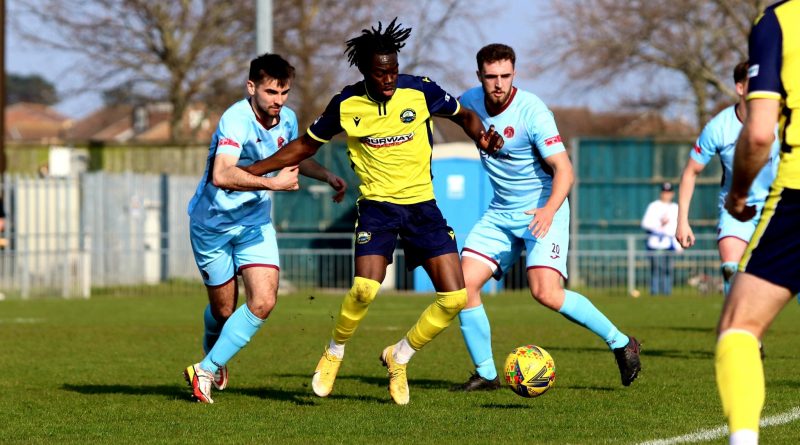 GOSPORT BOROUGH’S slim play-off ambitions look officially over following a late defeat versus high-flying Taunton Town, who scored their winner with just six minutes left to play to secure a one-nil victory. But despite the heartbreak Shaun Gale’s side should be given praise for their efforts and performance in delightful sunny conditions at Privett Park, creating many chances to score through the ninety minutes and matching quality opponents in front of nearly seven hundred supporters, only to be hit by a late and clinical counter attack to end a short unbeaten run.

Gosport started well and created the first opportunity after three minutes as Rory Williams shot over the crossbar from range, before a home penalty appeal was rejected by referee Alex James as Billie Busari appeared to be tripped in the area moments later. But undeterred the hosts kept attacking as Dan Wooden dragged wide on eight minutes and Taunton’s Ben Adelsbury was shown yellow sixty seconds later for a late foul; the resulting free kick reaching Luke Hallett at the back post who could only chest into the hands of away goalkeeper William Buse from close range.

Proceedings reached the quarter hour mark without further incident before a series of niggly fouls resulted in the first stoppage in play; the injured Joseph Budd being replaced by Ross Staley in the Taunton backline. Gosport almost took advantage of this interruption as Busari’s low angled effort was deflected for a corner on 21 minutes which was cleared away to safety; whilst Taunton had their first opportunity just before the half hour as Gethyn Hill was played through the defence, seeing his low goalward shot blocked superbly by the legs of Hallett for a corner.

Following another injury stoppage and yellow card for Ioan Richards, Taunton went even closer as they won another corner on thirty four minutes; Joesph Guest’s delivery causing chaos inside the area as Adelsbury hit the bar as further shots were blocked in a goalmouth scramble before being cleared away. Down the other end a set-piece from Williams was deflected wide for a corner and Bradley Tarbuck’s cross reaching Matt Brigs to head over on forty-four minutes; the entertaining first half ending goalless after additional time despite good attacking chances for both teams.

The hosts came out firing after the interval with Tarbuck’s low driven shot parried away by Buse on 47 minutes with the Taunton goalkeeper also recovering quickly to deny Wooden’s rebound from a tight angle. Shortly afterwards Gosport hit the crossbar themselves as Harry Kavanagh’s cross was headed against the woodwork with the rebound missing Harvey Rew by millimetres before a series of corners came to nothing; whilst Taunton had their own chance down the other end as the sliding Hill narrowly missed a deep inswinging cross from Zackary Smith six yards out.

Buoyed by this opening Taunton began to asset their quality with a spell of sustained possession that saw their next opportunity on 63 minutes; Tobias Holmes breaking through with pace but seeing his low effort denied by the gloves of Ellis Grant. And after a quiet period due to an injury to Buse in the away sticks, the Gosport goalkeeper drew applause from the whole stadium with two great saves; first denying Holmes’ powerful strike from close range before somehow stopping a goal-wards effort by Staley with an outstanding finger-tip save away from danger despite the attentions of two away attackers in the box.

After weathering this storm Gosport then saw another fantastic chance to take the lead as build-up play down the right released Kavanagh in space, the right-back’s cross finding Wooden whose hooked shot on the turn drifted wide with Taunton goalkeeper scrambling. With just one goal likely to seal the game Taunton hit the hosts on the counter attack and snatched a late win on 84 minutes; Staley’s low cross converted by Holmes into the open net; a finish that knocked the stuffing out of Gosport as changes for both sides signalled a quiet seven minutes of time before the final whistle.

Taunton’s latest victory means they have only lost one league match since November and sit second in the Southern League table with games in hands on the leaders; hoping to get promotion to the 6th tier of English football. In contrast Gosport sit eighth and remain seven points off the play-off places with just fifteen to play for this season, their next match being a trip to Kings Langley next Saturday afternoon. Attentions will then turn to the Portsmouth Senior Cup final versus Wessex League Premier side Moneyfields on April 6, which will be played at Westleigh Park with a 7:45pm kick-off time.

PICTURED BY TOM PHILLIPS: Billie Busari holds off two Taunton defenders in sunny conditions at Privett Park, but ended up on losing side after late winner on the counter attack for the visitors. 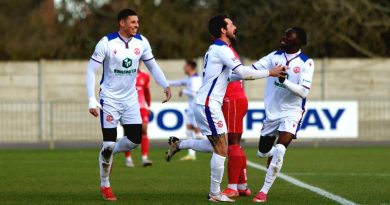 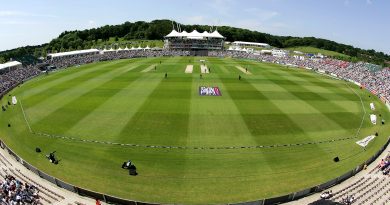