GOSPORT BOROUGH failed to build upon their unbeaten start to 2022, conceding two goals in defeat versus South Coast rivals Poole Town on Saturday afternoon. Goals from Jamie Whisken and Will Spetch sealed the points for the Dolphins at the Blackgold Stadium on Saturday afternoon, with an own goal for Gosport not enough to avoid a ninth loss that sees Shaun Gale’s side falling out the play-off places for the first time since October.

In dry but overcast conditions it was a slow start with Poole dominating the early possession, taking the lead with the first real chance for either side after ten minutes. The opener came from a well-worked corner routine that was floated into a crowded penalty area, Whisken rising highest to nod home past a Gosport defender on the line. Shortly afterwards Corby Moore fired over the crossbar and Luke Burbidge went close in an otherwise quiet opening.

Gosport created their first opportunity after a succession of corners around the twenty-five mark of play, fine interplay resulting in Harry Kavanagh’s early cross finding Dan Wooden to head straight at Poole keeper Mark Childs with a looping effort. Mason Walsh then had a low stringing shot blocked with AJ Harris-Sealy and Billie Busari constantly looking dangerous down the right side, whilst Joshua Carmichael dragged wide a low effort down the other end.

Poole switched into gear with ten minutes left before the break, a cross being headed over and a Spetch effort being brilliantly saved by Albert White in the away goal. But in the thirty-seventh minute the hosts were given a penalty after Rory Williams was adjudged to handle a shot in the box, Spetch stepping up and lashing home the spot kick into the corner. In a last chance before the break, Williams saw a 25-yard free kick easily saved by the home keeper.

And after Poole had hit the post in the 47th minute through Jack Seddon, Gosport started the second half in attacking style and created two chances before the hour mark. Firstly Busari’s header flicked the side netting after a right footed cross reached him in space, before a Luke Hallett shot was blocked with the net expected to ripple in front of the away fans; Gosport often finding good attacking positions but lacked the final pass against a stubborn defence

On 62 minutes Matt Paterson replaced Busari as the visitors made a tactical change, which reaped rewards five minutes later when Gosport reduced the arrears. It came from a corner by Kavanagh which seemed to catch the defence off guard as the final touch seemingly coming off the home keeper into the net for an own goal. Shortly afterwards Wooden had a header that was too tame and captain Mike Carter dragged wide with a low snapshot from 20.

In the 76th minute White produced another sharp shot from Jack Dickson’s deflected shot as Poole nullified Gosport’s attacking threats, looking more likely to score another goal. Midfield substitute Luke Pardoe looked to capitalise on tiring legs as he fired over from close range as Spetch again went close on 88 minutes. Gosport’s last chance came in added time as Ryan Woodford saw his effort blocked by his teammate, the hosts holding on for the league victory.

Gosport’s defeat coupled with victories for Weston-Super-Mare and Taunton Town mean the two Somerset-based teams leapfrog Shaun Gale’s side in the Southern League Premier. Borough will now host two league games in the next week at Privett Park, playing fellow play-off chasers Hayes & Yeading on Wednesday evening with a 7:45pm kick-off, before playing an in-form Harrow Borough outfit next Saturday afternoon. An away trip away versus Met Police will end the month of January in a decisive run of games that could define their campaign.

PICTURED BY TOM PHILLIPS: Gosport fail to break through a stubborn Poole defence in grey conditions on the South Coast 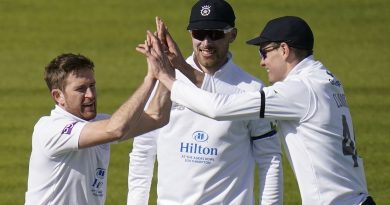 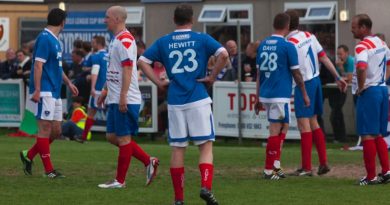