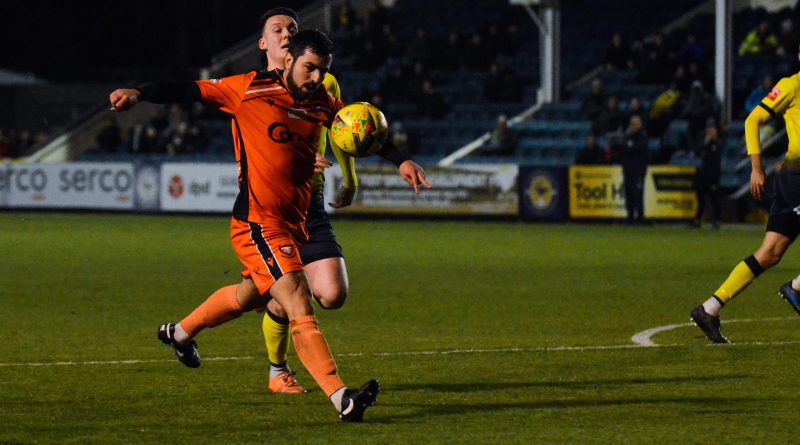 AFC PORTCHESTER’S proud and credible performance ended in vain as they exited the Hampshire Senior Cup on Wednesday night, losing two nil to Farnborough away at Cherrywood Road. But despite coming up just short the Royals were brilliant throughout the ninety minutes and deserved so much more as they pushed their Southern League opponents all the way, before the home quality showed through with two late goals to kill dreams of a first final in this competition for the visitors.

After a cagey opening Portchester created the first opening on nine minutes when a long ball found Felipe Barcelos breaking through the defence, his shot smashing the crossbar and bouncing away to safety. In response Farnborough had a couple of half chances through Mitch Brundle who first shot over from range before seeing his free-kick saved by away keeper Steven Mowthorpe at his near post; David Pratt firing just wide the rebound six yards out from an angle with the goal gaping.

Zak Sharp saw yellow for a misjudged foul on 23 minutes as Farnborough dominated possession and closed Portchester down at every opportunity; a tactic that almost paid off as Curt Da Costa gave the ball away and striker Paul Hodges’ low drive was hacked off the line from Sam Pearce with Mowthorpe out of position. Selim Salid saw a separate effort blocked at source on 30 minutes, whilst good play down the left side ended in Terrell Egbri finding space but miscuing his angled drive harmlessly wide of Mowthorpe’s goal.

Weathering this storm of home pressure saw Portchester gain confidence in attack and they saw the next opportunity on 36 minutes as Connor Bailey intercepted a loose pass in midfield; releasing Barcelos through on goal with a through ball and the striker’s effort was brilliantly pushed away by Farnborough keeper Jack Turner. The Royals were undeterred and went agonisingly close to scoring their opener on forty-two minutes when a corner from the left picked out Sam Pearce at the far post, his header hitting the outside of the post in the final chance before half time with scores remaining goalless.

Farnborough started the better in the second period and should have been ahead in the 49th minute as Portchester were again caught out from a loose pass in midfield. It was picked up and played into the feet of substitute Mitchell Parker down the left, his shot thumping against the post and flying to safety whilst Hodges shot wide from 25 yards moments later. Down the other end Portchester saw a cross by Marley Ridge reach Lee Wort in space, the striker’s low effort gathered by Turner as he beat his marker for pace on 59 minutes.

Following another save by Mowthorpe as he denied Hodges’ low drive, Portchester saw their next opportunity as a long ball was flicked into Wort running at the defence. The striker’s unselfish pass found Ridge sprinting inside the area only to be denied by a sliding tackle as the youngster prepared to shoot, before Farnborough went close down the other end as Michael Fernandes found Parker to shoot wide under pressure from the superb Pearce in defence.

Quality finally showed with sixteen minutes left on the clock as Portchester failed to clear their lines and the ball found Fernandes, who set up Parker again to fire past a stranded Mowthorpe into the corner for one-nil. In response Portchester created their final chance for an equaliser as George Barker found Wort, the striker’s shot cleared off the line from Richard Orlu via a deflection. This proved to be decisive as the hosts doubled their lead with three minutes left as Parker picked up another loose pass to outpace the tiring legs of Portchester defenders, creating space for the low finish into the bottom corner to end the game with a two-nil scoreline after four minutes of additional time.

Farnborough have now advanced to the final of this local competition to play local National League side Eastleigh, with more details to be released on this fixture this Friday (March 11) before their league match versus Yate Town on Saturday. afternoon. For Portchester they will also turn to Wessex Premier action this weekend as they play Hamble Club, before travelling to Brockenhurst in a midweek clash next Tuesday. Dave Carter’s side will conclude a busy week with their home derby match versus Moneyfields, with this postcode encounter taking place on March 18 in a rare Friday night slot.

PICTURED BY DANIEL HASWELL: Portchester striker watches the ball as it bounces into his path as the visitors gave Farnborough a real scare before experience and quality overcame the visitors in cup semi final tie.