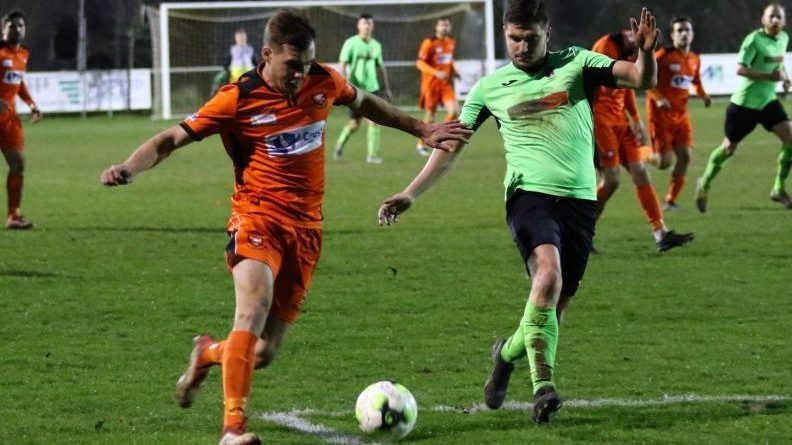 AFC PORTCHESTER bounced back into winning form as they travelled to Alresford Town on Tuesday night, beating the Magpies 6-2 in a thrilling Wessex League Premier encounter following their defeat to Bashley three days earlier. But the scoreline doesn’t reflect proceedings as clinical finishing from a strong away strike-force proved a key difference, including a 30th goal of this campaign for Lee Wort.

On a mild and dry winter’s evening Portchester started well and created their first opportunity in the ninth minute as Marley Ridge found Lamin Jatta in space down the right side, the latter’s angled shot narrowly missing the post with home keeper Callum Smart beaten for post. Moments later fine build up play found Rafa Ramos, the attacker’s stretching and nodded effort sent harmlessly over the box.

Alresford began to slowly work their way into the game with a spell of good interplays on the fifteen minute mark, seeing Harry Barkaway and Brandon Channell both missing the target with low efforts as the midfield opened up for attacking football.   But the home side saved their best opportunity for the 21st minute as a curling free kick was brilliantly tipped over the crossbar by Royals’ Jake Hallett.

And after a series of corners at both ends Portchester took the lead in the 28th minute; a fine passing move finding Ramos who advanced down the wing. His right wing cross seemed to be heading to the feet of George Barker, who dummied the ball to find Wort and the striker made no mistakes in firing home to spark big celebrations; particularly as the hotshot reached the thirty goal mark in 2021-22.

But the Royals were dealt a blow as Alresford equalised on 36 minutes, the ball was worked through to find Barkway and the midfielder collected the through ball before firing home past the new away keeper Hallett in the bottom corner. In response Portchester went close in the final action of the 1st half as Zak Sharp’s cross found the advancing Hoare who fired over the bar from eighteen yards out.

Portchester started well in the second period as Barker saw an effort saved by Smart on 47 minutes, whilst Ramos had a goal disallowed for offside and substitute Bradley Lethbridge lashed over the bar from range moments later. But it didn’t stop the visitors from scoring just after the hour mark when Lethbridge’s delivery finding Ramos whose header hit the top corner via slight defensive deflections.

It was three-one on 66 minutes when Portchester won a corner that was taken by Lethbridge whose delivery again found Ramos, the striker’s header across the box finding Barker to flick home from six yards. Down the other end Alresford made two fresh changes off the bench which seemed to give a slight lift, both Christian Andonov and James Parker-Trott seeing opportunities to reduce the arrears.

Portchester did make it 4-1 with fifteen minutes left on the clock as Lethbridge became provider yet again, playing a reverse pass to find Connor Bailey down the right. Although the wing-back’s shot in the area was blocked, the loose ball finding Barker who simply slotted home. It soon became 5-1 as a long ball found Wort who doubled his tally with a fine chipped finish over the quick Alresford goalie.

Alresford scored what proved to be a consolation goal on 84 minutes to make it five-two, a pass into the box landing at the feet of Mike Gosney who beat a defender and slotted home past Hallett’s low dive to his right. And in the final moments Portchester made it six when they won a free kick, Bailey showing great vision to lob the stranded Smart from 40 yards as he saw the keeper off the goalline.

This proved to be the last action of the match as Portchester sealed a fantastic away victory, lifting them back into eighth place with twelve games left to play following other results. Dave Carter’s in-form side will now host Christchurch on Saturday afternoon at the On-Site Group Stadium (3pm KO) before playing the reverse fixture away at fifth place Bashley seven days later at the Glen Mac ground.

PICTURED BY JORDAN COLBORNE PHOTOGRAPHY: Portchester and Alresford Town clash played in December 2019 at the On-Site Group Stadium, which ended 1-0 to the Magpies as they chased promotion to the Southern League. 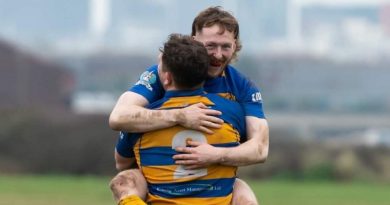