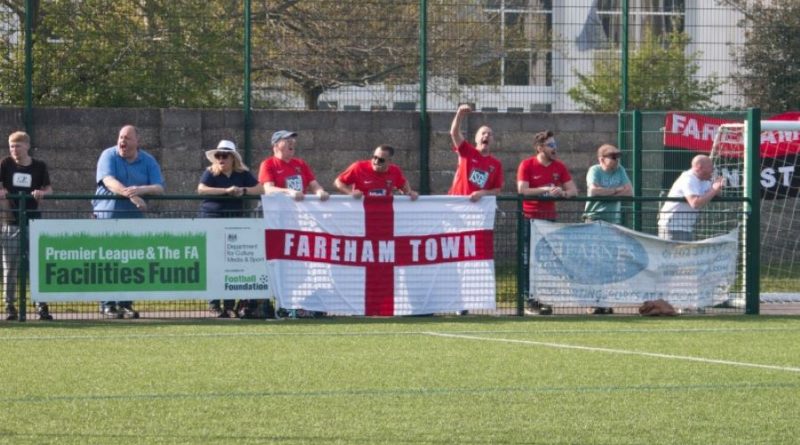 FAREHAM TOWN concluded their league campaign in losing fashion as they narrowly lost two-one away at Poole-based Hamworthy United on Saturday afternoon; despite a credible performance against the Wessex League champions in lovely spring sunshine at the County Ground. Although proud of his players Pete Stiles will no-doubt be wondering what could have been as his side missed a first half penalty, had another goal disallowed and didn’t take advantage of a red card for the hosts during a highly watchable ninety minutes.

The Creeksiders started well and quickly adapted to the artificial pitch surface, narrowly shading possession and creating the first chance after ten minutes; an effort from Josh Benfield reaching Casey Bartlett-Scott who fired over from a tight angle. Two minutes later Hamworthy punished this missed opportunity as they took the lead as a skidding shot was parried away by away goalkeeper Henry Woodcock; the Fareham defenders unable to clear to safety and Lee Francis was lurking to sweep inside the bottom right corner.

Fareham responded well with Ethan Jones looking good down the left, his link-up play with Ryan Mackney seeing Benfield head straight at home goalkeeper Shane Murphy just under the crossbar. The visitors were then offered an even better chance on 25 minutes when Benfield was fouled in the box chasing a long ball by Maxwell Buckler, who was shown the red card for being the last man by the referee. But the home fans were celebrating as Murphy pulled off an excellent penalty save diving to stop Charlie Cooper’s rebound.

As proceedings reached thirty minutes Fareham were on the wrong end of a referee decision as Cooper set up Benfield to fire home with ease; only for the goal to be disallowed for a soft foul in the build-up. But this didn’t deter the Creeksiders as they created further chances as Archie Wilcox headed wide an out-swinging corner and Keiron Clark’s looping effort drifted over the crossbar; whilst Bartlett-Scott forced another good low diving save from Murphy in additional time with Hamworthy leading one-nil at the half-time interval.

The champions came out attacking upon the restart as Matt Neal and Max Wilcox seeing shots saved by Woodcock; the latter also heading wide after a cross down the right on 55 minutes as Fareham stood firm in defence. This gave the visitors a platform to attack just before the hour mark as Ashley Tattersall’s diagonal shot was parried away by Murphy and Benfield fired wide the follow-up; their best chance coming on 64 minutes when Cooper’s cut back found Rowthorn whose low shot was blocked at source by a fine tackle.

Two Fareham substitutes disrupted their momentum however and Hamworthy took full advantage as they broke forward at pace with Tony Rolls’ clever threaded pass finding Cameron Munn in acres of space; the forward quickly advancing towards goal before being fouled by Clark for a penalty. Up stepped Steve Devlin whose effort rolled into the far bottom left corner, sending Woodcock the wrong way from twelve yards and doubling the champions’ lead with seventeen minutes left; Hamworthy making three changes in response.

Fareham reduced the arrears just sixty seconds later as substitutes Tom Settle and Siph Mdladlose linked up; the latter firing home into the left post from about 15 yards out with a crisp strike. And the Creeksiders dominated in the final ten minutes with a series of Jones’ throw-ins causing problems; only some hectic defending led by Rolls and Adam Costello denying the away side an equaliser. There was however a late scare for the champions in stoppage time when Dan Bennett found space and fired towards goal; Murphy sealing his fine performance with a firm low save as Hamworthy held on for the hard-fought three points.

For the champions they have won the league with a nine-point gap with Bashley in second, who have also won promotion to the Southern Premier on a points-per-game ranking. In contrast Fareham finish with 13 wins, eight draws and 19 defeats from their allocated games; sitting twelfth in the table with only Blackfield & Langley able to overtake them. But despite an inconsistent league campaign the Creeksiders do have hopes of winning silverware at the end of this month as they face Shaftesbury in the Wessex League Cup Final; the decider set to be played on April 30 at the On-Site Group Stadium in Portchester with a 3pm kick-off time.

PICTURED BY FAREHAM TOWN MEDIA: Away fans enjoy the spring conditions at Hamworthy United, watching their side lose two-one despite the champions playing with ten men after a 1st half red card. 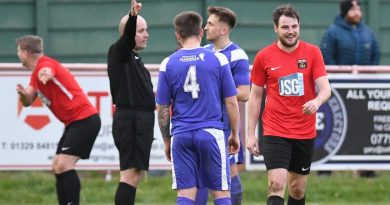 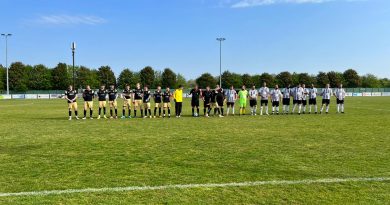