FIVE Afghan evacuee families have moved into MoD accommodation in Gosport while Hampshire County Council has found temporary accommodation for more than 50 families.

This is likely to be the initial stage of the local response to the Government’s Afghan citizens’ resettlement scheme pledge that it, “will welcome up to 5,000 vulnerable Afghans to the UK, who have been forced to flee the country, in its first year, with up to a total of 20,000 in the long-term”.

Councillor Graham Burgess, Leader of Gosport Borough Council, told The Globe: “I can confirm that, working with the Ministry of Defence, we have welcomed five families to the area, and they are now safely housed in MoD married quarters. These are families of Afghans who have loyally supported our Armed Forces.

Mr Burgess also addressed the question raised by a Globe reader of whether accommodating Afghan families would at the expense of those on the council’s waiting list and desperate for a home.

He said: “The scheme uses vacant MoD properties in the borough, with Gosport Borough Council helping the families settle into the area. The scheme is fully funded by the government and the MoD properties are not homes available to the council.”

At county level, a spokesperson stated: “The county council and local partners, including district and borough councils, NHS, support providers and local charities, are committed to continuing support for Afghan families arriving in Hampshire as part of the government’s resettlement scheme.

“At present some 50 families are being collectively supported in temporary accommodation pending national decisions being taken on their long term future and relocation.

“We would anticipate that some may remain in Hampshire, while others will move to locations beyond our county – and in half a dozen cases, the latter has already occurred. Over the next few days, we are preparing to welcome more evacuees but the numbers are unknown at present.”

Praising the way in which Hampshire people have responded to the plight of the Afghan evacuees, the spokesperson added that the charity Community First, “is co-ordinating donations across the county, working alongside more than 30 local community organisations, [and] has welcomed a huge number of donations and offers of support.

“Work is now ongoing to collect and distribute much-needed items to Afghan families who have expressed their gratitude for the public’s support.

“Anyone wishing to donate is being asked to check the Community First website, where there is an updated list of what is still needed.”

Fareham Borough Council has set up a dedicated Afghan response webpage which states that it expects to receive its first Afghan family in the coming weeks.

Like Gosport, Fareham Borough Council is aware of balancing the accommodation of the Afghan evacuees with that for local people and a spokesperson told The Globe: We are appreciative of the demand on social housing in the borough and therefore the needs of our residents (and of those requiring accommodation as a result of supporting the British troops in Afghanistan) are dealt with equitably.

“Alternative options for accommodation will be considered, such as from the privately rented sector, and therefore we would urge landlords to contact us at Housing@fareham.gov.uk if they would like to offer a property for letting to an Afghan family.”

Given the government’s promise of resettling 20,000 Afghan people, more accommodation and support is going to be required over the coming years but Gosport Leader Mr Burgess said: “The government’s resettlement plans are still taking shape.

“As yet, we have not been asked to receive any more families.” 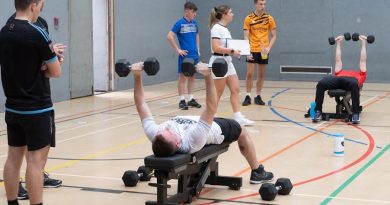 Details of Gosport’s Commemorative Benches policy to be published soon