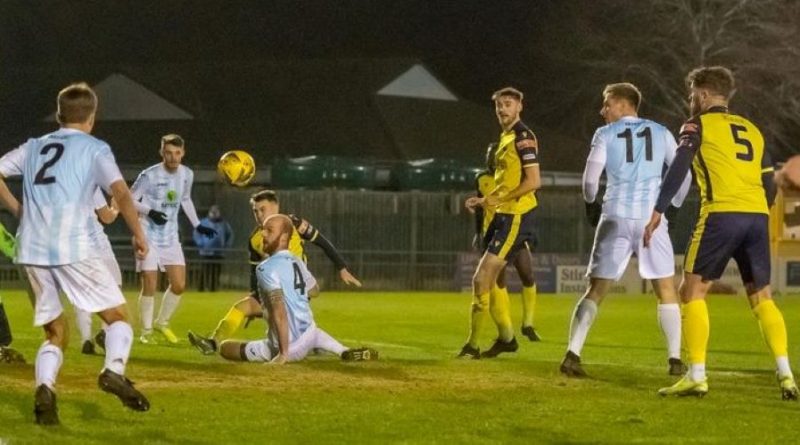 GOSPORT BOROUGH advanced to the semi-finals of the Portsmouth Senior Cup following a professional performance, beating United Services Portsmouth (USP) four-nil at Privett Park on Wednesday night in their quarter final clash in front of a large crowd. In chilly but dry conditions Borough started brilliantly and backed this up with three goals in the second half, with Wessex League Premier outfit USP showing great effort and heart despite defeat against higher league opponents from two divisions above them.

Gosport made a positive start to proceedings as Rory Williams’ cross found Matt Paterson, who was allowed to turn and shoot wide via a deflection. From the resulting corner an inswinging delivery by Harvey Rew ended in the bottom left corner off USP keeper Dylan Kramer, giving the hosts an early lead after just two minutes. It was an advantage that helped to calm nerves as Borough controlled the possession but were unable to turn this into meaningful opportunities, a rising shot by Paterson the closest to a second goal on sixteen minutes.

USP slowly worked themselves into the game and had their first opening after 20 minutes as the ball was played into Luke Slade, whose shot was deflected harmlessly over the bar and the corner easily cleared away by home defender Matt Casey. Moments later Gosport hit the visitors on the break as Nick Dembele ran through on goal but ran out of both angle and control as the ball was stopped by Kramer down low; whilst Billie Busari dragged wide as he cut inside after good link up with Williams and Ryan Pennery running down the left wing.

The visitors saw some hard-earnt possession just after the half-hour mark, seeing efforts from Slade and Yusapha Badjii in quick succession. But in truth Gosport were looking the more likely to add their second goal, Harry Kavanagh wasting a good free kick by curling wide, whilst Dembele fired over from an angle. They did save their best chance until before half time, Pennery collecting a threaded pass and running through on goal, but saw his low shot saved by the legs of Kramer who claimed the ball as the referee blew for the interval with USP trailing one-nil

USP started the second period well with a series of set pieces that saw Cameron Quirke go close, the latter being a free kick from Owen Scammell that was straight at home goalkeeper Ellis Grant. But in fairness Gosport’s backline did look composed and this pressure was calmly averted, giving attackers the platform to push forward; a tactic that worked well as substitute Mason Walsh was fouled in the penalty area for a soft spot kick. Up stepped Matt Paterson who made no mistake, sending Kramer the wrong way as he slotted home easily.

Following substitutions for the visitors and a number of minor half chances, Gosport made it three-nil on seventy six minutes as good football set Bradley Tarbuck free on goal inside the area. He spun his marker and played a great ball into the feet of Paterson, who expertly finished home with a side footed effort into the right corner; the striker quickly being substituted to deny him a chance for his hat-trick. His replacement Alfie Stringer attempted to make an immediate impact as he tried to set up Walsh, but his pass was cleared away by the USP defence.

But Gosport weren’t to be denied for longer as they did make it four-nil on 87 minutes with a fine goal by Walsh, a cross from the right falling to the winger who took one touch and fired home into the top corner from over 25 yards to gain applause from around Privett Park. There were further chances as Busari fired over the bar with a curling effort whilst under-23 starlet Stringer forced a diving stop by Kramer between the away sticks. Down the other end Tom Jeffes saw a shot saved by Grant’s legs in the final chance of the game, but the damage had already been done.

Borough’s semi-final opponents are not yet known at the time of writing, with Shaun Gale’s team now needing to turn their attentions to key away league encounters over the next seven days. They will visit the Met Police on Saturday afternoon before travelling to Hendon for their rearranged game next Tuesday (February 1). Gosport will then host table toppers Farnborough in their next home encounter in ten days’ time before traveling away to Hayes & Yeading as they look to get back into the play-offs after slipping out of the positions in recent weeks.