GOSPORT waterfront welcomed over 3,000 people yesterday as the Gosport Marine Festival took place, getting hundreds of young people and their families out on the water.

Opened by former First Sea Lord and Chief of Naval Staff, Admiral Sir Jonathon Band, with the Mayor of Gosport, Councillor Mark Hook, this free community event aimed at connecting people with the sea and encouraging children and young adults onto the water, did just that – with over 350 individuals trying out the different watersports including sailing, kayaking and stand-up paddleboarding.

“We’re delighted with the turn out today,” said Barry Easton-Corke, Gosport Marine Festival chairman. “Now in its fifth iteration, the festival is as popular as ever with hundreds of young people and their families getting out on the water and over 3,000 people coming down to enjoy a fun-filled day out, making the most of the onshore activities and experiencing Gosport at its best.

“This event just wouldn’t have been possible without the brilliant support of the many local businesses, charities and over 150 volunteers who have so generously donated their time, money and resources. Today’s success is down to them, and I’d just like to say a massive thank you.”

While the waterborne activities took place throughout the day in Haslar Marina and on the Cockle Pond, the many visitors to the waterfront enjoyed a full programme of onshore entertainment, commencing with a Sea Cadet and Scout parade in the Millennium Timespace with the Rose and Thistle Pipes and Drums.

All the entertainment was provided by local artists and included swing music, sea shanties and rat pack crooning, with the Portsmouth Military Wives Choir performing to as the festival drew to a close.

Visitors were also able to get aboard several historic vessels moored in Haslar Marina for the festival, including Medusa, one of the first vessels to arrive at the Normandy beaches ahead of the D-Day landings, the junk yacht Boleh designed and built in 1948, WW2 High Speed Launch 102 and a landing craft.

In addition, for the younger children in Holy Trinity Church, there were nautically themed arts and craft activities at Little Shipmates, while Circo Rum Ba Ba women’s theatre troupe used puppets, comedy, music and an enormous inflatable sperm whale to highlight the challenges to the marine environment to 300 spectators.

“The kids got out sailing and kayaking today,” said one attendee, visiting with his family. “It’s been a great day out, with lots to see and do.”

New to this year’s event was the Inspiration Zone in the Trinity Church. This area brought together local marine companies offering careers advice to young people wanting to work in the marine industry. Companies who exhibited included, the Royal Navy, Marine Concepts, Seldén Masts, Qinetiq and the Andrew Simpson Foundation.

Christopher Groves, underwater business development lead at Gosport based Qinetiq said: “We’ve had in excess of 400 people come into the Inspiration Zone and they’ve engaged really well with the marine industries here.

“It’s been a fantastic opportunity for companies to show what they do and to expose young people to what the opportunities are from a career perspective on the Gosport peninsula, and Portsmouth Harbour more generally.” 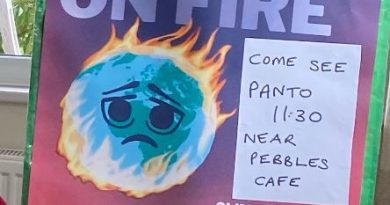