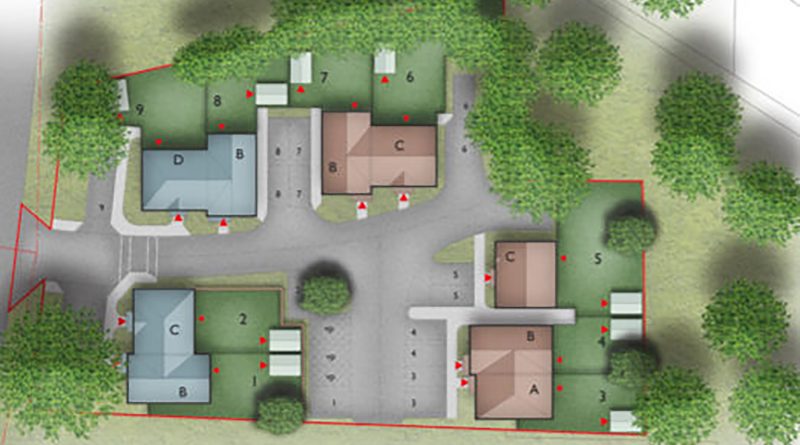 By the narrowest of majorities, a plan to build houses on the former Sailors Rest site in Grange Lane, Gosport, has been approved by the borough council.

It was the first face-to-face meeting of the Regulatory Board since the beginning of the Covid-19 pandemic. Following May’s local elections, Councillor Lynn Hook took the chair of the new-look board which met at the Thorngate Hall so that social distancing could be maintained.

But there was no hesitancy as the board members got embroiled in debate when the first substantive item came up for discussion – Driftstone Homes Limited’s proposal to build one two-bedroom and eight three-bedroom houses on the site of a former community centre.

Much of the board’s discussion was concerned with the majority of the site having been earmarked in the council’s Local Plan for ‘Existing Community and Built Leisure Facilities’.

The community centre was demolished in 2014 following a fire and so the focus was whether there was a demand for a facility to be built.

The planning officer’s report noted that various marketing exercises had been carried out by Driftstone but they had, “generated little interest and no firm offers.”

This was confirmed in the deputation by a representative for Driftstone though he admitted when questioned that one charity has expressed an interest but would not have been able to afford the rent necessary to make the building of a community facility financially viable.

Councillor Margaret Morgan (Conservative) represents Grange ward and is also the council’s Youth Champion. Her view was that there is a demand, particularly for an indoor skate park.

She was joined by Councillor Diane Furlong (Conservative, Hardway) in describing as “miniscule” the £15,000 offered by Driftstone as a contribution to the improvement of community facilities near the site.

On the other side of the debate, Councillor Richard Earle (Liberal Democrat, Elson) said, “the chances are it will remain vacant” while, “we need the houses”.

At one point, Councillor Graham Burgess (Conservative, Lee East) exclaimed almost in exasperation: “either we have a policy or not”.

However, in the case of the relevant policy – PL32 – in council’s Local Plan, exceptions are permitted in certain circumstances and for the majority of Regulatory Board members those conditions had been met – though judging by the one vote majority, only just.

The board also granted planning permission for:

The planning officers had recommended approval for all three of these housing planning applications.

There is a separate report of the Regulatory Board’s decision on the proposal for an additional shop at Brockhurst Gate.