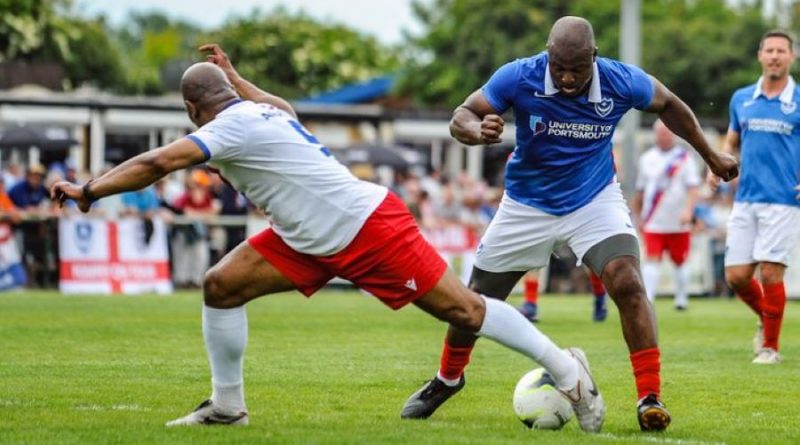 NEARLY TWO THOUSAND spectators were treated to a fourteen goal thriller on Platinum Jubilee Friday as the Lee Rigby Memorial Cup returned to Portchester, with Portsmouth Legends winning 8-6 against their Glasgow Rangers counterparts on a sunny and atmospheric Bank Holiday afternoon at the On-Site Group Stadium. But ultimately the result didn’t matter as football fans came together to pay tribute to the murdered soldier and raise much needed funds for the charity; a marching band and two minutes’ silence featuring alongside many poignant touches from both teams of legends.

Kicking off for the first time in three years due to Covid-19 lockdown rules, the annual charity match saw its first goal within just three minutes; Brett Pitman sending an ambitious effort over the keeper into the top corner after good work down the right side.  Fans from across the country were then treated to another thirteen goals throughout the afternoon; including finishes from Yakubu, Pedro Mendes, David Morris and Mark Hateley across both teams who left everything on the pitch. Other appearances included those from ex-stars Alex Rae, Mark Walters, Marvin Andrews and Michael Mols.

Off the pitch was just as entertaining with fans creating a brilliant atmosphere throughout the ninety minutes; chants, drums, clapping, and general chatter filling the air around the packed crowd. Flares were also lit at regular intervals throughout the afternoon to bring some extra colour, a scene that has been seen at high profile football matches over recent weeks. However everybody at the match was respectful and helped raise thousands of pounds for the Lee Rigby Foundation; which aims to provide a support network for bereaved military families, veterans families and serving military families whilst furthermore being inclusive of recent terrorist actions both in the United Kingdom and beyond.

Former SAS soldier and successful author Phil Campion featured within the Rangers’ squad for the match, offering his thoughts in an interview with AFC Portchester’s media team upon the final whistle and trophy presentations on Friday afternoon. He said: “This has been a great day and it is fitting the event has taken place on the Jubilee Bank Holiday. It is so important we remember Lee Rigby and what all of our armed forces personnel do when serving our country. It’s what our country is all about, it’s what makes us and we’d be nothing without it – so we should remember and celebrate it.”

Former Portsmouth striker Morris, who is a cult hero at Fratton Park after his goal versus Southampton over a decade ago, further praised everybody involved in Friday’s joyful but poignant occasion as he added his own thoughts after the post-match celebrations, saying: “I didn’t expect the turnout we got here today. The atmosphere was brilliant. It’s for a great cause and what a great day it’s been. There’s a great set up here and it has been organised well. It looks like everyone’s had a good time.”

More information about the Lee Rigby Foundation can be found here, whilst two separate albums featuring both on / off the pitch action can be seen on the AFC Portchester website after being taken by their club and award winning photographer Daniel Haswell. Portsmouth Sport were furthermore in attendance at Friday’s match and their report on the occasion can be read online here.

PICTURED BY DANIEL HASWELL: Rangers defender tries to prevent a shot from Yakubu as legends face off in return of Lee Rigby Memorial Cup encounter on Friday afternoon.