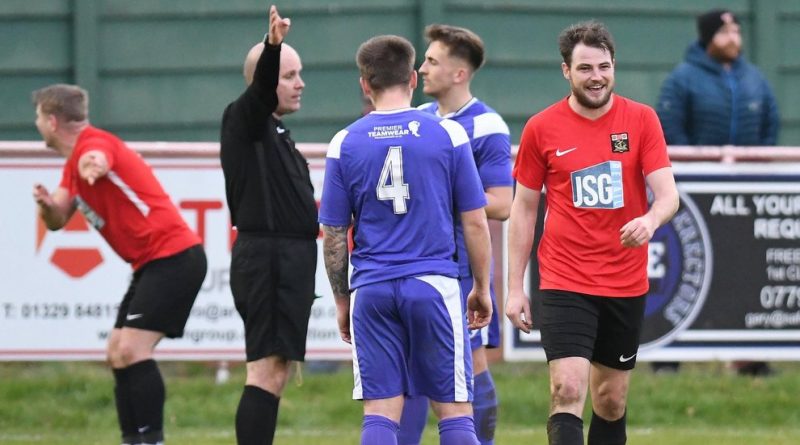 FAREHAM TOWN continued their struggles against AFC Stoneham following a six-one defeat against the Eastleigh-based outfit in October 2021, losing 5-0 to the same opponents at Cams Alders on Saturday afternoon. In dry but cold conditions the visitors were simply clinical and delivered a five star display across the pitch, consigning Pete Stiles’ men to a second straight league loss after a two-nil defeat to Horndean in midweek.

Stoneham started brightly with gusty winds affecting the Fareham defence, who let a long ball find captain Jim Orvis down the right; the winger’s cross finding Scott Hills at the back post to fire past a static home goalkeeper Jay Morris at his near post. The hosts then created their first opportunity as a free-kick from the right was met by the advancing Stuart Morgan who headed just wide; the match turning slowly into a cagey midfield battle.

Fareham did see chances through Archie Wilcox and Jack Breed in a five minute spell, but it was Stoneham who scored their second goal sixty seconds before the half hour mark. A cross from a free kick was cleared into the path of Will Wiseman, whose looping header beat the dive of Morris before nestling in the bottom corner. It could have been 3-0 moments later as Duarte Martins fired harmlessly over the crossbar when put through on goal.

In response came Fareham’s best chance of the first half on 35 minutes as a pass found Morgan breaking through the tackles of defenders Cade Dyer and Jamie Bulpitt, but flashed a low effort wide of the post with Stoneham keeper Tom Parker-Trott beaten. This was a missed chance to rue for the Creeksiders’ as the visitors made it 3-0 in the final action before the break, a low cross into the box converted by Martins in the penalty area with a simple finish.

Although Fareham came out firing after the interval with Breed going close on 46 minutes as he ran through and fired wide into the side netting, all home hopes of a comeback were ruined as Stoneham added a fourth goal sixty seconds later. A long ball was played into the wind and caught the home backline out of position, reaching Orvis who ran through on goal un-tackled  before chipping the advancing Morris into the bottom right hand corner.

And the match was killed as a contest when Stoneham made it 5-0 after just fifty-one minutes, Martins running through the backtracking home defence and firing home his second of the afternoon by slotting home past Morris. With the game lost Fareham made two substitutions and these changes seemed to stabilise the flow of away attacks;  Wilcox dribbling into the box and finding Josh Benfield, whose effort went just over the crossbar.

Ethan Jones went close from a corner with 20 minutes left to play and Breed saw a decent shot on goal with twelve left to play; Stoneham also creating chances as Ryan Penny fired over, whilst Martins nearly sealed a hat-trick when he drifted a header wide of the post. But with the game reaching it’s conclusion, frustrations boiled over as Dan Bennett saw red for a late foul and a Stoneham player was also sent off for headbutting in the melee.

This didn’t change the final 5-0 score-line as Stoneham held on for the clean sheet, keeping their sixth place position with another big win on the win. In contrast Fareham have fallen down to 12th in the Wessex League after 29 matches played following other results, now facing a two week break before facing Hamble Club on February 19 at Cams Alders. The Creeksiders finish this month with a derby clash versus Moneyfields seven days later.

PICTURED BY NEIL MARSHALL: Dan Bennett is shown the red card in the 89th minute as Fareham suffer miserable afternoon in five-nil defeat versus AFC Stoneham on Saturday.