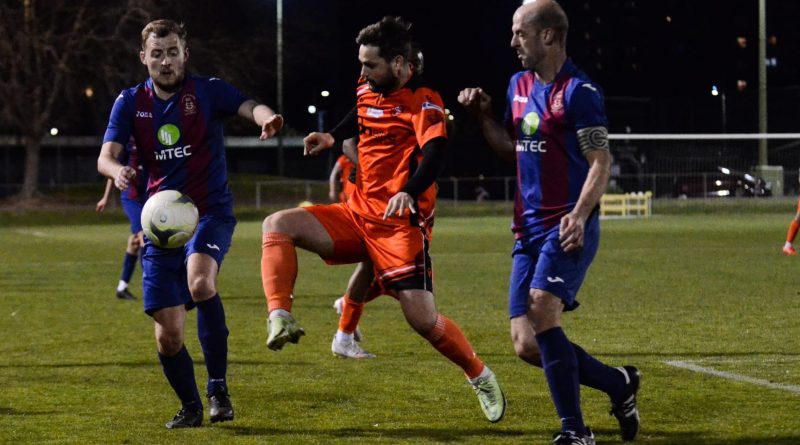 AFC PORTCHESTER concluded their 2021-22 away campaign with another professional and dominant display on Tuesday night, beating local postcode rives US Portsmouth three-nil at Burnaby Road. It was a night to remember for the visitor but in particular George Barker, who scored a hat-trick to seal the points for Dave Carter’s side on a dry but chilly evening; his only criticism being that they could have won by more in another superb attacking display away from the On-Site Group Stadium.

The Royals started the better under lights and almost took the lead within seven minutes as home goalkeeper Dylan Kramer misjudged his clearance into the path of Conor Bailey; who attempted to convert into the unguarded net but the shot lacked power from forty yards and the ball was stopped by a defender. This scare seemed to spark US Portsmouth into life and they saw two quickfire shots from Simon Woods saved comfortably by away keeper Steven Mowthorpe; the latter on 11 minutes.

Portchester scored on the quarter hour mark as the ball was worked to the feet of Rafa Ramos down the left, feeding the overlapping Barker who curled his show into the far corner past Kramer; coming after the same player had a goal disallowed for offside and Sam Pearce had hit the post. And it was a lead that was doubled on 19 minutes as Barker made it two-nil after collecting the ball from a partial clearance; firing through a crowd of players and a minimal deflection took it into the bottom corner.

Following this lightening spell proceedings passed the half hour mark without further incident, with shots from Woods and Joe Johnson for the hosts breaking up the Portchester dominance. But there was a series of chances for the visitors before the interval with Ramos and Harvey Aston seeing low shots saved by Kramer; whilst Felipe Barcelos and Barker fired just wide in a matter of minutes with referee Nick Mason blowing the half time whistle following a very short period of additional time.

Although the hosts started well upon the restart as they saw Vinnie McGee fire over and left back Josh Stream drag wide from an angle, Portchester were creating the better chances as Barcelos was put through on 53 minutes only to see his effort blocked at source by home defender Ryan Smart; the rebound fired over from close range from the lurking Jake Raine on the edge. Moments later Curt Da Costa headed wide from Marley Ridge’s inswinging corner as the game drifted towards the hour without further goalmouth action.

Substitutions signalled a slight lull but Portchester kept pushing and got their reward with their third goal of the evening on sixty-nine minutes; ending the match as a contest in the process. It came from a flowing move starting with Mowthorpe with the ball reaching Barker, who took a touch to stead himself and beat his marker before finding the bottom corner with a hat-trick finish leaving Kramer no chance; Barcelos and Ramos also seeing shots drift harmlessly over or wide as they pushed for a fourth.

The fresh legs of Luke Slade seemed to offer US Portchester hope of gaining a consolation goal later on as the ex-Fareham man fired wide under pressure, his fellow change off the bench Charlie Bell forcing Mowthorpe into a low save in the 89th minute. Down the other end Portchester had more changes to add a fourth goal as Barcelos shot straight at Kramer when well placed, with Ramos pulling his late effort wide of the target after cutting inside down the wing in the final chance of stoppage time.

This victory means that Portchester end their allocated twenty away games this campaign with ten wins, four draws and six defeats; which has seen them maintain seventh place in the Wessex League table above Moneyfields having played one game more. Dave Carter’s men end the season with two final home games starting with the champions-elect Hamworthy United in a highly anticipated clash on Saturday afternoon, before hosting mid-table side Portland United in their finale on Easter weekend.

PICTURED BY DANIEL HASWELL: Portchester attacker evades the attention of two US Portsmouth defenders in brilliant away performance and result to end their travels during the 2021-22 campaign. 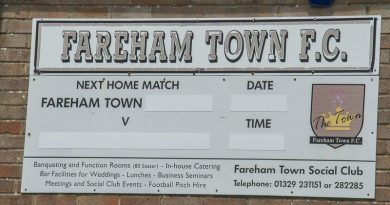 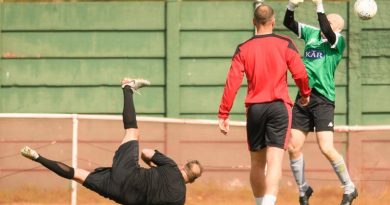