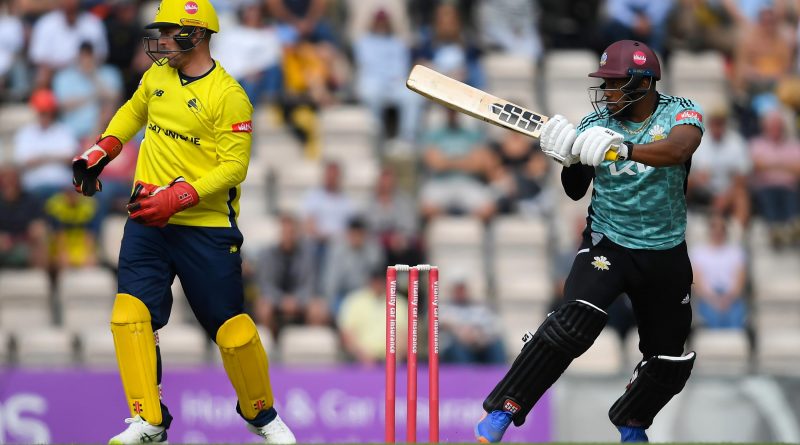 SURREY CRICKET CLUB made it eight wins from nine Blast games and continued their unbeaten start across all domestic formats on Sunday afternoon, beating Hampshire Hawks by four wickets at the Ageas Bowl. Under grey skies tight bowling gave the visitors a platform that wasn’t missed by the batters led by a brilliant display by West Indian all-rounder Kieron Pollard; who sealing their victory with five deliveries left to play in Southampton despite the best efforts of James Fuller with both bat and ball throughout this match.

Asking to field first Surrey started badly as James Vince hit two boundaries in the opening over from spinner Daniel Moriarty with Ben McDermott slogging another four into the cover areas as the pair reached 19-0 in the third over. Then came the first loss as the Australian opener was caught off Guy Atkinson for 19-1 before Vince and Prest picked up where they left up as they hit twenty-two quick runs including 4 more boundaries as Hampshire reached 41-1 at the end of the six over powerplay against some much tighter Surrey bowling.

But this innings platform was destroyed as Vince (30) and Prest (13) were both removed by Jamie Overton’s bowling in the seventh over, signalling a fifteen ball spell that yielded just seven runs scored as outstanding fielding prevented any scoring chances. This led to frustration from Toby Albert who was caught off Sunil Narine for three, whilst Joe Weatherley became the fifth Hampshire wicket to fall following two huge sixes in the middle offers; the big hitter becoming Atkinson’s second wicket as the hosts were 92-5 in the 14th over.

Hampshire’s innings looked precarious with the sixth wicket lost just four balls later, Ross Whitely superbly dismissed caught and bowled from a diving Chris Jordan to leave the scores 94-6 with five overs left. This brought Fuller to the crease and aided by Dawson’s quick running, hit three fours and two brilliant sixes in his 39 unbeaten runs as the pair brought up a 52-run partnership. The only blip in the last five overs came when Dawson (13) was run out by Overton with 3 balls left, Nathan Ellis not scoring as the Hawks reached 151-7.

In response Surrey made a slow start as they scored five runs through Will Jacks, who was then dismissed in the second over with Dawson’s delivery finding an edge to Crane This meant that Jamie Smith and Laurie Evans came together at the crease, the former playing a wide range of shots hitting five boundaries including three over mid-off as the visitors passed the fifty mark just after the powerplay. However they did lose their 2nd wicket as Smith was out for twenty five runs, leaving the scores on 52-2 in the 7th over of home bowling.

New batsman Narine came with one four and a maximum in his eleven runs before he was taken by a grab from Weatherley off a Crane spin-delivery, whilst Evans continued his accumulation with a series of powerful drives to push them ahead of the run-rate at the half-way point. And despite Evans (29) falling to Fuller’s out-swinger that was driven to slip, Pollard took control as he smashed three fours and two sixes in his thirty-four runs off 23 balls; aided by English international Rory Burn’s quick running between the two sets of stumps.

With twenty-two runs needed off five overs for victory, Pollard attempted one big shot too many and was superbly caught on the square boundary to become the fifth victim; the next batter Overton joining him the following over as he was stumped to leave the scores on 131-6. But this very hopeful glimmer was quickly slammed shut by Burns who kept the scoreboard ticking over with only a single boundary for his twenty-one unbeaten, whilst a maximum from Jordan and a wide from Chris Wood ended the contest with five balls left.

Following this defeat Hampshire have dropped to fifth in the South Group after ten games played behind Gloucestershire on net run-rate, whose match on Saturday night was abandoned due to wet weather in the area. The Hawks will hope to regain a potential quarter final spot this week when they play Somerset away on Thursday night before travelling to Gloucestershire on Friday for a crucial match; their next first class game seeing them play Essex away in a four day game starting next Sunday (June 26) at Chelmsford.

PICTURED BY SURREY CRICKET: Ben McDermott looks on as batsman drives a bouncy ball away for four. 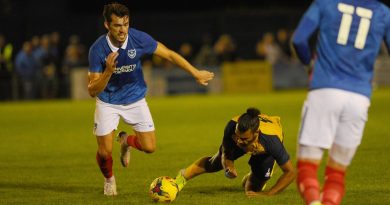 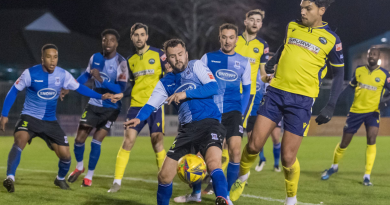