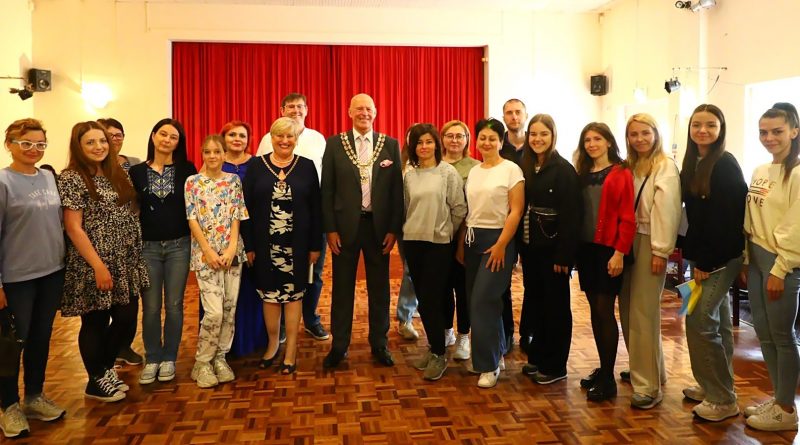 THE Fareham and Gosport Ukranian Community Support group was visited on Sunday, June 5, by the Mayor of Fareham, Councillor Michael Ford and the Mayoress, Mrs Anne Ford, at Fareham Working Men’s Club in Mill Road.

The group was set up to offer support to Ukrainian families, new to the area as a result of the hostilities in their homeland, and their hosts in Gosport and Fareham.

At the UK government’s request, many thousands had volunteered to become hosts to these women and children. However there was no established procedure to respond to such an emergency and many potential hosts have become disillusioned by the bureaucracy involved and the length of time it was all taking to process applications for both sides.

Lauren Brown, from Fareham, who has been volunteering locally for several years and is herself hosting a Ukrainian, and Alesya  Boiko, a Ukrainian who had been visiting her mother and stepfather in Gosport with her children when the situation in Ukraine made their return home impossible, set up the support group for guests and hosts in this area.

Figures are approximate but the estimate is that there are 35 Ukrainian families and individuals  in Fareham borough and 40 in Gosport and Lee-on-the-Solent.

Ukrainians and their local hosts have been meeting in Gosport for several weeks at Christchurch in Stoke Road. and Sunday, June 5, was the first time the group had met at FWMC in Mill Road. It will now meet  on alternate weeks in FWMC and Christchurch, Gosport on Sunday afternoons.

Without exception, the guests told The Globe that they have all felt welcomed in England and are very grateful for the support they are receiving. In Ukraine they had a good lifestyle and many were the ones who would help others less fortunate. To now find themselves living in a different country, separated from family and friends who continue to live in danger fearful of what each day may bring, and now reliant on the kindness of strangers is a huge upheaval physically and emotionally. This is a steep learning curve for guests and hosts. Something a year ago no-one ever foresaw.

Some of our local hosts were matched to the Ukrainians they are now accommodating through the Facebook group Sunflower Sisters-Ukraine /UK.

Alesya’s daughter, Katya, is now attending Brune Park School in Gosport where she has  settled in well and made friends. She said that she was a bit shocked to learn that here there is no three-month summer break from school here as there is in Ukraine!

Other newly arrived children are already in school. Those still waiting for places in local schools are being home schooled with on-line lessons from Ukraine. Most Ukrainians adults and children can already speak some English and an adult English class has been set up by St Vincent College in Gosport to support the new arrivals.

FWMC allows the group access to its wi-fi which is very much appreciated by the guests who are doing their best to stay in touch with family and friends they are now separated from. I was told that they are particularly grateful to Egon Musk, CEO of Tesla Motors, who has funded to place a communications satellite over Ukraine to facilitate contact. On the subject of technology, a recently arrived 16-year-old  is in urgent need of a laptop to enable him to do his schoolwork. If anyone can help by donating one, either new or in good condition, it would be really appreciated.

The filling of forms after their arrival has been daunting with pages to complete and some of the sections being inappropriate to their situation. Local residents who can translate and assist are worth their weight in gold. The application process to be completed to assure them of British residency for up to three years has meant some being obliged to attend an interview in person in London or Reading and, more recently, Southampton.

At a local level, registering with local GP surgeries has been completed for new arrivals and Lloyds Bank, Gosport, has been particularly helpful assisting the new residents to open bank accounts. They can find ingredients in local shops here to cook meals they are familiar with. A host told me that in her home guests and hosts cook for the whole household on alternate days saying: “We all use the same ingredients basically but just cook them in different ways.”

The biggest frustration the adults are experiencing is in finding employment locally. They desperately want to be employed and not dependent on state benefits. Most of them are well educated, holding qualifications. They include  a teacher who was teaching English and a qualified hairdresser. Many of the women were holding management positions in their home country. Their declared intention is to work here, to save and return to their homeland when hostilities end to help in rebuilding Ukraine.

The group organisers deal with daily challenges.  A young couple, newly arrived here in their car which they drove  for several days across Europe from Ukraine with their 11-month-old puppy which is fully vaccinated. Despite safely passing through several immigration and customs controls on the way, to their dismay the pup has now been quarantined in France. They want to bring him to join them in England as soon as their own paperwork here is completed.

The local communities in Gosport and Fareham have been generous in donating clothing, and toys and the group have access to adequate supplies of these at present. Donations of bicycles were very welcome and are being put to good use. Anyone who can help with offers of employment, who is interested in being a host or wish to offer friendship or other support should please get in touch at: farehamandgosporth4U@outlook.com.

PICTURED BY IAN GRIGG: Ukrainian guests and their hosts with Fareham’s Mayor and Lady Mayoress at last Sunday’s FWMC meeting. 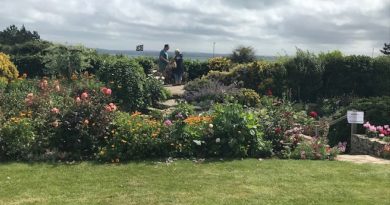 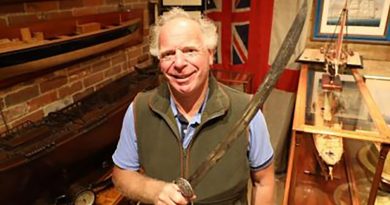