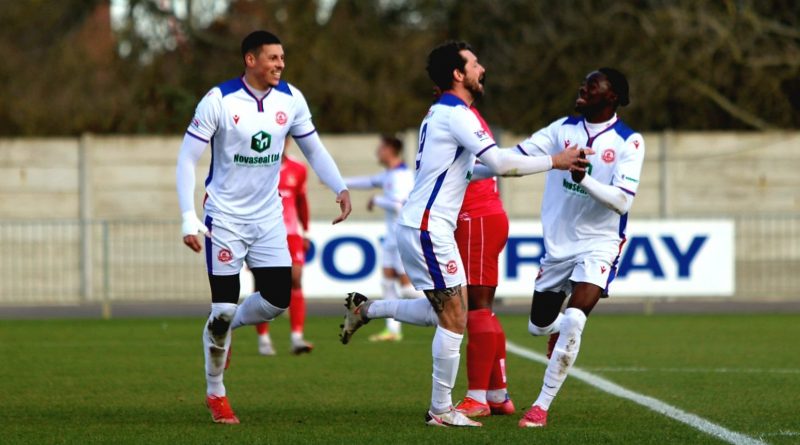 GOSPORT BOROUGH extended their unbeaten run to six matches as they secured a credible one-all draw versus promotion challengers Hayes & Yeading United at the SkyEx Community Stadium on Saturday afternoon. But despite a positive result this will feel like defeat for Shaun Gale’s side as they led until the 87th minute before a late equaliser snatched their richly deserved point for the hosts in London.

In dry but cold conditions Hayes started the better and saw their first opportunity in the sixth minute as Moses Emmanuel fired over the crossbar, whilst left back Jack Williams saw his angled shot miss the far post as it flashed across goal. Down the end Harry Kavanagh’s deep cross was missed by the head of Dan Wooden after 15 minutes, with neither side really testing the goalkeeper in the opening spell.

But the game did liven up as Hayes took control with several chances around the 20 minute mark, an incisive pass releasing Francis Amartey via a handball from the attacker, ultimately seeing his driven shot stopped by away keeper Fynn Talley with a brilliant save. Jack Connors then hit the post with an ambitious long range effort before Omar Rowe fired wide after finding space inside the penalty area.

Amartey then missed another one-on-one before the half hour via the post, but Gosport soon began to create chances as Billie Busari fired over the bar with a curling shot. And against the run of play an opening goal came for the visitors in the 33rd minute, Wooden rising highest from Harvey Rew’s high corner delivery and heading past Hayes’ keeper Jack Smith into the net despite a defensive pressure.

Gosport should have made it two-nil after a quiet spell in proceedings with half time approaching in the capital, winning a penalty on 43 minutes when Mason Walsh’s run was halted inside the penalty area. However Smith guessed the right way and dived low to his left to deny Rory Williams’ spot kick as the rebound was cleared away safely, with the referee blowing for the interval shortly afterwards.

Hayes started brightly in the second period as a throw-in from Williams found Amartey, the winger’s footwork creating space for a powerful shot that was saved by Talley; the away goalkeeper grabbing the fumbled ball before Emmanuel could slot home into the unguarded net. On 56 minutes another fine move for the hosts ended in Jordan Ngalo’s low shot being deflected for a corner down the left.

Ben Frempah headed over the crossbar from a set piece just after the hour mark as Hayes pushed in attack for an equaliser; Gosport’s defence standing firm and soaking up the pressure to protect their lead. Substitutions for both sides saw a slight lull in proceedings with dangerman Ellis Watts seeing a tame shot comfortably gathered by Talley in the 69th minute following a cross from the right winger.

Gosport had an enormous opportunity to double their advantage after 75 minutes as Walsh’s corner from the right caused some pinball inside a crowded penalty area, the final touch off the long legs of Luke Hallett hitting the post and the rebound was cleared away by the home defence. In response an in-swinging cross found the feet of Amos Nasha whose snapshot went wide and Rowe shot over the bar moments later.

Hayes finally secured their deserved equaliser on 87 minutes as a corner from Watts was floated into the six yard area to reach Frempah, the midfielder rising highest at the far post to bundle home past a diving goalkeeper. In the last moments of stoppage time, Gosport may have snatched all three points as a dangerous set-piece found striker Ryan Pennery; the effort blocked from close range before the referee blew for the conclusion shortly afterwards with points shared.

This point means that Gosport remain 5th in the Southern League Premier with just ten games left to play this campaign, other teams closing the gap on the play-offs with victories on Saturday afternoon alongside matches in hand on Shaun Gale’s team. Their next game will see them host Cornwall based Truro City next weekend at Privett Park, before travelling to Beaconsfield Town seven days later to end February.

PICTURED BY TOM PHILLIPS: Gosport players celebrate after opening the scoring versus Hayes & Yeading on Saturday afternoon, but were dealt blow as hosts equalised in the 87th minute to seal a deserved point in London. 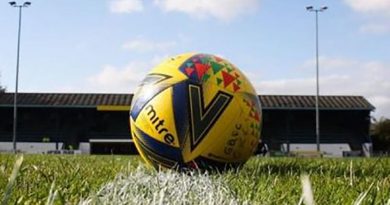 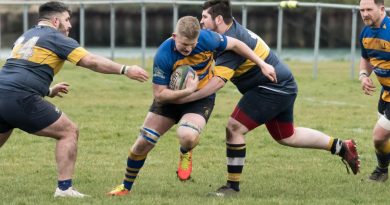