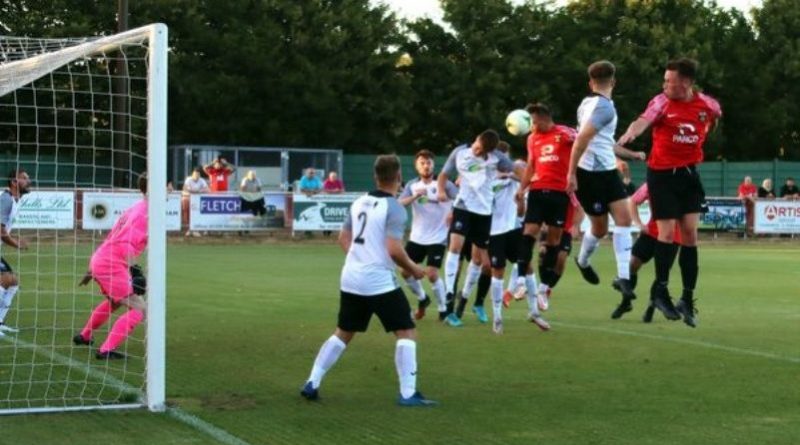 FAREHAM TOWN won their 1st opening Wessex Premier game of the league season since August 2013 on Tuesday night as they played AFC Stoneham, beating the top five club by a narrow one-nil margin at Cams Alders. It was Josh Benfield’s first half winner that helped seal the three points in front of a 314-strong crowd with the Creeksiders creating many further chances to score more goals, before resisting the attacking threat from their Eastleigh-based opponents on a dry and warm evening.

The first chance fell Stoneham’s way in the twelfth minute following an even start, their pacey winger finding space down the left and playing a dangerous inswinging cross that just evaded the diving centre forward in the penalty area. Down the other end Fareham saw their first opening five minutes later as Charlie Cooper advanced into the box with tricky footwork and cut the ball back to Callum Benfield, whose first time effort smashed off the bottom of the post before bouncing away to safety.

Fareham weren’t rueing their missed opportunity as they opened the scoring after 22 minutes from a corner, Casey Bartlett-Scott’s inch-perfect delivery being met by the unmarked Josh Benfield whose header nestled into the bottom right corner. This lead was nearly doubled as Connor Underhill and Jack Breed linked up with the latter’s shot going harmlessly over the crossbar, whilst the away winger Lewis Nagle glided an effort wide down the other end after 31 minutes as he tried to curl into the corner.

Stoneham created their best chance four minutes later as Matt Bainbridge found some space and advanced towards goal, his low shot being saved by the outrushing home goalkeeper Luke Deacon; the rebound falling to Nagle who saw his effort blocked at source. In response Fareham saw another two chances before the half-time interval as Breed saw a shot blocked on the line and Josh Benfield heading a corner wide under pressure; the hosts leading one-nil after a watchable first forty five.

The Creeksiders continued to push for a second upon the restart as Cooper went on a quick mazy run and cut inside the penalty area, his low shot deflected onto the far post before being well gathered at the second attempt by the Stoneham keeper on 48 minutes. A first substitute for the hosts saw Josh Benfield replaced by Marvin Rogers, who drifted a shot into the side netting from a fine through ball; whilst a low curler from Bainbridge down the other end wasn’t enough to test Deacon at his near post.

Tactical changes for both sides signalled a lull after the hour mark before Fareham saw the next real notable opportunity, Underhill getting to the bye-line and floating a cross into the path of Cooper whose powerful shot wasn’t on target as it flew wide of the near post. This seemed to spark the away side into life with 25 to play as they created a series of half chances; Jamie Bulpitt, Duarte Martins and Isaac Evans all going close with a variety of shots in quick succession as Fareham’s defence stood firm under pressure.

But Stoneham’s attacking intent did cause issues at the back that Fareham almost capitalised upon, a driven effort being spilt by the away keeper and falling to Callum Benfield who had his shot blocked by a defender on 78 minutes. From this point the Creeksiders reverted to game management tactics to protect their lead as two further changes were made alongside resistance of Stoneham’s attacking waves; the only chance in the final twelve minutes and stoppage time seeing Martins fire into the side netting.

It was a tireless performance from the Creeksiders as they overcame many mental hurdles such as first win and first clean sheet of the season, both aspects that didn’t come easily in the 2021-22 season.  Their next Wessex League game will see an away trip to Brockenhurst on August 13 but attentions will now turn to cup action with two upcoming ties over the next seven days; the first being Hythe & Dibden on Saturday in the FA Cup before travelling to Romsey on August 9 in the Hampshire Senior Cup.