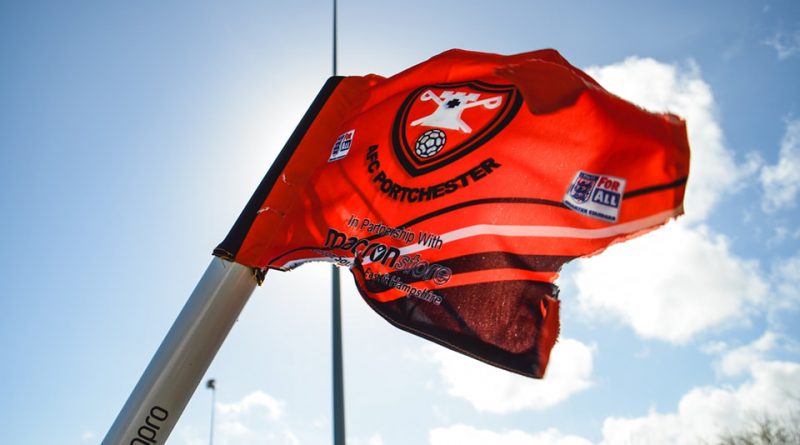 BRETT PITMAN’S headed goal helped AFC Portchester get off to a perfect start in the Wessex Premier on Tuesday evening, beating Cowes Sports one-nil in the opening match of the season at the On-Site Group Stadium. And their seventy-seventh minute winner was richly deserved in front of a large crowd of almost 400 supporters as the Royals created plenty of chances to score before finally making one count, sending the spirited visitors home disappointed and in defeat despite their efforts throughout the 90 minutes of play.

Kicking off at a slightly early time of 7:30pm due to ferry travel arrangements, Cowes started on the front foot with two chances within the first fifteen minutes to open the scoring. The first came when a loose ball found Ali Ahmed in the penalty area and his low drive was gathered by home goalkeeper Steven Mowthorpe, who was nearly caught off his line as John McKie attempted to chip him from thirty yards with an ambitious shot that dropped over the crossbar after nine minutes with the majority of home fans taking a collective breath.

Portchester did settle into the game as they created their first opening through Curt Da Costa, whose hooked effort from a corner was stopped by Cowes keeper Ed Hatt; which was soon followed by both James Cowan and Tyler Giddings going close. The Royals saw their next notable chance on 23 minutes as a big deflection found Felipe Barcelos breaking clear of the defence but the striker saw his shot blocked by the outstretched legs of Hatt, who also denied a shot by Ashton Leigh from approximately 25 yards out on the half hour mark

There was a slight lull in proceedings before the Royals had their final chance before the interval as Pitman picked up the ball on the left wing and turned his marker; smashing a shot that was heading into the net but for a slight touch from the defender turning it away from danger. And the hosts were almost punished for not taking the lead in stoppage time as Morgan Perrin saw a huge chance for Cowes; his well-hit drive deflecting through a crowd of players to create pinball in the 6-yard box that looped over the bar ending a goalless half.

Portchester started the better after the restart as Jake Raine’s effort thumped against the crossbar and Liam Robinson slid onto a deep cross from Leigh to fire over from a tight angle on 53 minutes; Pitman going even closer as he showed experience to hold off his marker but seeing his goal-wards effort blocked on the line by a fantastic covering defender. The striker also saw a header from a corner saved by Hatt, who also denied a second shot from Robinson just before the hour mark as the hosts appeared to get frustrated by the misses.

Substitutions for Cowes sparked them into life as they created two quickfire opportunities to silence the loud home contingent, the first chance coming when a defender headed wide a corner after rising the highest in a crowded penalty area. Shortly afterwards the pace of Tommy Jackson caused problems as he beat the rush of Mowthorpe to a long searching pass and tried another lob over the backtracking goalkeeper; his effort with too much backspin and was simply too powerful as it flew harmlessly over the crossbar from a perfect angle.

Buoyed by this let off Portchester sought about scoring their winner as the game reached its last 18 minutes; Cowan again going close with a header that flashed just past the bottom left corner under pressure with Da Costa’s effort saved by Hatt. But huge celebrations soon followed as they finally made a chance count on 77 minutes; Pitman creating space in the box and converting a deep hanging cross into the net to give his side a 1-0 lead that was defended with relative ease until the final whistle through excellent game management.

Three points represents the perfect start for the promotion-chasing favourites alongside the added bonus of a clean sheet, which gives them confidence going into the first few games of the campaign. They are due to play Blackfield & Langley on August 13 in the league, but the team’s attentions will now turn to the FA Cup. Dave Carter’s side will travel away to Corsham Town on Saturday afternoon in the Extra Preliminary Round, with the winners scheduled to play Sholing two weeks later away from the On-Site Group Stadium (20/08).